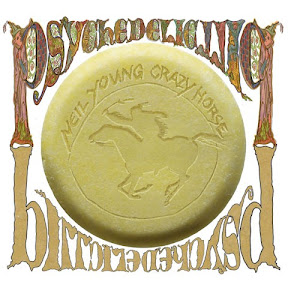 I am a cynical bastard and I don't have too many heroes. Neil Young -- particularly, but not exclusively, with his band Crazy Horse -- is one of my very very few musical heroes. But before you think that fact destroys my objectivity about the man's music, well....let's just say that it has been a *really* long time since I truly loved one of his albums.

In the 1970s, just about every Neil Young album was killer. I mean.... if you hold a gun to my head and make me pick my absolute favorites of his '70s stuff, I will head for the ditch a bit and name Tonight's the Night, On the Beach, Time Fades Away, Rust Never Sleeps and Zuma, but, damn, nearly *everything* he released in that decade -- -- save the tepid Journey Through the Past soundtrack -- is several cuts above the drivel of most bands' outputs these days. Can you imagine if some overrated bozos like Kings of Leon released something as good as even American Stars 'n Bars (which has its moments, but isn't near the top of the Neil canon)? God, the critics would be falling over themselves. There are very few indisputable facts in rock and roll, but this is one: Neil Young was pretty much unstoppable in the 1970s.

The 80s? Welllllll... they started OK, and then Neil had his famous row with Geffen Records, resulting in him releasing some really awful nonsense that was so bad that you had to think its suckage was intentional as a passive-aggressive middle finger to the industry (Landing on Water, anyone? Nope, me either).

Then, just when I thought he might have, artistically speaking, left the building for good, as the '80s rolled into the '90s, came Neil's Big Comeback #1. Freedom was a definite keeper, and Ragged Glory and the live album (Weld) that followed, were five-star-out-of-five journeys into the distortion-soaked/jam-heavy genius that is Crazy Horse at its best. It had to be obvious: Neil could crank out near-perfect records at will and he was just messing with us for that awful mid-'80s stretch. In fact, sometimes he was even *better* than in the 1970s. Listen to the glory of the Weld versions of both "Powderfinger" and "Cortez the Killer" and bask in the realization that Neil and the Horse circa 1992 were at the very very top of their game.

Except.... Maybe his omnipotence wasn't so obvious after all. What followed those perfect years of the early '90s didn't ever measure up to the standard that the Ragged Glory/Weld combo set. Sure, there were definite keeper moments on Sleeps With Angels, Broken Arrow and Mirror Ball, his collaboration with Pearl Jam where the boys from Seattle took on the Crazy Horse role, and, in doing so, lost some of the groove but sped up the stomp. And, hell, I even liked some of Greendale, even if its story line was delivered in an ungodly clunky way and even though the decision to stick rhythm guitarist extraordinaire Frank "Poncho" Sampedro on keyboards instead of guitar for that whole record was an inexplicable mistake that robbed the Horse of much of their oomph. Yeah, post-Weld Neil was all right. But the excitement was usually dwarfed by the yawn.

See, post Weld, there never was that start-to-finish genius album. In fact, I had pretty much given up on a return to the glory days when I heard the standards/covers album, Americana, that Neil and the boys released earlier this year. It was, oh, okay, I guess. It had some of the Crazy Horse loud/soft, jam/sing, crank-up-the-amps-and-the-pedals-for-the-sheer-joy-of-the-ruckus glory, but, for godsakes, it has "Oh Susannah" and "She'll Be Comin' Round the Mountain" on it and, for me, that was about all I needed to know. I listened. I gave it a chance. I hated almost all of it, and I hoped that somehow this year's tour -- the first for the band since Greendale and the first for me since Broken Arrow in 1996 -- would focus on something, anything rather than that new record.

Then, mid-summer, the announcement came from Neil: there is *another* new 2012 album from Neil and the Horse. To be released on October 30, it's called Psychedelic Pill, and it's all originals. My hopes went up a bit, but not *too* high.

Said hopes had taken a real hit with that Americana record.

Well, I am happy -- no, make that completely effing thrilled -- to tell you that Psychedelic Pill is a great record. It is the bastard son of Ragged Glory, crossed with all sorts of other bits from across Neil's career that leap out at you and then fall seamlessly into the swirling guitars. And god, those guitars swirl. It's like longtime producer David Briggs (R.I.P.) came back to fit all the pieces together into a maelstrom of rising and falling layers of guitar.

Half of the tracks -- "Walk Like a Giant," "Ramada Inn," "She's Always Dancing" and the opener "Driftin' Back" -- could fit right in with the "sing a little, jam a little" ethos of Ragged Glory's best. "Ramada Inn" also has touches of Neil's storytelling vocal style from Greendale, but where that album fell flat in the dynamics department, this one roars on the instrumental passages.

The shorter, less-jam-based, tracks are no slouches either, and each hearkens back to another chapter of the Crazy Horse history book. "Twisted Road" is a trip down memory lane to the first time Neil heard "Like a Rolling Stone" -- not all that lyrically removed from "Days That Used to Be" (from Ragged Glory). "Born in Ontario" sounds like a cousin to the title track from Everybody Knows This is Nowhere. "Psychedelic Pill" (the song) reeks of all the best parts of "Cinnamon Girl," and "For the Love of Man" could be a grittier track on Harvest Moon.

Another stroke of brilliance is the sequencing of this record. It is an "album" in the best sense. While its individual tracks are top-notch, its whole is so much more than the mere sum of its parts. Sure, the long songs alternate with the shorter ones; that's easy. But, even better, for my money, those longer songs keep improving as the album progresses. So, yeah, opener "Driftin' Back might start to wear on you a little (27 minutes *is* a bit much), but "Ramada Inn" tightens things up, "She's Always Dancing" a little more so, and, by the time you get to the raging, stomping, crashing fire of "Walk Like a Giant," you have loaded up the van, turned up the volume and headed for what Neil once called the place "where the pavement turns to sand." And then, when that one ends in a wreck of pounding drums and feedback, there's the "clean" version of the title track to take you into the sunset.

This record is not quite the picture perfect brilliance of, say, Tonight's the Night or On the Beach, but, man oh man, for a nearly 67-year-old guy who has, once again, discovered that he is at the top of his game when backed by the lumbering behemoth that is modern-day Crazy Horse, it is truly as close as you are going to get to Neil's Big Comeback #2. Get on it. I can barely wait for the upcoming tour -- with its setlist freed at this point from all vestiges of that Americana record -- to thunder into town. This band is, still, the real deal.