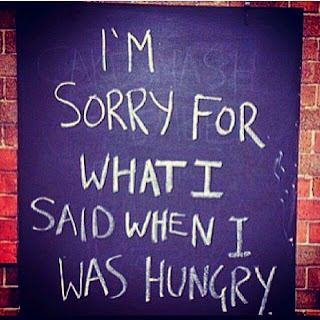 Recently, my paleo doc asked me if I would contribute a post to his blog during his office's "Spring Challenge." When I asked what topic he wanted me to focus on, he said, "Anything you think my patients would be interested in regarding your experiences with cleaning up your diet."

So I took my best shot, focusing on the number one benefit that I get from paleo/primal eating: better insulin management, which leads to properly managing my hunger, which means I am "hangry" -- so hungry that I am a miserable bastard to be around -- no mo'.

Choices, a.k.a. when everything else looks great but paleo made my LDL "too high"

"OK, so yeah, your LDL, whether we are talking LDL-c, which is what most doctors measure -- and that is a pretty worthless number, by the way -- or whether we are talking LDL-particle number, is definitely higher than 'normal.' But I'm not concerned. Your fasting insulin, fasting glucose and HbA1C are all normal. You have no inflammation via any of the many markers that we use. Your HDL is enviably high and your triglycerides are so low that your triglyceride-to-HDL ratio isn't just less than one. It's almost 1:2. And your Omega6-to-Omega3 ratio is 2:1. That's fantastic. It's thanks, in part, to all the sardines that you tell me you eat. Most people are running an O6-to-O3 ratio somewhere between 10:1 and 30:1, from all the processed carbs that they eat, and you are at 2:1. No. I'm not worried. Quit exercising? Start eating a lot of grains? Start drinking beer? I'll start worrying. But keep doing what you're doing and you'll be great."

I won't lie to you: going paleo is exactly what made my LDL go up. It used to be lower. When I was a whole-grain-pasta-devouring near-vegetarian, my LDL-C was, according to my regular doc, "great(!!!!!)." (I swear you could hear every one of those exclamation points in his voice). But my HDL back then was crap (somewhere in the low 40s or even 30s). My triglycerides were well over 100. I had Raynaud's syndrome in my fingers, and even toes, whenever it got cold, signifying, I learned later -- but no one (no one!!) told me this back then -- terrible insulin management. And I would get crazy hungry between meals. The regular doc told me back then that I was "the picture of health." He said he wished he "could sell [my] bloodwork numbers to some other patients." In retrospect, that seems insane. But it's sort-of not his fault. It's the "regular" version of what poses as modern fat-phobic/lipid-phobic medicine.

I also won't lie to you about this: I wish I could get my LDL, particularly the particle number, down to a "normal" range just by eating some other combination of real food. If I did, I really would be an across-the-board picture of health, bloodwork-wise. But, despite learning a few things about it -- like that alcohol abstinence makes it go up (!) and that alcohol consumption lowers it -- I have tried a variety of tricks and strategies and my LDL won't budge lower past a certain, still-high, point.

But let's not put too fine of a point on this: I feel freaking fantastic. I love the way I have my insulin management -- and, hence, my hunger -- under control for the first time in my adult life, thanks to five years of low-carb/relatively-high-fat primal/paleo living. I routinely go 6-8 hours between meals while awake without an issue. I don't walk around any longer with a stash of snacks to defeat "hangry" bad moods.

But yeah, my LDL is high.

So what should I do? Well, Door #1 says, "Statin." That would mess me up really nicely. Statins are linked with type-2 diabetes. Precisely what I don't want right now is the internal metabolic firestorm of diabetes. And diabetes runs in my family to some degree. So no. No statins for me. The second choice would be to go back to my old near-vegetarian way of eating. My LDL would likely plunge. Sadly, so would my HDL. My triglycerides would go up and my insulin management would get wrecked again. Or, I could listen to my paleo doc, and, for that matter, to my trainer, and to guys like The Fat Emperor -- all of whom swear that high LDL is simply no big deal in people who: (1) are not inflamed, and (2) have great fasting insulin numbers -- and just keep on keeping on with a low-inflammatory, clean, real-food diet that is free of processed foods, full of pastured animal protein, good fats and fresh vegetables, and also full of regular exercise and good stress management/mindfulness practice. As my trainer said, "Maybe it's possible that you have totally hit the sweet spot of paleo living and don't need to change a thing?"