I stopped eating fruit for now; here's why

I'm doing a little experiment, and it seems to be working.

I'm in pretty good shape fitness-wise for a mid-fifties dude. Nothing spectacular, but my deadlift is around 405 pounds, and my aerobic capacity rarely flags. I'm not remotely overweight (6'2"/180).

But good god, man, I'm banged-up. I have arthritis in both knees, my right elbow and both shoulders. It's mostly from 37 years of drumming (still doing that) and probably a bit from five-plus years of CrossFit (don't do that any more). I do what I can to avoid taking anti-inflammatory drugs, and most of that consists of keeping my version of paleo/primal on a low-inflammatory track. The food/inflammation nexus has been pretty obvious to a lot of us for a while.

But why the hell did my arthritis/creakiness seem so bad lately?

I could blame the pain on physical activity, but that's pretty much a constant; I haven't been ramping up my exercise (or my drumming) lately. So I decided to take a hard look at my food.

I cut out alcohol entirely for almost a month. Nothing. No effect.
So what the heck might it be? I eat: meat, fish, eggs, vegetables (but hardly ever any nightshades), a little cheese, a little heavy cream, coffee, water, fruit (various berries), and some nuts.

That's pretty much it. So I looked at that list and saw nothing inflammatory, except maybe the fruit and the dairy (and okay, theoretically, the nuts, but my O-6/O-3 ratio is 2:1, which is, as the doctors say, "fucking spectacular"). (Yup, that's what they say).

I hoped really hard that it was the fruit. :) Because cheese.

I like fruit, but I love cheese. So I started with fruit.

Realizing that I was eating a bowl of berries pretty much every day,  I vowed to eliminate them. My thought was that if fructose in the form of high-fructose corn syrup (HFCS) is an inflammation bomb, maybe some people (read: me) don't handle regular old natural fructose so well either.

I've told you before that I can do, or not do, just about anything if I think it's a healthy idea. Willpower is not my problem. Convince me that eating a handful of dirt every day is a solid health plan, and I am in. With bells on. The convincing is the only hard part. But quitting berries is not eating dirt. It didn't take all that much arm-twisting of the self-inflicted variety for me to give it a shot.

So I quit berries cold turkey. No gentle decrease. No trips to the berry methadone clinic. No hanging around sketchy street corners waiting to score some vaccinium cyanococcus. (Cue: Lou Reed). Cold turkey.

The result has been pretty dramatic. I was so used to limping the first few steps when I would just get out of bed or out of the car that, when I suddenly didn't limp in those situations within two days of beginning this regimen, I was all, "Whoa. No, really, wait! Whoooooaaaaaaaa. I feel much better than usual."

I miss the berries. But I miss the pain less. It's not 100% gone, but I don't expect it ever will be. I'm all banged-up and have hobbies that keep banging me up. I may try eliminating dairy too at some point to see if that makes an appreciable further difference, but the nearly-zero-fructose approach (I say "nearly" because it's in most vegetables in small amounts) seems to be a very good thing for my arthritis.

And I don't really know what to say about why there isn't very much on the interwebs about getting rid of fruit as a possible source of fructose-based inflammation. Everyone tells you to shitcan HFCS, but almost no one says that eliminating actual fruit might help too. That's probably because of anti-oxidant positives from fruit. It's generally good for most people. It's... HEALTHY!

But I'm not sure it's a good thing for me.

One of these nights, I'm going to eat a big-ass bowl of berries to test the theory. I bet my joints ache the next day.

To quote Hunter Thompson, and those in my chosen day job, "Res ipsa loquitur." 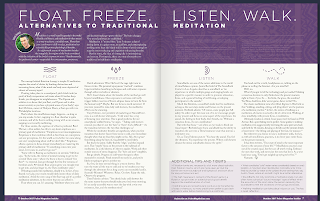 Last fall, the fine folks at Paleo Magazine had me write an article about alternatives to traditional meditation. I always viewed the end result as a sort of compendium of things one could do in addition to meditation, but, yes, you meditation-phobic folks can dig in too, if you want to just dip your toes into the Zen pond. (Then I'll get you hooked. Mwahaha).

The article ran in the Paleo Mag Insider, which is usually a limited-edition publication that only the highest levels of PM subscribers can get their (virtual) mitts around. But, as I said, they're fine folks over at the magazine, and they gave me permission to share the link to that edition. It's here. My article starts at page six, or you can read the whole thing by clicking on the photo above.

The best news? The PM folks liked it so much that they had me do the ultimate "prequel" article: about the What/When/How/Why of meditation. It's huge. It's in the April/May issue.
Posted by Steve Kirsch at Wednesday, March 21, 2018 No comments: