Angus King, the soon-to-be most powerful man in Washington? 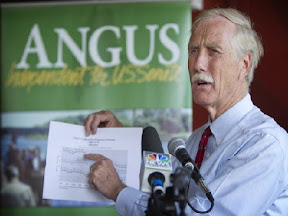 The way the numbers play out, there is a very real chance that one seat may control the battle for majority-party status in the U.S. Senate.

Here is my quick dorky political-junkie thought for the day: on Wednesday morning, the most powerful man in the U.S. Senate may be the independent senator-elect from Maine, former governor Angus King.

I happen to like Angus very very much. I am sure I don't agree with him on *every* last issue, but he is a moderate, socially tolerant, fiscally conservative, reasonable guy who could very well lead the charge on sensible issues like finally implementing Simpson/Bowles.

And here is the kicker: he hasn't declared whether he is going to caucus with Dems or the GOP. The strong money is on the Dems, but Angus is an independent-minded crusty Mainer who will know how to negotiate that decision into a positive benefit for the country. Don't bet the farm on which way he decides to go; it is nowhere near a sure gamble.

Brew the coffee. Prepare awesome snacks. Pour a delicious drink or two. Election night is going to be a total hoot.

- Posted using BlogPress from my iPad
Posted by Steve Kirsch at Friday, November 02, 2012