Fixing a forward lean on the back squat 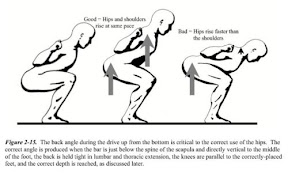 I am not a strength coach, or any kind of coach. Hell, I am not even particularly strong, but I make lots of mistakes and try to learn from them. So here's a solution that worked for me to a fairly common problem.

The problem: when a back squat gets heavy, the lifter has trouble maintaining an upright position, back on the heels. Instead, the lifter begins to pitch/lean forward. This is, to use a technical term, fucking scary, because it makes it much harder to ditch the bar if you fail the lift.

The solution -- completely and totally stolen from Greg Everett at Catalyst Athletics,who *is* a strength coach and made this suggestion on one of Robb Wolf's podcasts: front squat more. A front squat forces you to adopt a more upright position or you will lose the bar.

This was an amazing fix for me. For a few weeks, every time a back squat was part of my gym's programming, I front squatted instead. Boom. Problem solved. Next time I back squatted, I stayed significantly more upright. That upright position has allowed me to push my back squat numbers a bit and even finally allowed me to have the confidence to ditch a back squat behind me when I failed it, which was never ever an option previously. I always used to use a spotter when it got heavy.

Like I said, I take no credit for this idea at all. It came straight from Greg Everett, but I have passed it on to a number of people at our gym, each of whom had never heard the advice before, so I figure there might be a reader or two who could put it to good use as well.

*pic/diagram is from this site.