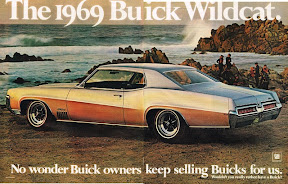 File this reminiscence under either "preposterously lucky" or that old saying about "there but for the grace of god go I." I was recently contemplating a simple question: what was the dumbest thing that I have done in my fifty years on the planet. I think this is it....

There is this amazing slowdown that time does when 4000+ pounds of Detroit steel and rubber goes airborne, especially when its airborne nature is the direct result of a purposeful decision to place it in that state, double-especially when you are inside that automobile.

When I was a kid, I was not a model of self-confidence, self-assurance, etc. Indeed, one could say that when I got my driver's license at age 16, I probably needed a stern talking-to. I was, pretty clearly, making up for a deficiency in the popularity/self-assurance column of life by asserting my inner Steve McQueen behind the wheel.

And, actually, it was a fortunate thing that I had a pretty good talent for it. A 1969 Buick Wildcat is a monstrous beast to have as one's first car. Enormously long, by any current standards, the damn thing weighed over 4000 pounds and had a 430 cubic-inch V-8 in it (that's over seven liters in Canadian; yes, *seven* liters). The going theory under which some of the more, er, retro parents of the time were operating -- and, let's be clear, no one was more retro and defiantly dorkishly uncool than my dad -- went something like this: "Those goddamn little Japanese tin cans are unsafe death traps. I wouldn't put my kid in one of those. No, siree. Junior is getting a 'Merican mo-chine." And, sitting in the driveway already was a then ten-year-old Wildcat. As the older of two sons, it defaulted to me first.

And let's not overstate my early level of prowess behind the wheel. I eventually got pretty good at whipping that monster around the twists and turns of the back roads of southeastern Pennsylvania, but there was a learning curve that went something like: (1) stop parking in narrow spaces (learned after denting the car to the right of me, whereupon I overcorrected and dented the one on the left); (2) stop driving in heavy traffic or on busy roads, because, Christ, that car was huge and not really up to fast maneuvering in tight spaces (learned via numerous near-misses); and (3), eventually, figure out the back way to *everywhere*. Back roads -- twisting and turning over hill and dale -- became my playground.

See, there is a funny thing -- still true to this day, I believe -- about local Pennsylvania driving: the local cops aren't allowed to use radar. The state police can, but, once upon a time, some (hot-rodding?) legislators decided that the local yokels couldn't "handle" radar. So they limited its use to the state cops. This means something very basic: barring some other technological device -- like those speed strips that are across some roads, or VASCAR, whatever the hell that is -- local speed limits in Pennsylvania are slightly more, er, *optional* than in other states. If you see a local PA cop, you have more time to correct your enthusiastic ways because he has to get up to your speed, behind you, to track how fast you are going.

And, god knows, I became enthusiastic.

This little trip down memory lane is the product of the convergence of a few things: (1) last weekend, my brother and I got together with our buddy Sean for the first time in 30 years; we had a great time (all of us are, dare I say, now responsible citizens who turned out pretty damn well); (2) recently I had driven past Sean's old house, which was the scene of the most thoroughly dangerous, ridiculous (and repetitive) stunt which was pulled in that car; and (3) the fact that this story is amusing only in hindsight because I am a very very lucky man who could very well have ended up dead or in prison.

There's this road that Sean lived on. He lived just past the bottom of a very steep hill. At the bottom of that hill was a small bridge, over a very small creek. That bridge was built, as many are, with a rather large hump in the middle of it.

If you came flying down that hill and hit that hump at 60+ miles per hour in a 1969 Buick Wildcat, said vehicle would go airborne. It would not merely go a *little* airborne. It would go all Dukes of Hazzard/Smokey and the Bandit on you. Four tires in the air for what seemed like a while, and, obviously wasn't all *that* long. But it was one hell of a lot longer than a car is *supposed* to be airborne, which is not at all.

And then it would hit the ground. Hard. And fast. And I must have been a *pretty* good teenage driver, because the road wasn't very wide, and the car didn't always land perfectly straight, so some, um, quick tactical maneuvering was often necessary.

We did this a lot.

And somehow, some way, we (me behind the wheel, Sean and my brother along for both the ride and the encouragement of the driver) never got caught doing this. We never almost killed anyone, except perhaps ourselves. We never beheaded the little old lady who lived at the property right at the bridge and who had to cross the road to get to her mailbox. In fact, we never even came close because she somehow was never outside when we pulled this crap. And I say "beheaded" because, yeah, that's what would have happened; *that* is how airborne we got. Perhaps most amazingly, the *car* took this repeated abuse for a very long time. Until it didn't.

It was a number of years later before we were headed down a busy street (yeah, eventually, I figured out how to drive those), long after we had finally stopped treating the car like a participant in a demolition derby, when it became apparent that the body of the car was suddenly separating from the chassis -- rather quickly at that. At the point I decided that operating the vehicle was impossible, the wheel was turned 90 degrees and the car was tracking sort-of forward, in a kind-of parallelogram shape. When I called for the tow, if you had drawn a line from the rear left corner of the car straight forward, by the time you got to where the front left corner of the car *should* have been, you would have been standing about two to three feet away from where it really was. A parallelogram. I kid you not.

My dad could never figure out what happened.

Anyway, what is the point of recounting all this? I don't know. It really was idiotic behavior. No one -- I repeat no one -- should do this kind of thing, but it actually taught me a few things in hindsight when it was time for my kids -- both boys -- to drive. First of all, that "big cars with giant engines are safer" stuff goes right in the crapper when the driver is a teenage boy. Secondly, know your kid. If your testosterone-filled youth seems poised to get all his self-esteem from showing off behind the wheel, well, you might wanna have a talk and do some figuring about when and where and how he graduates to unsupervised driving. Finally, and perhaps most importantly, there is nothing like making sure that talk includes an utterly realistic, undramatic, but firm mention of prison to deter a restless youth from acting out behind the wheel. People go to jail all the time for this crap when it goes wrong, and your kid should know that. Me, I am a lucky man. It never went wrong. How that can be, I don't know, but I try to live and learn.... And pass it on.