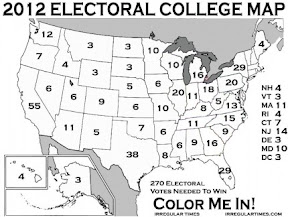 So.... Here we are two days from the presidential election. Using a, er, sophisticated blend of reading just about every political site you could think of, plus some sort of gut-level intuition that has gotten me pretty good results in the past (e.g., I got every state right in 2000 except NH, which, of course, meant I got the overall election result *wrong* because NH's four little electoral votes made the difference), it's time to make the pick.

(By the way, I am not going to set forth a pick for every state for you, because we *all* know who is going to win *almost* every state).

There are a vaunted nine states that really matter and appear to be, more or less, truly in contention. They are, in no particular order: Ohio, Florida, Wisconsin, Iowa, New Hampshire, Virginia, North Carolina, Colorado and Nevada (by the way, pronounce that first "a" like the one in "cat," not the one in "almond"... Really... It isn't debatable like "Missouri" v. "Missourah"). There is also one potential swing *district* because two states -- Maine and Nebraska -- split the allocation of electoral votes partially by congressional district. Nebraska, this time, is beet red, but the more rural district in Maine, district 2, is a bit closer, so it makes the swing list along with the aforementioned nine states.

You could also throw in, I suppose, Michigan, Minnesota and Pennsylvania, but they are Obama states that only recently have been labeled "swing"-ish, and I don't think Romney has quite enough gas in the tank to win any of them (although PA may be closer than anticipated). Missouri used to be a swing state too, but is now, on the presidential level, red as can be, so that is off the list too.

Of the nine swing states, and one swing district, here are my picks:

When you add up all the votes, I think that is going to be a popular-vote victory for Romney, and a 270-268 squeaker for President Obama in the electoral college.

Of course, this prediction could all go to hell very easily. First of all, I suppose that Pennsylvania could shock most of the pundits and go for Romney. On the other side of the coin, Iowa, New Hampshire, Maine-2 and Virginia could all go Obama; I just think there has been enough of a change in mood since 2008 in those formerly Obama states -- or, in the case of NH and Maine-2, enough favorable memory of Romney as the reasonably moderate governor from a state nearby -- that Romney will squeak out wins in those. Colorado is another funny one. I ended up calling it as solidly, but narrowly, Romney, but the presence on the ballot of a marijuana-legalization referendum could boost Obama's numbers, or maybe even boost libertarian Gary Johnson's in a state where Johnson's vote totals could well exceed the margin of victory for the winner. And then there is Wisconsin, which has been flirting red in a bunch of presidential elections in a row, and is Paul Ryan's home state, but I think, when the chips are down, it will again go blue like its colder, bluer neighbor to the immediate west that still holds Hubert Humphrey in saintlike regard.

In the "surer bet" category, Ohio and Nevada seem solidly in Obama's corner as do Florida and North Carolina for Romney.

It's is going to be great fun on Tuesday night. I hope I can stay awake long enough to know the result. *That* is the least-sure bet of all.