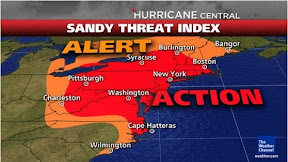 The bottom line is that we got really lucky.

The power's out, but last year, post-Hurricane-Irene, we made an executive decision of sorts and splurged on a full-house generator. It's something that I, literally, didn't realize existed until, just after Irene, I saw a genius ad by the Generac company. I knew you could go to your local hardware center and buy a portable, gasoline-powered, generator to run certain things, but I had no idea that there was a more permanent solution available to power most of the house. This thing is huge and is permanently hooked up to a natural-gas supply line. The electricity cuts out, and, within 30 seconds or so, the generator kicks on. It's important stuff because we live in an area with well water, and electric well pumps require, er, electricity. And not having water really sucks.

So, while I am hoping that the electric company does much better than their current estimate of restoring power to us six days from now (six days?!?!?), in theory anyway this generator will do us fine until then -- just with a significantly higher gas bill than usual.

Anyway, I apologize for not having any tales of Bear Grylls-style survivalist routines, but it just wasn't a *huge* deal right here in terms of actual damage, and, mind you, we were right on the northern side of the hurricane's eyewall where the wind was ripping. It was, on the other hand, a little tense to say the least in terms of thoughts like, "Holy shit. It's windy. It sounds like the siding is peeling off the house and a freight train is passing by within five feet of the window even though there aren't any train tracks in the area," and the like. All those thoughts are greatly enhanced at 2 a.m., two feet from a second-floor window.

But that doesn't mean I am completely absent of thoughts about this storm. So here, in no particular order, are a few of them:

-- First of all, even though we got lucky, a whole lot of folks didn't. Keep them in your thoughts, and, most importantly, send the appropriate charitable organizations some money to help them through this mess.

-- It never ceases to amaze me how one's focus can instantly narrow to the essentials when necessary. We used to always run into this phenomenon up in a friend's cabin in Maine on one of our early winter trips up there to play music and hang out. There was no heat source beyond the fireplace, and it wasn't rare to have it be 15 degrees F when we would arrive. *Everything* would center around staying warm. All the other thoughts and worries that you might have brought with you to the cabin? Gone in a flash. This hurricane was a lot like that. There are a thousand potential things to think about and focus one's energy on in a given day. Not so much when Mother Nature is beating down the door. It's like forced meditation.

-- What a lousy piece of timing it was for me to decide on Saturday that I have been drinking both alcohol and coffee too often lately. "Too much alcohol" equals just a daily drink the last couple weeks, but, dammit, it messes with my sleep when I indulge even that much. So does any caffeine after noon, unless I am going to be awake a lot later than usual for some reason. As a result, I resolved Saturday to knock out the booze entirely for a little bit, and limit myself to one cup of coffee each morning. God, it worked like a charm. Sleep was well on the way to being fixed within a day or two, but reading all my friends' Facebook posts about their epic hurricane alcohol stockpiling just made me want to pour a delicious whisky or two. I didn't. My willpower is pretty strong, especially when I know there will be an immediate negative effect, but, yeah.... The timing could have been better in the fun department.

-- I realized that sometimes -- in some sort of vain effort to avoid putting on my reading glasses, I guess? -- I shop by color. So there I was, buying a little extra dark chocolate for the ensuing storm. Lots of dark-brown packages. Yup. Half of it turned out to be milk chocolate, Shit. I ate it anyway, mind you, but shit. Not only is dark chocolate so much healthier, but I really like it much better. The offending item was chocolate with cherries in it. The dark version of that sounds unbelievable. The reality of the milk-chocolate version was a disappointment. But I still ate it. Let's not be silly....

-- Dogs are a riot when it comes to intuition. Our three (two older, one younger) are great almost all the time. But the youngest -- a hound named Ruby -- needs her exercise. Fail to walk her at least once a day for a decent couple of miles at a good clip, and she will torture you, the other dogs, everyone for that matter, with hyped-up energy levels. But somehow -- and really, I don't know how -- she figured out that the weather was so bad that she wasn't getting walked. She has been sleeping almost all the time for over two days now. Amazing.

-- The election is only a week away and, although Romney is nipping at the president's heels, I have to think the hurricane -- and both of their responses -- is a net political benefit to the president. Romney looks like a jackass. I just saw him at a political rally first urge everyone to put politics aside and think of the hurricane victims and then, a short time later, urge everyone to get out and vote early -- for him. So much for "apolitical." In contrast, the president looks, well, presidential. I have told you elsewhere that I am not a huge fan of either one, so don't view this as an endorsement, but the contrast has been striking.

-- But, much like last year, during Irene, the award for Awesome Governance in the Middle of a Natural Disaster goes to NJ Governor Chris Christie. The man is utterly above politics during this type of event, and, instead, just gets the job done. Hell, he even went out of his way to praise the president's response, despite the fact that he is an ardent Romney supporter. Well played, governor. Well played. I don't always agree with you, but this was, and continues to be, your finest hour.

-- Finally, it is almost impossible at this point to imagine this type of disaster without social media. You are stuck in the house, roads closed, etc., but somehow it is comforting as hell to get on Facebook or even Twitter just to see what your peeps are up to. Utterly ridiculous and fluffy most of the time too, but there ain't nothing wrong with a little fluff in the midst of the madness.

That all I have for now. Hope you and yours are safe.