Why I'm voting for Gary Johnson for president in 2012 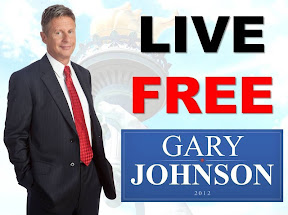 I don't do overtly political posts very often. It's more likely, if I touch politics at all, that I do it from the sidelines, as a casual -- but *very* interested -- observer of the side show from either party.

I have explained before. I lean pretty well libertarian. I am, to use a phrase I wish I had thought of, "pro-choice about everything." I generally believe in personal and economic freedom, and think the first option in drafting any bill ought to be to favor liberty and encroach upon it only when necessary to further a very specific, well-defined goal. On the other hand, I never have really embraced Ron Paul. I don't know much enough about the Fed to get all whackadoodle over it like Ron Paul does, and all that racist stuff in his old newsletters gives me great pause before I would ever even consider voting for him. (Plus, I do not, for the life of me (pun intended) understand anti-choice libertarians, but that's another topic for another day... Or probably not).

But this year the Libertarian Party has nominated former New Mexico governor Gary Johnson for president, and I have found, after reading a lot about Gary Johnson, that, unlike Obama or Romney, I agree with almost every single point of his platform. He appears to truly be "pro-choice about everything."

That never happens. Usually, because when the chips are down I will choose personal freedoms over economic ones if forced to do so, I end up voting Democratic for president as a "lesser of two evils" type of situation. I don't like government in my bedroom or my wallet, but the former offends me even more than the latter. And, if you forced me to choose, I would pick Obama over Romney if only because I don't have a freaking clue what Mitt Romney stands for. That fairly moderate guy who was governor of Massachusetts? I could vote for him. But this version of the Mitt? He seems to run to the moralizing wing of his party at every turn for solace. But President Obama? I would love to have a beer with him, y'know if I actually drank beer anymore, and I think he is plenty smart and even mostly well-meaning (although, to digress, what the *hell* is up with the raids on medical marijuana facilities, sir?), but I truly do not believe he thinks the national debt is a very big deal.

And I think he is so very very wrong about that.

If the president had wanted to seize the moment, save the day, and maybe even be the Greatest President Everrrrrrr, as the kids say, he would have gotten behind Simpson/Bowles, which had as its selling point the fact that it caused pain all around *and* fixed the problem, and ridden that nasty bill into the end zone through the mud, muck and mire. To victory.

But he didn't. He has been kind of a crappy leader on this point. A nice guy. A good guy. I don't question his patriotism, his citizenship or any of that. But I don't think he is taking this debt problem seriously.

And Mittens? I don't know who the hell he is. Really. I think he wants to be president so badly that he would say or do anything to get there.

And, by the way, I live in New Jersey. Combine the fact that one vote never decides a presidential race with the fact that if the president needs my vote to win New Jersey, he is in very deep doodoo for the overall race, and I have decided something:

I am voting for the guy I like the best. And that, right now, is Gary Johnson.

Go to his website. Look at his platform. I agree with most of it, much more of it than I have ever agreed with anyone on. (I am not sure about the Fair Tax, but at least it is better than a tax code so large that no one but a tax lawyer can truly decipher it). He believes in government leaving us the hell alone to live our lives except in very well-defined, limited circumstances.

He also looks like he tells the truth. Every time. Ask him what his position is on anything and he will tell you. No obfuscation. No political "figuring."

You can tell me that I am "wasting my vote." That's crap. Yes, it is extremely unlikely Johnson will win a single state, let alone the presidency, but, as I just explained to you, my vote in New Jersey is pretty well "wasted" anyway. At least a vote for Johnson is a statement of principle, and at least It does something to advance a political agenda in which I believe very strongly, particularly a serious approach to debt reduction that puts aside ego and pet projects and self-interest in favor of actually getting something done, so there's, y'know, maybe actually a positive balance sheet one day, instead of doom followed by gloom. In fact, maybe it is somehow possible that if enough people vote for Johnson, whoever wins this thing will realize there is a disaffected center in American politics that would like to see a solution, not more problems, when it comes to the debt. And then, maybe, just maybe, Simpson/Bowles will reappear.

So I am ordering the Gary Johnson bumper sticker. I am putting it on my car. And I am voting for the guy I like the best.

When you pull the lever for whomever in November, I hope you can say the same.