Book review: The Power of Community: CrossFit and the Force of Human Connection by Dr. Allison Belger 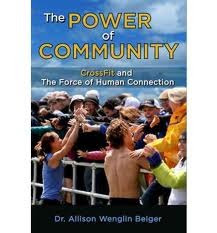 Last week, right at the same time that I had just planned to crack open Dr. Allison Belger's book -- The Power of Community: CrossFit and the Force of Human Connection -- we got word that my brother-in-law had taken his own life. He was just a few days short of 46 years old, and he died alone.

I didn't know Brian terribly well. He lived several states away and we saw him once or twice a year at family gatherings at holidays. We got along well, though, out of a shared sense that almost anything was fair game for humor. He was a smart, funny guy, and you should know by now that smart and funny are my people. But, over the twelve years that I knew him, you could see a light beginning to fade in the past few years. Unemployment in a bad economy and the depression that resulted took their toll on him.

And what I kept hearing from his friends and family this past week when they would talk about him is how he had withdrawn into himself, and how their best efforts to get together with him in recent years were usually rejected by him -- not rudely, but rejected nonetheless.

At one point my wife, who, obviously, was crushed by her brother's death, and I both agreed: this is all sad proof that everyone needs people. I don't care what your community is, but you need one. Brian withdrew from all of that, and it can't have helped his depression.

I have known a number of people over the years who have just kind of checked out of society. And it never has worked out well.

I think some of us lose our way when the subject of community comes up because there are those of us for whom the single greatest source of community in the USA -- a church or other religious house of worship -- doesn't hold any attraction. In fact, I have little doubt that a large portion of the new membership in many houses of worship is in attendance not merely for the spiritual angle that they get from it, but also for the sense of community that is admirably present in those organizations.

But what if, like me, joining a church isn't likely to be in your future plans? Is the inevitable result a lack of community in your life unless you are otherwise fortunate enough to have some professional or military organization to help you get that sense of belonging that we all seem to need?

Well, it is certainly not the only way, but what about CrossFit?

My wife and I belonged to a standard-issue globo gym for nine years. During that time, I believe I can count on two hands the number of people with whom I ever had a conversation at that gym, and can count on about three fingers the number to whom I regularly said hello, and with whom I routinely had any more than the most mundane conversation. The regular old gym is a weird place of insular behavior committed in large numbers. It's like everyone walks around wearing those "cones of silence" from Get Smart. 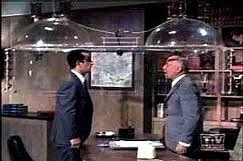 CrossFit gyms are nothing like that. We all know each other at our local "box." If a newbie walks into a CF gym, it is a pretty strong likelihood that within moments that person will be approached by and then engaged in a conversation with someone -- maybe the gym owner, but maybe, if the owner is a busy trainer tending to other things, just one of the clients. See, unlike all those other gyms, at CrossFit we regular members actually want you to join. We want to let you in on the secret: that hard, intense group workouts foster goodwill and community. That part of what makes this so awesome is the people. And that those people aren't just going to end up being your workout partners. They will end up doing charity events with you, running 5Ks with you, watching your dog when you're out of town and playing volleyball at your house.

Well, Allison Belger -- a practicing psychologist, co-owner of four CrossFit gyms and a CrossFit Games competitor -- wants you to know all that too, but she went the extra miles and wrote a book, and it's sort of a quiet little masterpiece.

See, by and large, I like books like that Matt Foreman one I just reviewed -- the kind that, with great humor, self-effacement and very little subtlety, grab you by the throat, or some more sensitive part of the anatomy, and haul you into the tale where the author is often the protagonist and he or she simultaneously cracks you the eff up and imparts great life lessons amidst joyfully nutty behavior, possible debauchery and good times. In those books, the reader leaves feeling un-subtlely empowered and awesome, and generally high on life.

I like punk rock for all the same reasons.

But Belger's book -- The Power of Community -- is nothing like that. First of all, she is not the star. She has cred -- in the fitness *and* psychology worlds -- out the wazoo, mind you. But she is almost entirely telling the tales of others. And all of those stories head for a common ground -- that CrossFit is so much more than a fitness program; rather, is an empowering community.

It may be that right around now that you, the more cynical reader, is, amidst gentle vomiting noises, wondering where your gleefully cynical paleo drummer has gone, replaced, apparently, by some sort of Up With People bot-person Bono clone.

No, I'm still here, and yet, despite having a seemingly over-developed cynicism gene, I *really* like this book. Like I said, it goes about its job quietly and, dare I say, academically and brilliantly. So it's a little different than my usual fare. But by the end, you'll be beset by a burning urge to go give things a shot at a local CrossFit box, or, if, like me, you are already a CrossFitter, you will head to the gym with even more enthusiasm and hope there are people out there who maybe have lost their way in life a little in the area of "community" who might join you.

Much of the book is spent profiling others. In the early chapters of the book, the focus is often on members at one of Belger's gyms who have experienced any number of catastrophic events in their lives. The tales of how the members at that gym rallied behind fallen colleagues are inspiring. But where the book really took off, from my perspective, was when the stories switched focus from that one gym to a myriad of examples of extraordinary efforts by CrossFit gym owners around the country -- people who have started organizations like Steve's Club, the Disposable Heroes Project and others which have as their goals not merely helping their friends, but reaching out into the communities and using CrossFit to advance the lives of others.

I recall during one of the early chapters thinking, "Wow, that's a hell of a group of people you have at that one gym in San Francisco." But by the end of the book, instead, I was marveling at how CrossFit gyms and members *all over* are creating communities, often ones that go far beyond the walls of their gyms. Some of the most moving stories focused on recovering addicts who have used CrossFit not as a substitute addiction, but instead as a reason not only to never relapse themselves, but also to help others clear that hump forever.

It's powerful stuff. Like one of Belger's gym members says in the book, "I love CrossFit. It lets the rock 'n' roll live inside me, in a healthy way. I am more rock and roll power cleaning than I ever was doing a Jagerbomb." Or, as a special forces captain told CF founder Greg Glassman, "We've learned through CrossFit the formula for camaraderie, and I can now duplicate it anywhere. It's agony coupled with laughter." And in a group dynamic, the community that results from that agony/laughter hybrid is amazing and impressive.

Get Allison Belger's book. It won't have you laughing as much as Matt Foreman's, but for flat-out inspiration it is tough to beat.

- Posted using BlogPress from my iPad
Posted by Steve Kirsch at Monday, May 14, 2012