Time for football "protective" gear to do a small-scale disappearing act? 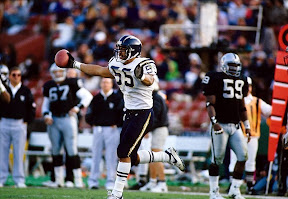 It's a damn shame about the death of Junior Seau. He was a hell of a football player, and I say that as an Oakland Raiders fan since I was seven years old. My team never had Junior on the squad and we were worse off for it, as the pic above demonstrates.

And I, like everyone else, have no idea if he had a brain injury from years of football, but, whether he did or he didn't, the powers that be in the NFL and other football governing bodies are going to be forced into some decisionmaking about equipment in the future, because a lot of people are getting seriously hurt playing this game. And it is a great game, but we should be striving to make it as safe as possible without changing its core.

Two simple facts: players are bigger, faster and stronger than ever, and many, if not most, defensive players have learned how to use their protective gear, especially, but not only, their helmets, as weaponry to inflict pain and damage on their adversary.

A simple proposal to consider -- and when I say "consider," I mean "consider," not necessarily adopt, but I think it needs to be part of the thought process: how about scaling back the gear? Significantly.

See, here's another simple fact: despite resembling, respectively, a schoolyard fight and a prison riot, rugby and Aussie-rules football don't have anywhere near the level of injury involved as does American football. And that's true even though our football players dress like Robocop. But those players in those sports don't wear much gear beyond a mouth guard and a cup.

I think we American footballers have to start considering losing the Robocop look in favor of something closer to the old-school leather helmet, shoulder pads and cup. Yes, really. 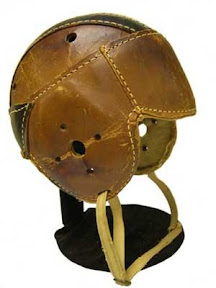 No one knows how to tackle the old-school way anymore. The classic wrap-and-drop tackle has given way to smashing the man down, often using the pads and helmet as destructive devices. This morning I heard Willie Geist accurately describe the typical NFL game as involving a neverending series of "small-scale car accidents." That nonsense would stop if the defensive player were afraid of ringing his own bell if he "tackled" like that.

The theory is really that simple. Take away the "weapons" and the safety factor goes way up. And let's be serious; I am not proposing turning the NFL into Wuss Camp. This would still be a hard-hitting game, but one in which the perpetrators of the hard hits would have to pay a mighty price if the hits are delivered the way they are now. You aren't likely to spear a guy with your helmet if the helmet is one of those little leather contraptions.

Think about it, NFL. If you do it, everyone else would follow. If not, figure out a better solution, but for eff's sake, do *something* because the game we all love is doing serious damage that it needn't cause.

- Posted using BlogPress from my iPad
Posted by Steve Kirsch at Thursday, May 03, 2012