30-day paleo challenges are easy, but then what?

"And I said to myself, 'I'm never going to do this again.' I finished my drink. It was the last one I ever had....
My goal was provisional and modest: one month without drinking. For the first few weeks, this wasn't easy. I had to break the habits of a lifetime. But I did some mechanical things. I created a mantra for myself, saying over and over again, 'I will live my life from now on; I will not perform it....'
The first few weeks stretched into a month, and then after thirty days, I already felt better physically.... In the mornings, I felt clear and fresh....
But I had one major ally among the regulars [in the bar]: the bearded poet Joel Oppenheimer. A few months earlier, the doctors had ordered him to stop drinking and he'd followed their orders....
'You won't have as much fun,' Joel cautioned me. 'But the fun will really be fun.'"
-- Pete Hamill, from "A Drinking Life"

That book is maybe, just maybe, the best memoir ever written. It is, despite its title, not really *about* drinking at all. It is about living.... Living a very very full life. Alcohol is a prop through much of it -- a near-constant companion of the author, but it is never his raison d'être, even at his lowest. He doesn't quit booze until the very end of the tale, when, at age 37 or so, he just stops cold, tells you about the quitting process in five pages or so, and the book ends.

But, when I recently went back to A Drinking Life -- and I like to do that.... occasionally dive back into familiar, but amazing, books headfirst, just like I'd turn on Exile on Main Street, or the first Clash album, or (double swoon) Double Nickels on the Dime, just to bask in the glory one more time -- I realized something:

Everything Pete Hamill says about feeling like an outsider once he quit drinking applies to how you feel when you ditch the standard American diet (SAD) and go paleo/primal. You are suddenly like a teetotaler in a bar. There you stand at the post-work gathering, or at your friend's birthday party, or at a restaurant with your buddies, and you are the freak. They are downing pizza and wings and nachos and you are ordering a burger without the bun and dumping it into your side salad while everyone stares as you order extra guacamole, or ask the server for some olive oil.

And you do that in the beginning, likely with the same attitude that Pete Hamill had about quitting drinking: I just need to do this for a month.

And if, like a whole bunch of people at our gym, you are coming up on the end of a thirty-day challenge, you are also approaching an interesting crossroads: do you keep up this paleo stuff or lapse back into the SAD?

"I will live my life from now on; I will not perform it."
"You won't have as much fun. But the fun will really be fun."

Those are the two lines that stick with me the most.

See, I am not going to pretend that, if you keep this up, you won't miss the pizza and wings. You will. But you also won't miss the weight that falls off (or maybe fell off already), the flab that's been replaced by muscle because you have been hitting the iron instead of the keg. You certainly won't miss being told by your doctor that you are bordering on (or maybe well into) Type-2 diabetes, and, if you are my age, you will not miss aching, swollen joints in the morning, reduced energy and the craziness of hunger brought on by grain-induced insulin spikes and crashes.

If "fun" is stuffing whatever the hell you feel like into your mouth at every turn, then no, you won't have as much fun. But I swear to you that the fun that you have really will be fun. There are not only filling, delicious meals, full of meat, vegetables, fruit and good fats. There is renewed energy, good health and just plain *feeling better*. There is everyone in your workplace (or on your softball team or in your church group or wherever) wondering why they keep feeling like shit everyday and you seem to be bouncing, full of life and vitality.

You can live your life to its fullest instead of performing it in the way that so many people do. While they are stuffing in the cookies and snacks, wondering why the "diets" never work, and generally being miserable, you can continue eating until you are full, barely snacking at all and feeling better than you ever have.

Keep it up. The fun will *really* be fun. 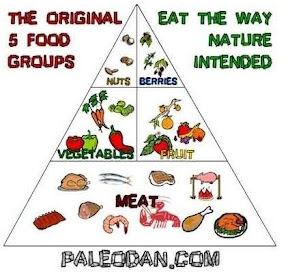