So there I was, talking nutrition, exercise, blahblahblah with a friend a few weeks back, and she said, "OK, Mr. Paleo, what do you feed your dogs?"

Aware that she and at least two other friends of mine feed their dogs nothing but raw meat, I knew where this was headed. So, instead of trying to justify lazy behavior, I fessed up to being a fairly anthropomorphic type, and admitted: we feed them dog food from a bag. It is pretty top-notch, y'know for food from a bag, but it is full of grains, not the meat that carnivorous dogs are born to eat. And I really am an anthropomorphic type. Everything else being equal, I would a save a human before a dog. But.... I want to do the best for the dogs and, after a whole bunch of research, I came to a basic conclusion:

It's pretty simple; we would be much nicer to our dogs if we fed them what nature intended.

So, we did some *more* research and, today, we made the leap. Let me introduce you to the players in this game. This is Lydia, age 11, a staff-terrier/lab mix: 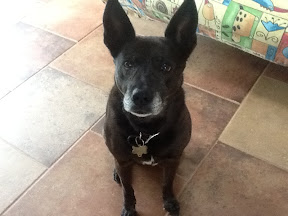 This is Holly, a seven-year-old purebred golden retriever: 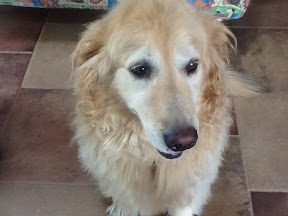 And this is trouble, er, Ruby -- a.k.a., The Big Rubowski, Rubella, The Rubonic Plague.... She is some sort of hound, age 1. She was billed as a "yellow lab." She is not a yellow lab; she is a hound. She could smell a microscopic drop of blood on an asteroid several hundred thousand light years away. Her nose is unreal; she is a hound. We adopted her last year when she was found, only a few weeks old, with her siblings, in a box by the side of the road in Mississippi: 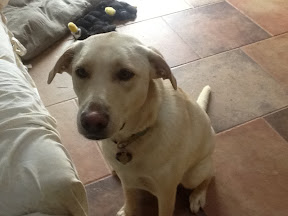 She isn't *really* trouble, or not much. But she is more than twice as active than the other two combined and she has absolutely no stay-at-home sense. She has been hit by a van, with no noticeable long-term damage; although it is certainly clear post-accident that she will not be attending MIT. Previously, we had high hopes.

This is a chicken: 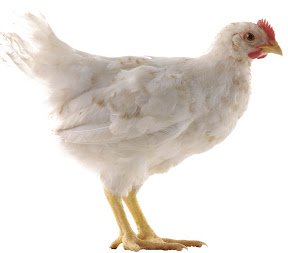 The idea of this diet is to turn the chicken loose in the yard, and let 'em at it. So we did....

You didn't really believe that last part, did you?

The deal is this: they get *all* their nutrients from the meat, raw. So you have to include bones, organs, fat, skin, etc. The smart people on the interwebs tell me that a mix of 80/10/10 meat/organs/bones is best, but they also tell you not to stress about individual meals. Just make sure the overall mix is close to that.

So the first few weeks are going to be chicken-based. Whole chickens. Everything but the feathers, head, neck and feet. About 2% of ideal body weight per day for the older ones and 3% for the youngster. Adjust accordingly if they get fat or skinny.

Lydia *destroyed* it. She dove right in, chomped up every bone and left not a scrap. It was no big deal. The other two took more time. They fretted over pieces that were too large, too bony, too whatever.

And then, about ten minutes into the fretting, they flipped completely, tore through it, crunching up bones with every bite, and generally acting like ravenous, carnivorous beasts.

It was pretty awesome. They looked *so* happy.

So I have big hopes. Lydia and Holly are both arthritic, and I know what paleo has done for my creaky joints, so I am hoping it helps them too. The Rube? Maybe she will have an unrivaled long life of meat-filled joy. Overall, I am hoping to have drastically reduced vet bills. Proponents of this diet claim that many people end up spending less on their pets, when minimal vet bills are factored in versus the old high-cost vet bills of the grainy diet.

This is cool. Our dogs are paleo. Even cooler: our dogs are even happier, it would seem.
****************************
UPDATE: After six days, I can't say I see huge changes in their coats yet, but their collective breath is much better. They also stay full longer and bug us less at mealtime. But the most unexpected change is that Ruby, the disgusting one, has almost completely stopped eating poop. (The other two never did). She used to use her dog sisters as vending machines for poop snacks, often eating it before it even hit the ground. She would also gleefully snack on it anytime she went outside. Always *their* poop, not hers (I guess *that* would be gross?). But suddenly, she is hardly eating it at all. I read somewhere that poop-eating is mostly about the dog wanting more protein, and I wonder if the meat-itarian diet has satisfied that need?

OK, except for this text message I got from my wife:

"Instead of eating Holly's poop, Ruby is rolling in it. Progress? I think not."

Fortunately, so far, *that* appears to have been a one-time event.

Posted using BlogPress from my iPad
Posted by Steve Kirsch at Tuesday, May 22, 2012