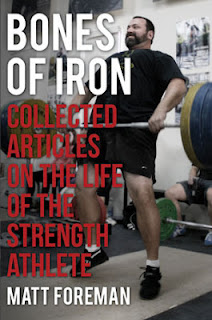 A simple caveat: if you don't ever lift a barbell, I am thinking Matt's book is going to bore you, perhaps to acts of violence. Indeed, you may already be kicking the puppy now just from this review. Stop it, and move on to something more interesting, and less violent, if that's the case.

However, if you have ever -- even a little -- experienced the joy of the iron,
you can find a lot to like here. You might even find it a bit inspirational.

Bones of Iron is written from the POV of a guy who "found himself" (my term, not his) by powerlifting in his teens and then moving on to Olympic weightlifting where he found great success as both an athlete and a coach. He transitioned from a shy kid into a brash one and then into an adult, and the twists and turns of it all, and his ultimate progression into a good guy, mentor and coach had a lot to do with his choice of sports and those who influenced him along the way. And he tells you the whole story, but in the context of a collection of articles originally written for the Performance Menu, the journal at Catalyst Athletics. You could bounce all over it, just reading articles that piqué your interest. But the book is best tackled start to finish.

There are three sections: Training, Competitive Experience, and General Athletic Experience. But the whole damn thing addresses all three areas and does so in a way that not only would hold the interest of a competitive weightlifter, but also me (a relatively crappy weightlifter, but one who gets a world of good stuff out of the sport). Best of all, even when Foreman deals with a coaching- or competition-related topic that you might otherwise think would be too specialized for the average gym goer, he manages to do so in a way that not only is engaging, but actually informs even the lunkheaded, like myself. For instance, an article about coaching is addressed, on its face, to coaches (durrrr), but even the not-so-bright athlete can glean info from the same article that will assist in picking a coach or trainer, or in choosing whether to retain one when there is "trouble."

And, most importantly, Foreman is smart, funny, self-deprecating and self-aware. It's a good combo for a writer and he wears it well. Plus he has cool frames of reference (e.g., an article entitled "Third Snatch From the Sun" that ends with the line: "It's as simple as standing next to a mountain and chopping it down with the edge of your hand.")

And if he didn't have me sold with Jimi, the Bo Jackson references a few pages later got me -- an Oakland Raiders fan since the days of Daryle Fucking Lamonica (yes, that was his middle name) -- hook, line and sinker.

Foreman never gets preachy, but you know where he stands, with appropriate hyperbole: (from "Fatties") "This doesn't mean that making our kids dig ditches in the back yard for eight hours a day in their pre-teen years is going to solve all our sport and social problems, but it couldn't hurt anything."

He waxes nearly poetic about what might not inspire others to verse, but its *his* passion, dammit, so he can delve into "the spiritual principles of squatting," throw in a Marley (Bob, not the dog, not the Christmas Carol dude) reference, and get out alive and intact, spewing life-affirming wisdom.

And if you *really* want inspirational, buy the book and read the one called, "So runs my dream, but what am I?" No, I am not going to tell you anything about that one, except that it almost made me cry *and* want to go lift something heavy, all within the same page.

It's a good trick.

If you do, you will get to bask in lines like this:

"Hey, this is like the awkward stage children have to go through. You're like the little boy who came to school and found out the hard way that the cool kids don't pull their pants all the way down around their ankles when they pee at the urinal."

And you can read white-hot/on-target rages against selfish "new school" athletes and parents who have no respect for other competitors or the sport:

"If you just got back from Dick's Sporting Goods and you're excited to give little ten-year-old Tyler a shirt you just bought him that says, 'I'm number one and everybody can lick my butthole,' so he can wear it to youth wrestling practice tomorrow, then I guess we probably have a difference of opinion. But here's some food for thought. What if Tyler shows up to wrestling practice with his cocky new shirt, and then he gets pinned in sixteen seconds by some tough little Mormon kid? At that point we can safely say that Tyler is NOT number one, and that shirt is gonna look pretty stupid. Don't humiliate your kids."

And he is always unfailingly plainspoken and clear. He gives you "The basic blueprint for not becoming a jerkoff," which Foreman then readily admits he has violated with impunity in the past.

So, just buy it. Everyone will win. You'll love it. Matt Foreman will get a little coin from the deal, and if you and he end up not getting along, post something on the Catalyst Athletics Facebook site and I am sure he would be glad to help you out by following his own advice: "If you [and your coach] have any tough times, try using an exercise where you both sit down and write a poem about each other. That sounds like a special way to share feelings of happiness. Just don't start your poem with the line, 'There once was a man from Nantucket.'"

- Posted using BlogPress from my iPad
Posted by Steve Kirsch at Thursday, May 10, 2012