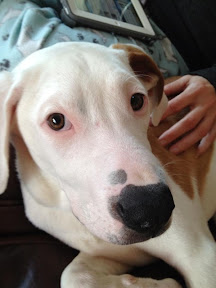 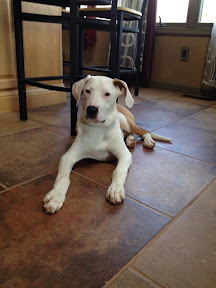 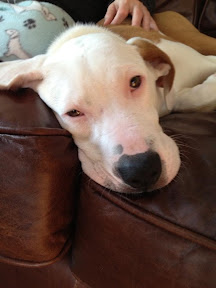 OK, not quite true.... When we adopted him eight days ago, he really was afraid of *everything*. Within an hour or so, he had learned to trust my wife to a degree that he wouldn't do what he was still doing with me a couple days later: cower and run away whenever I walked into a room. But even that got a little better each day (or more like each hour).

Today, he completely trusts the two of us. But, he is still pretty scared. Yesterday, he spent fifteen minutes at the very very end of his leash, hiding in a flower bed, when a neighbor down the road decided to stop me to talk, mid-dog-walk. On that same walk, he cowered and sat down, shaking, because a fire hydrant scared him. I took Milo to visit my adult son who goes to school in Philly. By the end of our hour with Kevin, Milo stopped cowering, as long as Kevin didn't do anything bold or outrageous, y'know like look at Milo, or stand up from a seated position.

Establishing this dog's trust and boosting his confidence that everyone in the world -- particularly every male human -- is not about to kill him is a work in progress. And it's progressing....
He has obviously had some serious trauma in his puppy past related to men. I don't even want to bother mentally constructing the scenario of the dog-fighting ring he was probably exposed to, or whatever. He pretty clearly had a rough time of it in North Carolina where he was found.

But, as Milo is learning, it gets better, and everyone does not suck.

Really, it gets better and everyone does not suck. And the ensuing analogy is pretty obvious....

You have a right to be really angry -- angrier than you have ever been -- at what happened in Boston last week. You also have a right to be on your guard, and to insist that authorities do the same, as well as prosecute and harshly punish the person(s) responsible.

But, as Milo is learning, even though trust comes slow, trust is also essential to happiness. So, yeah, be wary, but don't forget that, as Milo is also (slowly) learning, most people out there are not trying to hurt you, and most people deserve your respect. And you will be a lot happier and less hate-filled if you do. More specifically, most immigrants, or people of a particular nationality, are not the enemy. Yes, inevitably, there are a few, and we have, just this past week, seen both the fortitude of this country and the overwhelming skill of our law-enforcement agencies to come together and meet that challenge, and to learn from the past.

I am one of those non-jingoistic, non-hating patriots who simultaneously thinks both that this really is the best country in the world *and* that we always need to strive to do better. Maybe there is something that could have stopped this bombing from happening. I don't know. But what I *do* know is that law enforcement has *that* angle covered. They are amazing and are hard at work.... Just like my wife and I have it covered when it comes to making sure nothing *actually* kills Milo.

Our job, as non-law-enforcement citizens, is a lot like Milo's: recover from the trauma of the past, (re)learn the difference between appropriately on-guard and being afraid of everything, and, yeah, remember to wag your tail and lick someone's face.

It gets better. Remember that. 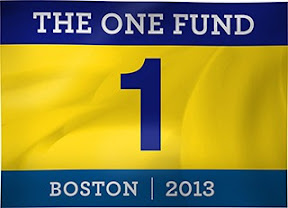 Go here to donate to the One Fund Boston.