Soon it'll be in the rear-view mirror.... 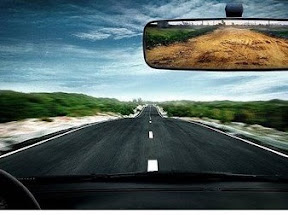 Every now and then I update you on the madness that has been the last 20 months or so. As I told you here, with a link to previous rantings on the subject, my elderly dad lost his mind to a sufficient degree back in August 2011 that he had to be put into a nursing home.

At that point, the bulk of a huge job fell onto me: cleaning out his house. If I called him a hoarder, you probably would get a good idea what it was like, but I never really thought of him as a hoarder, per se, more of just "a guy who didn't throw much out."

Which is a hoarder. I just never thought of it that way.

So, in an effort not to lose *my* mind over the situation, I tried to take the long view: I had all the time in the world to clean the place up, so calm the fuck down.

That sounds good, but I never *really* calmed the fuck down. No, it hasn't been something I think about every day, but it is always there, like some sort of shadow of doom following me around -- disappearing, seemingly, on a very sunny day at noon, and then returning soon after.

So, I plodded my way through the job. I live 50 miles away from that house. I have a life that has nothing to do with that house. So I did what I could, here and there. Seven dumpsters later, the place was finally empty as of a couple months ago.

Seven dumpsters. And not those little compact ones that they have behind the local fast-food joint. No, seven full-size dumpsters.

Then, more recently, the contractors were hired, because you wouldn't expect that a hoarder would have done much renovation, now, would you?

So, paneling was removed, drywall put up, a new kitchen put in, hardwood floors refinished, bathrooms updated. It was an enormous job.

And now, it is, I am happy to say, totally done. It goes on the real-estate market next week. It looks amazing.

When it sells, I suspect my blood pressure will drop ten points.

And no, despite the fact that I grew up there, I have no wistful thoughts about the place. No fond reminiscing. Fuck that. It's not that I had a bad life as a kid there. It's just that all that good stuff has long ago been eclipsed by the drudgery of cleaning up after a crazy old man, who, quite probably, was crazy long before I ever suspected it.

These are the little tests that life presents us. And if someday I look back and think that this is the worst I had, I will have been very lucky.

But for now, there is no looking back. Step on the gas pedal. Drive on.