"Is this paleo?" A.k.a.: Fooling yourself with "paleo" things? 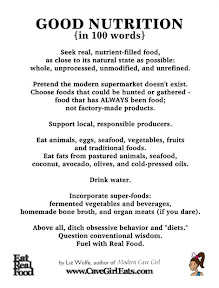 You hear it a lot around people new to paleo/ancestral eating: "Is this paleo?" Usually the person is referring to something in a package, with ingredients. Because if that person were talking about real food, he or she wouldn't have to ask. It would be pretty obvious whether the food is on the good or bad list, you know...of "paleo" or "non-paleo."

And it is at that very point that I begin to wonder: has the word "paleo" gotten kind of useless? Or weird?

Or maybe I meant useless after all.

Or maybe "useless" is kinda harsh, but, if it's a package you are holding, with more than one ingredient listed on it, and you are contemplating eating it as anything other than an occasional treat, you might be entirely missing the point of "paleo."

Yes, if you are going to eat something from a package with ingredients, it is generally better if those ingredients are "paleo," but here's a suggestion (unless, again, we are talking an occasional treat): instead of trying to find paleo things in paleo packages, do what the above manifesto -- from Liz Wolfe at Cave Girl Eats -- says: eat real food. Real food...Things that aren't in packages and, you know, they go bad if you don't eat them soon after buying them.

There are a lot of versions of "paleo" out there, but, keeping in mind that this all started as an ancestral/evolutionary-based way to eat clean unprocessed foods, the way to do it with the focus on health, longevity, gut integrity, etc. is to -- imagine! -- eat real unprocessed foods as often as possible.

Note that I said "as often as possible." Starving occasionally and facing a choice between some "paleo" energy bar and a Snickers? Sure, go for the paleo option. But note the formidable presence of the word "occasionally" in that sentence. The point here is, first and foremost, to eat real unprocessed* food as your daily routine. So every time you open a package, "paleo" labels notwithstanding, consider that -- with very rare exception -- you are off-course.

Going off-course here and there is to be expected. Going off-course every day? Or buying tons of allegedly "100% paleo"** snacks*** for daily consumption? I think you got fooled by the word "paleo."

** Just today I saw an energy bar advertised online as "100% paleo." It has honey in it. It also has "egg white protein powder," which I don't recall ever being produced by a chicken in nature. Again, eat the damn thing if you want to, but it's not meant to be any regular part of an ancestral diet focused on unprocessed food.

*** By the way, I am looking at *you*, the paleo/ancestral consumer, not the companies making or selling these things. Just as it is your job generally to feed yourself in a healthy manner, it's your job as a paleo eater not to feast on processed snack food every day. (Indeed, some of those companies -- Paleo Kits by Steve's Club, for instance -- are funding really great charitable work, and that is awesome, but that doesn't change the fact that they are selling food intended to be occasional treats, not daily nomnomnom sessions. You didn't think you were supposed to feast daily on Ben + Jerry's just because they were saving the rainforest, did you? Good charitable work is wonderful. But it doesn't (or shouldn't) make something unintended for daily consumption suddenly part of your regular diet).

- Posted using BlogPress from my iPad
Posted by Steve Kirsch at Monday, April 08, 2013