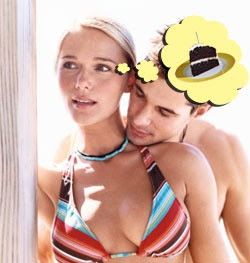 Apparently, a whole lot of you are hung up on That Favorite Food -- you know, the one that isn't allowed on a paleo challenge. You are sweating bullets without it, full of drama and exclamation points in your Facebook postings. Your LOLs are a little more OL. Your OMGs are more drawn-out/elongated OOO.MMM.GGG. than simple OMG and, generally, your thought processes devolve into cravings at the drop of a hint of a suggestion about That Food.

You could give 13-year-old Ashley and her friends at the mall a run for their money right now in the drama department.

So, a few things about all that, and maybe a little light at the end of the tunnel too? First, I'll probably piss you off, if I haven't already:

-- Keep some perspective. As the smart folks over at Whole 9 once said, "Don't you dare tell us this is hard. Quitting heroin is hard. Beating cancer is hard. Drinking your coffee black Is. Not. Hard." Hint: they aren't just talking about coffee.

In other words, the more you can knock off the drama and just deal, the better this will be. This whole exercise is, in part, an effort to help you, as Dan John says, "stop eating like a child." It's helpful if your attitude is similarly adult.

-- Remember why you are doing this. To detox for a month. During the detox, you feed yourself spectacularly well. After the month, you really may be able to add back in *some* of the delicious things that you miss with minimal negative effect, if you do it in a smart way. Let's talk about that:

Fast forward a few weeks. You have been challenge-compliant. You haven't reignited inflammation by cheating on your food. Your body has had a month to heal your gut. You know, your gut -- the place where most of your immune system is located.
Your post-challenge, non-cheated-upon gut is a sparkling biome of sparkliness (my Thesaurus is on summer vacation). It is ready to, well, party.

The first thing I will tell you about post-challenge life is what the boss always told the other cops on Hill St. Blues: "Let's be careful out there." If you flood your newly-healed pristine gut with a load of godawful food, you may find yourself in a seated position more than usual, in one particular room of your house, if you get my drift. Go easy on the new intestines. They like you so far. Don't make them all hateful and angrypants with you.

Secondly, unless you want to have no idea what the hell is going on inside you, early on in this post-challenge adventure don't combine your off-road food excursions. In other words, if you are going to drink alcohol for the first time post-challenge, don't also eat something else that is off the reservation or, if things get ugly, you won't know which food caused the problem. And becoming a properly-informed eater is a lot of the goal here. Remember, I eat paleo/primal, but I also eat whatever I want.. Because I have figured out what I want.

Then, most of you are going to find the following demarcation between food types:

1. Things with gluten.
2. Everything else.

Gluten is awful for most people. It is an inflammation bomb. It makes your joints hurt and destroys your digestion. Eat gluten and your intestinal lining separates and sends microscopic poop-i-cles (yes, a real science-y word used by scientists) into your bloodstream and inflames your whole system as a result. It is an especially terrible thing to insert in your newly-healed sparkly insides, because the rainbows and unicorns that frolic joyfully there after a well-executed paleo challenge are *very* gluten sensitive. They like gluten like Flyers, Devils and Isles fans like the Rangers. And they react accordingly.

It can be pretty ugly. Or it can at least be degrees of ugly. But even if all you get from the gluten is a massive bloat and a truckload of regret, you have likely damaged your insides into non-sparkliness and restarted evil gut permeability. It's a colossally stupid thing to do. In fact, if you are planning on doing that, I don't know why the hell you are bothering with paleo in the first place.... (Ooh, he's getting crabby again).

So... Beer. Drink something else. If we aren't clear on that, let's try again: drink something else. Or find a gluten-free beer. But gluten-y beer (and it is almost *all* gluten-y) will destroy most of the gains you just made. So will wheat in any form -- cakes, cookies, breads, pasta, pizza. I am not a fan of "gluten-free" products, but if you just can't live without a cookie every now and then, at least a gluten-free one is just bad for you and not catastrophically awful.

Really, the line is that clear. So if you are going to drink alcohol post-challenge, drink wine, cider, hard liquor (even if distilled liquor started with gluten in the grain, e.g., whiskey, the distillation process destroys the gluten... Nice to know, huh?). Ditch the beer, or ruin everything all over again. If you "need" something that normally has gluten, treat yourself with the gluten-free version.

Then there is everything else -- the non-gluten stuff. Whether your personal craving revolves around dark chocolate, peanut butter, white potatoes, hummus, beans, rice, cheese, whatever, you quite likely will find that some of that non-gluten, but still non-paleo, stuff -- in moderation, here and there -- *may* not throttle you too much.

Now let's be clear, I am not you. The person sitting next to you is not you. Your new shiny internal biome is your own thing and has its own sensitivities and predilections. But here is an example: me. I can eat really good from-grassfed-cow cheese a couple times a week with no ill effects that I can tell. Ramp that up to every day, and I break out in a zitstorm. Eat shitty cheese more than once in a long while? Not good. Zits, queasiness, reflux. Beans or hummus? I am cool with them about once a week. Eat them multiple days in a row, and the digestive rumblings are heard in Kurdistan. White rice, which really is just non-gluten starch: I can eat that pretty often, especially post-workout. Brown or wild rice? It irritates my insides. Dark chocolate is cool here and there. Everyday dark chocolate is not my pal. Alcohol? A drink or two once a week and I am mostly cool with it. More often, I get fat (bloaty) and weak (my deadlifts and squats *suck* the day after alcohol, and reflux reignites from its normally-dormant state). Liquid dairy is, for me, an express ticket to a primo seat on Thomas Crapper's favorite modern convenience. Ice cream? Somewhere in between cheese and liquid dairy in its effects. But have it very often and things ain't right.

How did I figure all that out? I tried it, here and there and noted the effects. I am also not a perfect human being by a long shot, and have had those death-food binges and paid dearly for it with bad skin, poor sleep, reflux and worse. (And once you death-binge, *everything* non-paleo becomes an irritant).

And remember, by and large I am not concerned about my body comp. I am not as strong as I wish I were in some sort of perfect world; nor is my body-fat percentage in the single digits. But I am happy with where I am -- open to improvement, mind you, but content and not freaking out. So if I can maintain, with mild improvement, I am cool with that. You may be coming from somewhere else entirely. You may be unhappy with body comp, or you may be actually trying to make the CrossFit Games. Although these two types of people are worlds apart in their fitness and their goals, they actually share something in common: if they want to achieve those goals, they can't fuck around. Their ability to go off-road with food is going to be pretty small. And none of their goals are achievable with alcohol. (Yeah, you read that right).

So, what is the point of, oh, these many paragraphs? We'll recap:

-- do the challenge right (drama-free!) and don't cheat.
-- once the challenge ends, gluten is still your sworn enemy, but other non-paleo foods may not always be so awful.
-- experiment sensibly post-challenge, with non-gluten non-paleo foods and you may actually figure out how *you* should eat. This can only happen if you know what your goals are and eat in a way that doesn't trip you up on the road to achieving them. That could change your life in a really really good way.