Paleo perfectionism, a.k.a., Everyone, please calm the f%^& down 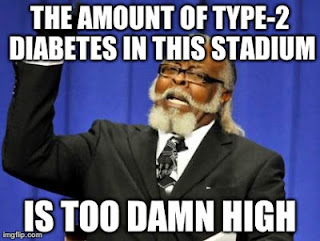 If you are trying hard to do this thing right, that's awesome, and here's the thing: you should be really really happy with awesome.

I repeat: keep doing your best, but if you fall down, just get back on the paleo/primal horse and forget about all that perfection nonsense. Sure, you can strive for perfection, but when it doesn't happen, just move the eff on, and keep on living as best as you can.

This thought particularly hit me the other day at Citizens Bank Park. My wife and I were there to see a Phillies game, and our friends, whom we were meeting outside the gates because we had all the tickets, were running a little late. So we sat down under a tree, and waited 15 minutes or so, watching the people head into the stadium, and...

It was kind of appalling.

I mean... I realize that the cross-section of people that we were dealing with is best defined as: "Those who like to gather in large numbers, eat fried food, drink copious amounts of beer and watch other people play sports." But, Jebus, man.... *way* too many folks there were really overweight, and really sick and having trouble walking a relatively short distance without assistance.

It was awful, and it was something that, living in my CrossFit/paleo-centric world, I don't see often in that kind of sheer, unspeakable volume.

People are not healthy, yo.

And I am not ridiculing them. They can do whatever they want. (I *have* made that clear by this point of this blog, haven't I?) Sure, I hope for their health and happiness that they pick a better path, but it's their call.

But you paleo/primal/CrossFit/healthy people, for the love of all that is good and right, stop beating yourselves up over a drink, a dessert, a body-fat number that maybe isn't the *absolute* ideal. Yes, do your very best, but when your very best is an oversized serving of Ben and Jerry's, enjoy the bejeezus out of it, and then get back to the plan. No guilt. No bullshit. No emotional breakdowns. Just get back to the plan.

If you do that, you'll be *fine*. And the rest of us will notice you for all the right reasons as you walk into a stadium.