The science experiment begins, a.k.a. How I learned to stop asking, "Is this paleo?" 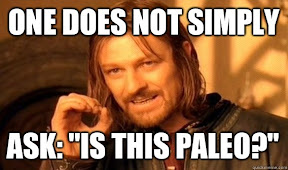 As you probably have figured out already by the innumerable references, the CrossFit gym that I belong to is in the middle of a paleo challenge. You know, a 30-ish day headfirst dive into paleo eating to detox, blahblahblah. I get the impression that a lot of the folks doing it were not terribly familiar with the "rules" of paleo before it started. In fact, I think they got pleasantly cajoled into doing this and then figured out somewhere between leaping off the high-dive platform and hitting the water, metaphorically speaking, that they had precious little idea what the hell was going on. "Oh shit...." Splat.

How things change, though.... We are about ten days into this thing as of today, and I think that, 500 or so "Is this paleo?" questions later, we have made some pretty cool progress. People seem to have seriously readjusted their thought processes about food. Some people (we call them the high-achievers) are even starting to think about post-challenge eating and what that will be like.

Let me be clear, if I haven't already: I am not at all convinced that paleo challenges awash in absolutism are actually the best way to *begin* to get your food in order. Yeah, I think eating paleo is awesome, but some people are not as good as others at the high-dive/deprivation nature of a challenge. So, a while back, before this challenge started, I suggested that if you really want to lock this stuff in in a successful way, rather than in a competitive/hardcore exercise in extreme self-denial, you might want to taper down your crappy eating by first eliminating grains and *then* dialing up the rest of your paleoista routine. But that takes time, and challenges are not intended to go on forever.

But, whether you employ the hardcore-challenge method or use gradual tapering, it all gets you to the same place: figuring out how to eat.

As much as I like helping people out regarding food choices, the goal here is actually that you never have to ask me or anyone else *that* question again -- you know: "Is this paleo?"

The real question is: "Is eating this a good idea?" And the real goal is having *you* take charge of your food choices, rather than mindlessly stuffing in the contents of whatever packages happen to be within reach, or always asking other people how *you* should eat. The paleo template is going to give you a nice general guide to follow, but really, outside the confines of a "challenge" who the hell cares if something is "paleo" or not? What you should care about is whether it is going to make you feel good, bad or somewhere in between, and then, like a big boy or big girl in possession of big-boy or big-girl pants, you get to make a rational decision whether you are going to eat that thing.

It's all a big science experiment, performed by you, on yourself. I eased my way into paleo a few years ago and haven't stopped playing around with it since. I figure that, like life, food choices are (or ought to be) an *ongoing* project in self-improvement, not a quick sprint to a figurative place where you stop and think, "Ha! I made it and I never have to think about that stuff again!"

So... When you get to the end of the challenge, you know that word "paleo?" Don't worry about that so much. Paleo rules are a solid guidebook on how to eat, but your goal should be to reorient your brain into making your own good choices, not following a rulebook written by someone else. Yeah, that blog roll on the right side of this page -- where so many of the heroes of "paleo" reside -- is a great place to go for ideas, even advice. (There is stuff on those blogs that will blow your mind with new ideas, strategies, etc.) But this is ultimately *your* deal. You may find that certain foods (maybe nuts or nightshades or whatever), despite their paleo nature, just don't make you feel good. So don't eat them. Or do, and deal with the consequences. Other non-paleo foods *might* not always bug you. Maybe you will find the damage is in the dose. Whatever. Try it and see. Or maybe you will find that you are happiest dialed into the paleo "rulebook."

Most likely, you will find that a large dose of intelligent self-experimentation is in order. Preconceived "plans" of how to eat, paleo or otherwise, are stupid... Until you've tried them out. And the stupidest thing of all is following someone else's rules without making sure they are right for your individualized snowflake self.

So read. Research. Try things out. Think. Evaluate. It's your life. Own it.


- Posted using BlogPress from my iPad
Posted by Steve Kirsch at Wednesday, June 12, 2013