This is utterly personal, has nothing to do with music or paleo eating, and probably doesn't belong on this blog, but, screw it. I'm the only one here and I am in such a good mood over this. Skip it if you choose.

See, for the last five years, from January through April, I have played in a rec co-ed "non-competitive" volleyball league in Philly called SLAM. Our teams don't have clever names, just numbers. All along I have been on Team 1. It is a group of 11 funny, smart people, and I think I have previously made it clear that I love funny, smart people. I really love my teammates. They make me laugh. I sometimes make them laugh, and they always put up with my burning (it's a bit much, really) desire to win. Some of them even share it, truth be told (but yeah.... It's a bit much, really).

You would not, however, pick us out of a photo lineup as stud volleyball players. We have some great players, mind you, but we don't really look the part. One of us is in his sixties, three (me being one of them) about to turn 50 over the next few months; no one's going to mistake us for the Olympic team based on looks. In fact, I suspect that we are older -- on average -- than most of the league.

But, damn, we play well together, and we have fun. We have stupid, goofball cheers to start each game, and from each restart from a time-out ("Yum, yum, Team 1" being the stupidest and, consequently, the most-used).

But some of us (me being one) also have a sort-of annoying tendency towards self-loathing -- really beating ourselves up over bad plays. And you know how that goes.... It's a downward spiral of Suck once it begins, and oh-so-hard to extract yourself from.

We also have an equally annoying tendency to do very very well in the regular season, and then lose in either the semifinals or the finals of the playoffs. (Yeah, why does a "non-competitive" league have playoffs? I dunno. I would be fine without them, but if we have 'em, I would like to try and win them, y'know). Three seasons in a row we have done just that -- great regular season, and lose in the semis or the finals.

So, this season, playoffs on paper just didn't scream: "Team 1 championship." Not only did we have the precedent of three years in a row of disappointing playoff performances, but we also lost more regular-season matches, and individual games, than we had in four years. We finished in second place, but it was a sloppy season, fraught with non-volleyball complications. Alan and his wife had their first kid together in February. Scott's work schedule made him miss a lot of games. Various kids got sick a lot at one point. Jim was going to miss most of playoffs. I had super-invasive elbow surgery, and thought March 20 was my last game, but, three weeks later (15 days after surgery) decided to give a comeback a shot. And then Team 8 pummeled us twice during the season and I never even knew who was on their team because I missed both games. In fact, a lot of us missed a bunch of regular-season games. We seemed a little unfocused.

It all was adding up to another disappointing playoff run.

But something told me not to be like that.

So we won the first two rounds of the playoffs relatively easily. But then we drew the dreaded Team 8 in the semis, and I think everyone wondered what the deal would be. So, in my role as amateur giver of stupid pre-game speeches, on the drive to the game, I thought of three possibilities to rally the troops. All were intended to "keep it light" but through vastly different methods.

The first idea was a (fairly predictable) faux take on my over-competitiveness, something along the lines of a Patton-esque growl, through gritted teeth, ala Dick Cheney: "Team 1, I ask only two things of you: a total commitment to victory, and a burning desire to feast on the steaming entrails of your vanquished foes. Who's with me? Yum, yum, Team 1."

I nixed it. Too predictable, and maybe too scary even as a joke.

Idea two made me laugh: "As the most wasted talent in rock and roll once sang, 'Make the best out of the bad, just laugh it off. Ha! You didn't have to come here anyway.' Yum, yum?"

I nixed that too. Only the old people like me would get the Rod Stewart reference. The rest were born long after he hit the skids (which was about 1976 if you are keeping score).

So I opted for not terribly funny at all, just sorta honest: "Um, we are better than the other three teams that are left. We have the ability to run away with this, but, the way things usually go, we won't. We will hit bumps in the road, and it's how we handle those bumps that will make the difference. You have to promise to yourself and everyone that you won't get down on yourself or your teammates. I promise to you that at no point during this evening will you be able to mistake me for an angry dictator of a small third-world country. Keep laughing. Keep joking. Have a blast. Shake off the bad stuff, and we win."

I have no idea whether that helped, but we won. We demolished Team 8 in the first game of that semifinal match, and then -- causing me to beam with pride over my teammates' joyful intensity -- we came back from 11-0 down in the second game to win it. We have never, ever overcome that kind of deficit in a playoff game. It was truly inspiring. We giggled our way through it, even at 11-0 down.

And then we won the championship match, and the Robert Wisdom Cup** fairly anti-climactically against a tough, but tired Team 10 that had no subs.

All night long, everyone was awesome. Amanda set us brilliantly, as always, and she and I did our always-annoying/always-funny stupid dances as we waited to switch positions so she could set and I could hit. The Robot was a popular one last night, the Low Robot doubly so. Sung and Scott flew through the air blocking and killing like part of a goddamn circus act. Matt and MJ were solid, stable and awesome, making great plays whenever we needed 'em. Alan was his usual mix of leader, goofball and great player. Devra gets her typical Toughest Woman in the League/Do Not Eff With Her/She *Will* Block You Even If She Is Not Tall award, as well as the Wants to Win Almost As Much As Steve badge of honor (shame?). And Tyler showed up as some sort of Shaolin/Zen warrior trickster, dazzling everyone with blocked shots and perfect, yet rarely high-speed, kills. I believe at one point he levitated through three straight points, returning to earth only to consume some strange pre-mixed cocktail of ginseng, taurine and caffeine that he said, "Shone the light on the *real* truth, Steve. Want some?" (And Tammy and Jim couldn't play, and that's a shame because they missed the party).


We were awesome. And I am so damn proud of my teammates. We were nothing but positive all night, even down 11-0, and, yes, I may have finally learned *that* lesson. There may be some teams that respond well to rousing calls to victory from despotic dictators, but Team 1 is not one of them, and it's much more fun not to act like that, anyway. You guys are amazing, funny, smart and I am proud to be your teammate.

Oh, and I will never ever again go to pose for a "pretending to drink out of the championship trophy" photo without first checking to see if there is actually already beer in the trophy bowl. Wow, that was a tidal wave of malt and hops that cascaded down the front of me. Well played, whoever set that up. 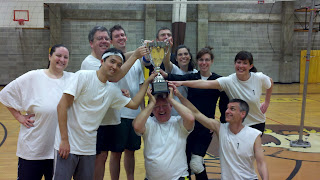 Me and Alan, mugging with the trophy and our victory medals. 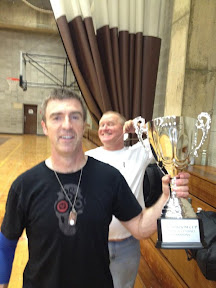 Me, in the most-accurate photo ever taken, soaked in cold, malty goodness, saying, "Duuuuuuude!? There was *beer* in the trophy when you told me to *pretend* to drink from it!?" 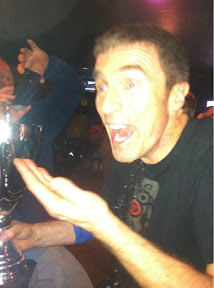 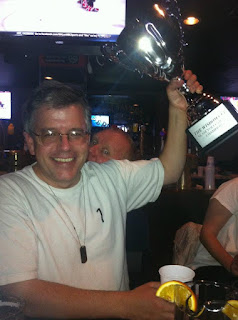 Sung drinks from the cup and it is good. 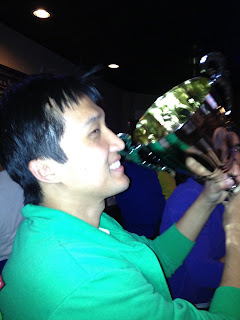 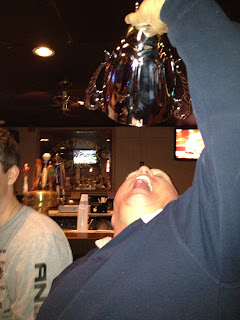 Tyler finds the cup within the cup. 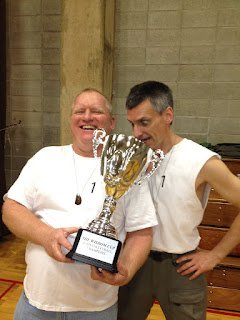 Amanda clutches the spoils of victory. 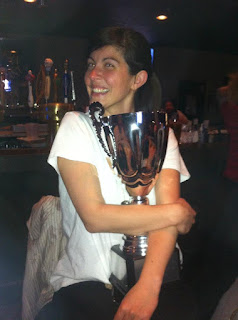 Alan and Amanda smooch the cup. 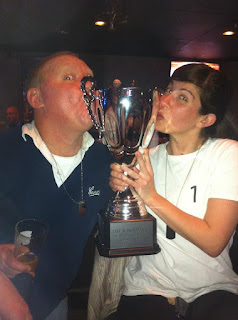 Matt, Alan, Amanda and Scott eschew the wings in favor of playing with the trophy. 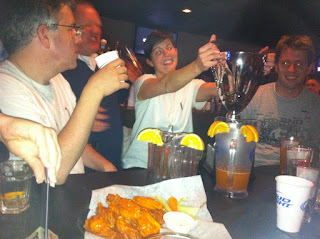 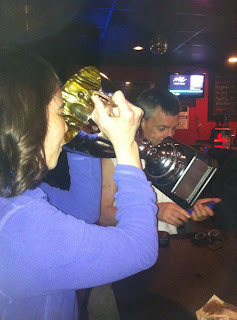 Posted using BlogPress from my iPad
Posted by Steve Kirsch at Wednesday, April 25, 2012