Maybe, just maybe, sometimes some of us are a little out of hand? (Sunday night thoughts and rambles....)

By and large, I don't do a lot of paleo "stunts" or "bio-hacks" (or whatever the going phrase of the day is), but I do dabble in a few of them. You know... eating/drinking excessive amounts of _____ because, you know.... If a little bit of ____ is good for us, then a whole giant effing boatload of it must be the key to general awesomeness, right?

I am beginning to wonder.

I had an interesting conversation today with a regular reader of my Facebook page. He showed me an article that wasn't a hit-piece on paleo by any means. But it was questioning a common breakfast-y trick that he and I both do pretty often. And I don't want to pick on any one stunt, so I am not going to name it, but let's just say that it necessarily involves me consuming a quantity of butter and coconut oil that is just not "normal" in any sense of the word.

And I got to thinking: if all (ok, most) paleo folks who are "in the know" shun exercise-y things like steady-state cardio at overdone durations that most of our ancestors just wouldn't have done, why are sizable numbers of us seemingly overdoing it in certain areas of the food/drink department in ways that said ancestors wouldn't have embraced either?

On one hand, I fully agree with the standard paleo dogma that says that, for instance, the government recommendations/warnings on saturated-fat intake are comically overblown, and probably even dangerously low. But is it possible that some of us are going overly wild in the opposite direction by doing things like adding fat in such quantities to our food on a daily basis that we have surpassed any reasonable levels that our ancestors would have regularly eaten?

I don't know. I really don't. I am not a paleo professional. But I am wondering about it out loud, anyway, because as I consumed a fairly obscene chunk of butter this morning in just a few minutes, there was a thought that consumed me: "Who the hell actually did this every morning in the paleolithic world?"

While I firmly reject the mantra of "moderation in all things" because some "things" (modern wheat and industrial seed oils, for example) are just spectacularly bad for you in any quantity let alone "moderate" ones, could it be that the time-honored path of The Middle Way applies, generally speaking**, to "the good stuff" in our paleo template?

It's just a thought, and I think I am going to follow it to see where it goes for a little while, because The Middle Way always gets my head in the right place, and it works pretty damn well for my exercise regimen too. Could it be that, dietarily speaking, there is a Paleo Middle Way that can be even better for my body than the Paleo Plus Stunts approach that I have been doing? 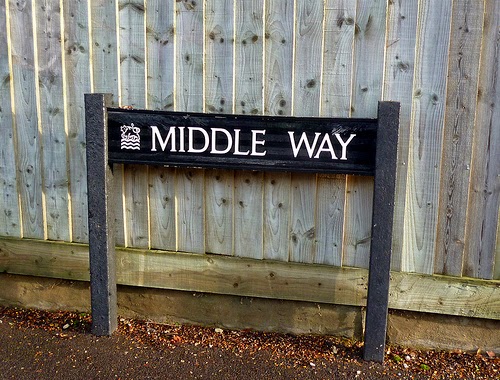 ****************
**Note that I say "generally speaking." There are very good reasons (brain injuries and the like) why more extreme paleo templates are necessary for some folks.