Mostly it struck me as a pretty ridiculous idea.

I got an email about something called #100HappyDays. The idea was to "be happy for 100 days in a row." And to prove your commitment to the venture, the email said that, for 100 straight days, you are supposed to post a reference to a thing that made you happy that day to Facebook, Twitter or both -- preferably with a pic -- with the #100HappyDays hashtag.

Apparently 71% of people fail the challenge because they "run out of time." That stat alone made me want to participate just as a matter of Henry-Rollins-esque personal discipline. "For fuck's sake, people...." I crabbily crabified (yes, I just verbed), "I will defeat you, you 71% of weak-willed individuals who probably would also fail a paleo challenge on Day One crying into a slice of half-eaten pizza. Bring it on, happymeisters!"

So I signed up, citing Facebook, specifically the Paleo Drummer FB page, as my platform of choice,  checking off "curmudgeonly bastard" as "occupation," and providing "defeating the weak-minded" as my "reason for joining the challenge."

Let's say that my participation did not indicate that I was really sold on the actual concept.

I mean, come on now.... happy for 100 days in a row? I took it, at first, to mean 100 consecutive days of answering "Yes" to the question: "Did you have a good day today?" And that seemed preposterous.

Let's be clear: no adult human being has a predominantly good day 100 days in a row, unless you define "good day" as "still alive" and "bad day" as "dead." Even if your name is Happy McHappyson, and you live with your happy family on Happy Street in Happy Valley, you cannot string 100 mostly good days in a row. Something is going to screw that up.

And then I had one of those not-so-happy days, and, somewhere in the midst of competitively refusing to fail the challenge and posting some small tidbit of a scrap of something (a dog walk, I believe) that actually brought me joy on my otherwise craptastic day,  I suddenly "got it":

The #100HappyDays challenge isn't about actually having 100 great days in a row. It's not even about the personal discipline of invoking your inner Rollins to follow through on a commitment for 100 days in a row. It's about finding the joy in life, even on a lousy day.

Especially on a lousy day.

See, my life is pretty great. And sometimes I think that spoils the hell out of me and I let the dumbassery of the modern world drag me down too easily. And this silly, even seemingly inane, little "challenge" has done its bit to change that. Because at some point every day (if nothing else to avoid failure -- because failure will not happen... we're clear at least on that, right?) I have to search the memory banks for something cool that happened that day. Most days, it's easy. Like I said, my life is pretty great. I have a job I like, a family and friends that I love, and, most days, finding something "fun" is like shooting fish in a barrel. Until it isn't. It's on those days that I truly love this goofy little exercise.

It's yet another Zen spin on "perspective." And there may be nothing more important than perspective. 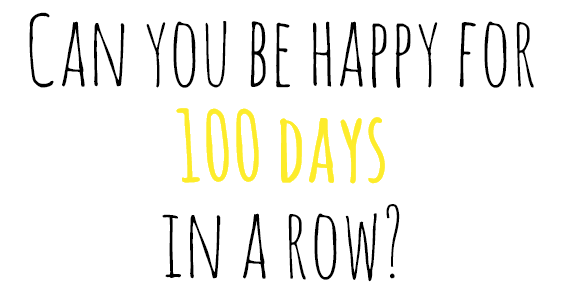