Thoughts from the Costco checkout line 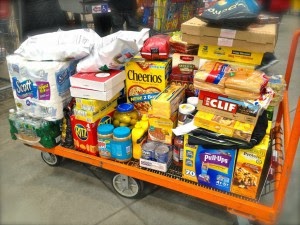 "Dude.... Oh shit, no way. Ack. Dude!"
-- the sound of my brain in the Costco checkout line, where the contents of everyone's carts are on display for all to see.

I love Costco. They have things I need in large, cheap containers, like toiletries, paper products and cases of San Pellegrino (an item that used to fall into the category of "total splurge" that we purchase a lot now now that we don't really ever spend money on alcohol). They also are a decent source for some vegetables, occasionally some meat (although I hear that some of them are more than "decent" in that regard and actually carry grassfed beef…. Sadly, not ours yet), etc.

Costco also sells all the same ultra-processed/grain-and-industrial-oil-filled crap "food" as the supermarket, in much larger containers. So the shopper has to make a lot of responsible choices.

From what I can tell there is an absurd amount of "not" going on.

And the fact that often I am the "weirdo" that gets questions about the contents of his cart from other shoppers is some strange amalgam of horrifying and amusing. It often goes something like this:

Other person (OP): Wow, avocados, sparkling water, spinach! Trying to eat healthy, huh?
Me: Yeah, I don't eat a lot of the food they sell here.
OP: Are you vegetarian?
Me (stifling overreaction): Uh, no. No. Definitely not. I just don't eat processed food. Like, um, anything in a package really.
OP: <blank stare as if I just responded in an obscure Serbian dialect>

Or, truth be told, sometimes I get a positive reaction ("Wow. Good for you!"), but then invariably followed by the qualifier that OP "couldn't possibly" do that because of some reason that ultimately comes down to liking the flavor of all that shit in the large boxes.

What's the point of all this? Oh nothing profound, believe me. … just a further expression of the sobering realization, once again, that eating clean is: (1) something that only you can decide to do, follow through on, etc., and (2) if you do it, you will sometimes be the complete fucking weirdo. You will have to explain yourself more than you want to, and you will have to reorient your brain so all that crap that you used to buy simply is not food to you any longer.

But, god, it's glorious once you "get there." Living well is truly the best reward.

Oh yeah, there's a third realization: Most people aren't going to do this with you, which gets back to realization #1, I suppose. You are driving your own bus down the highway of life. Take charge. Or don't. It really is entirely up to you.

And Costco is there for you either way.


- Posted using BlogPress from my iPad
Posted by Steve Kirsch at Tuesday, January 28, 2014