Guest post! "Floating on [a Salty] Cloud Nine [Days in a Row]" by Skylee Robinson 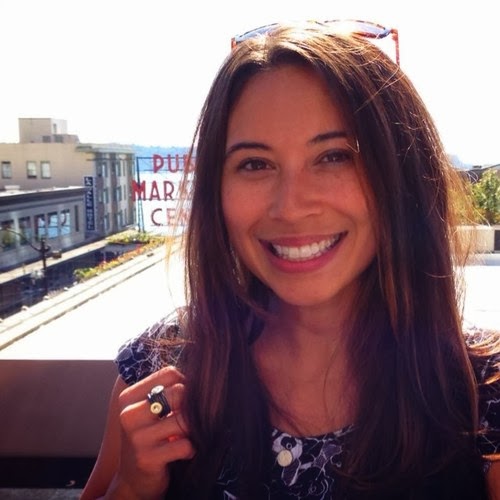 It’s 8:35 a.m. on the first Friday of the New Year and I’m sitting on what is (in my opinion and at this moment) the most comfortable spot on the planet.  I’m on an insanely soft and plush couch with a blue throw pillow under my left arm and my legs up on the long part of the fabric sectional.  As I sit (rather: lie) here, reveling in how comfortable I am, I start chuckling about something so trivial I’m almost too embarrassed to type it out:  I’m laughing at how I know it’s exactly 8:35 a.m. even though I haven’t yet seen a clock.

I think back about my morning, which started with an hour of power vinyasa with my favorite instructor at the spot above the Whole Foods on Westlake.  The relaxing and meditative properties of yoga have been well-discussed and I have no intentions of boring you with them here.  I will say, however, that I recall feeling restless during the morning’s shavasana because I knew today’s true resting pose was meant to exist in water. 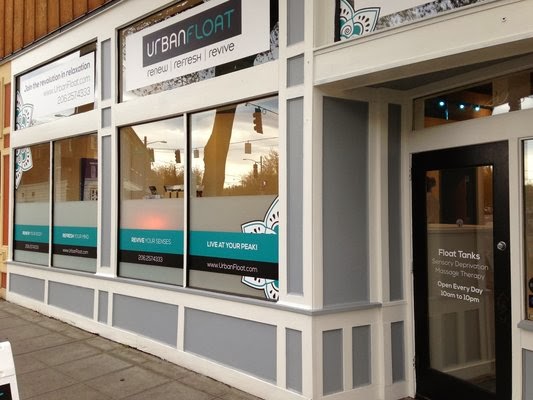 Right after class I took a short drive along Lake Union and across the Fremont Bridge to where I am currently lounging: at Urban Float in a prime location right on Fremont Avenue.  Because I arrived on time for my scheduled 7:30 a.m. session, I walked straight from the front door into my private room, briefly greeting Eve the Receptionist along the way.  This being my ninth consecutive morning session with Urban Float, Eve knew that I knew how to handle the next hour.

Yes, this is my ninth day of floating.  Yes, that’s incredibly indulgent.  No, you do not need to float nine days in a row to feel relaxed (but it doesn’t hurt).

When Urban Float first opened over six months ago, I signed-up for a membership package that provides me with four floats per month.  This allows me to come for a visit for one hour once a week, which is usually more than enough to help me clear my constantly-buzzing head and calm my frenetic mind.  Yet during the Fall work kept me on the road or otherwise away from Fremont.  Then Thanksgiving and Christmas arrived with its flurry of friends and family, shopping, Holiday parties, and cooking.  During the process of picking up torn bits of wrapping paper on Christmas morning I realized that those four monthly floats were still waiting for me like the presents under the tree that had waited until that morning to be opened.  I logged into my online account and booked a Boxing Day appointment…and another appointment the following day.  After tweeting about how wonderful I felt, Steve asked if I would be willing to write about it.  I decided to bridge 2013 with the New Year by continuing daily float sessions into 2014 and write about how I felt then. 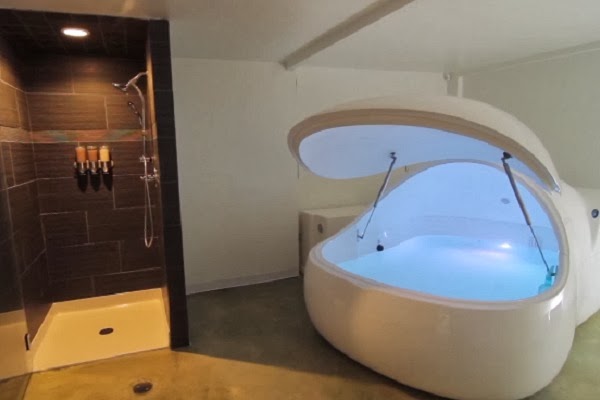 Back in my room, I pulled off my yoga gear and hopped into a lukewarm shower, not once minding the chill from the tepid water as I rinsed the sweat, condensation, and the smell of incense from my hair and body.  Instead of drying off I grabbed a washcloth to completely dry my face, then I tore open a small plastic pouch containing two hunter orange foam ear plugs.  Though the color is loud, the soft cushions are effective at silencing both the room and my thoughts.  I patiently waited as the pliable material reformed itself to the contours of my ear canal, then turned my attention to my best friend for the next fifty-five minutes:  my very own sensory deprivation pod. I have often described to people that a pod is approximately the size of a tanning bed, but in retrospect that is not accurate.  I would instead compare it to the size of a small car (I could even go a step further and compare it to an Isetta since both enable entry via a single hinge, but this tank certainly feels larger than that tiny Italian vehicle).  But like most things in life, it’s what is inside the pod that counts, and inside a sensory deprivation pod is about a foot of special water.  The water is automatically filtered and circulated between visits, but that’s not the best part about the water itself.  The water is heated close to your body temperature; around 95 degrees.  Additionally, inside the water is about 850 pounds of epsom salt, making the density of the water comparable to that of the Dead Sea.  That means that as soon as you are inside the pod and inside the warm, salty solution, your body’s natural buoyancy brings you right to the top of the water.

The first time I floated was nearly a year ago at the Float Shoppe in Portland, Oregon.  Earlier that week I was traveling in Chicago and did a CrossFit session that involved over 100 pull ups, which was dumb as all I had to show for my effort were two pulled lats.  I sought relief from my massage therapist but there was nothing she could do to alleviate the pain in my back and shoulders; simply touching my lats would make me flinch.  I couldn’t sleep either because no matter how comfortable my bed it was always pushing upon the same areas of my body that were already causing me discomfort.  Through either sleep deprivation or sheer desperation, when I found a Groupon to the Float Shoppe while visiting a friend in Portland I decided to give it a try.

Once you close the lid of your pod and turn off the lights it becomes pitch black.  It takes a few seconds for the flashes of the last light you saw to leave your retinas, but once they disappear you experience true darkness.  It is so dark that you will have to make an effort to think about whether your eyes are open or closed.  This darkness, in combination with the body-temperature water and warm humidity of the ambient air, means that you will have no idea where your body ends and the warm water begins.  And you will just lie there in silence, floating on a warm, salty cloud with nothing but your thoughts and the experience to entertain you.

The first time you float you’re initially reluctant to dip your head back into the water for fear of drinking in a gallon of water saltier than the sea.  But even through that first session you trust you won’t drown and you find a way to let go.  That is exactly what happened the first time I floated.  My head dropped back into the water, but my face was never submerged.  My arms naturally positioned themselves in a cactus pose above my waist so I could rest comfortably in my state of weightlessness.  And while lying within that tank and in that water I experienced something so uniquely calming that I fear my words cannot appropriately describe it.  But I will say after finishing my first float session I felt like it was more than my neck and lats that let go.  I felt such peace that lingered with me, and is perhaps still with me today.

And so here I am, 8:35 a.m. on the very first Friday of 2014.  Today’s session was so relaxing that I fell asleep until gentle music pumped into the water, lightly reminding me that my hour in the pod was ending.  After rinsing away the saltwater in a slightly warmer shower, drying my body and wrapping a large white towel around my hair, I am now wearing my favorite pair of sweatpants, smartly paired with a smirk.  Yes, I am still giddy about how I know what time it is.  Does it matter that some time has already passed in the process of me writing this piece?  No, not at all.  Am I aware that exactly one week has actually passed since I was sitting in the lounge at Urban Float that first Friday?  It doesn’t matter.  I suppose that’s the thing about floating, let alone floating nine days in a row:  I feel too damn good to mind the little things. 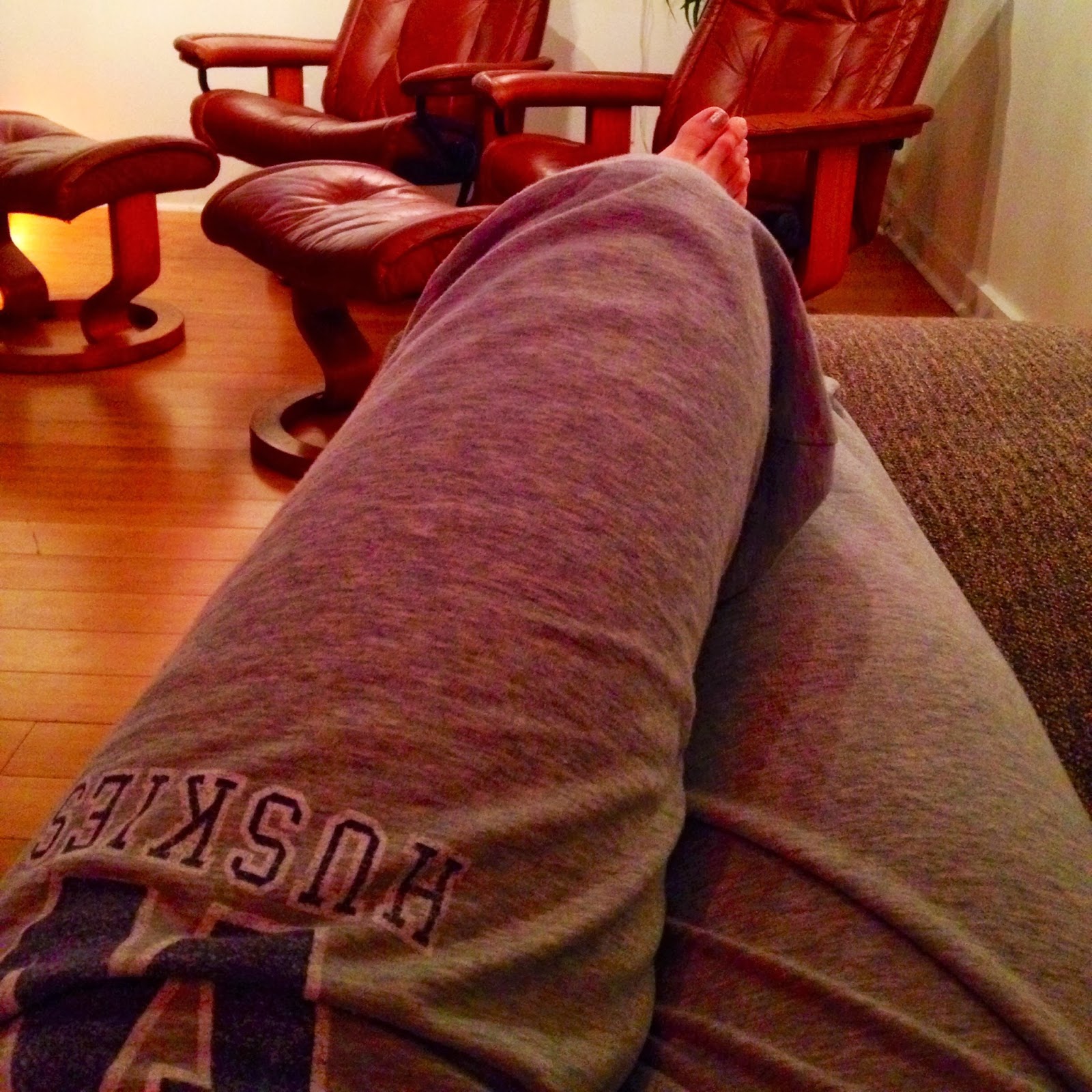