The next step: The Caffeine Experiment 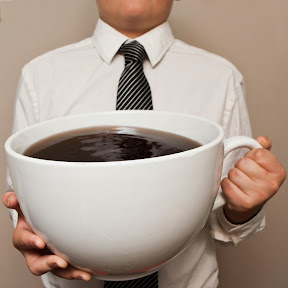 As I have made reference to previously, thanks to probably 1000 little factors, stress has been up lately, and, no surprise, sleep down. So, in addition to all the meditation I have been going on about, I decided, a while back -- maybe a month ago -- to dial down the caffeine intake. One glorious cup of bulletproof coffee (you know, coffee with coconut oil and grassfed butter) each morning.

One cup. Except, I don't always do moderation well, and one cup was, very recently, turning right back into more, with justifications about being extra tired, having had band practice the night before, needing a little BOOM before heading to the gym to lift. Blah blah blah fucking blah. Excuses....

Anyway, a convergence of said stress, lack of sleep, caffeine, whatever else, had me pretty wound up. Resting pulse way up. Blood pressure way up. Sleep interrupted. Weird sugar cravings -- for me, anyway -- that had my usual low intake of dark chocolate and fruit up at new record levels. I don't know if it was truly "adrenal fatigue," but it sure smelled like it.

Whatever it was, it needed a more drastic fix or I was gonna go nutty.

So this week I dialed up the meditation, dialed down the caffeine to the one cup per day level again, got the food back in order (honestly, it wasn't very far off, just a little too much sugar), and.... It worked OK. But sleep still wasn't *entirely* right, and if sleep is not entirely right, then the underlying metabolic engine just isn't going to be firing on all cylinders. BP had dropped some. Pulse had too. But they still weren't normal.

I only have me more trick up my sleeve at the moment: caffeine... See what happens if I dump it entirely.

I have mentioned before that my wife has an autoimmune disorder that has been kept beautifully under control via a strict paleo autoimmune protocol. That includes no caffeine. She hasn't had it for a year, and her sleep has gone from fitful and full of frequent waking to "simulating a corpse." She says the change was almost immediate. Within a few days of ridding herself of caffeine, her sleep got markedly better.

So I'm in, for now anyway. I say "for now anyway" because I don't know what it'll be like if, say, I have to drive a long distance or do something else, maybe work-related, that requires me to be 100% "on" with no possibility of mental fatigue. But, after only 24 hours, I didn't wake today with a screaming headache -- probably because I had tapered down to one cup a day before pulling the plug -- and last night's sleep was, while not perfect, the best I have had in a month.

Most strangely, yesterday moved in slow motion -- in a really good way. One of the signs that I am headed for Stressville is when I have a constant, every-day feeling that there just aren't enough hours in the day and the clock is ticking.... fast! That's been going on for at least a month, and probably more. Yesterday? I can't believe how much I got done and how calmly I moved through the whole day. I kept having the thought that it was about three hours earlier than I would have guessed by what I had accomplished. Hell, I even deadlifted in a 3x3 rep scheme right *at* my PR. I never would have guessed that was possible without caffeine. (Full disclosure: I skipped the metabolic-conditioning part of the workout. Grinding myself into bits with a metcon seems counterproductive at the moment. "Lift heavy. Walk," is my mantra this week).

As I sit here with my mug of decaf, I can't promise that this is a forever change. But early reports from the front indicate that it is, for now, a winning strategy. I'll keep you updated.