Raynaud's update, aka answering the mailbag.

Over a year ago, I posted about how paleo/primal eating had nearly completely ridded me of longstanding Raynaud's symptoms. You know: it's a little (or a lot) cold out and suddenly your extremities, or the tips of them, are numb, tingling, maybe even white and frosty (I never had the white/frosty stuff going on, but I know people who do). By and large, it's a sign of some degree of insulin mismanagement, and what's the best way I know to get that under control? Paleo.

So, just recently, a fellow (or lass) named "Anonymous" decided, in a comment, to ask me for an "update" post on Raynaud's.

It's that simple. The only time I still get minor Raynaud's is if I eat something that had me spiking insulin unusually high or often. The following are sometimes culprits in that regard: booze, protein powder (yeah, sorry), anything with added sugar that I shouldn't be eating anyway, a whole metric shit ton of fruit. Stuff like that. The stricter I stay to paleo, and the more I pay attention to avoiding taking my pancreas on a Nantucket Sleigh Ride, the less often I get symptoms -- ranging from not ever, when I am right on the money with clean eating, good sleep and low stress, to here and there to greater or lesser degrees depending on the extent of my departure from The Way of the Wolf (Wolfe?).

And, for no reason at all, here is a picture of a chorizo apparently wearing fishnets. 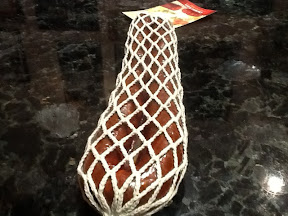 - Posted using BlogPress from my iPad
Posted by Steve Kirsch at Monday, January 07, 2013