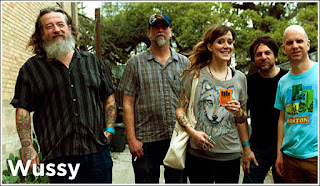 To lay my cards on the table at the outset, let's be clear: I'm not even remotely objective about the shimmering, droning, jangling, harmony-filled roar of the Cincinnati indie-rock band Wussy. I love them. On album. Live. Always. They do not have a single song on their six albums that I do not like and there are, in fact, only a handful that I don't flat-out love. I've rattled on and on about all of that, through the years of this blog. If you were to click on this link, you'd run headlong into a complete collection of all the fannish gushing I've done about them in the past.

That's my bias, in all its glory, and I stand by every fucking word.

(And, really, I am a jaded SOB. I think the number of truly great bands in 2016 is a mighty short list).

But the new Wussy album? It's better than all that.

And the show I saw them do last night? It left that new record in the dust.

Forever Sounds is the Wussy album that the rock critics are going to peg as the one where the band's live sound completely broke through to the studio. (Check Robert Christgau's upcoming 2020 release of "The Best Albums of the '10s" if you don't believe me). See, at a live show, especially since John Erhardt joined the band on a third guitar -- electric or steel depending on the song -- this band's studio subtleties get all intermingled into the roar of a jet engine. Their dynamics have dynamics. Drummer Joe Klug and bass player Mark Messerly hold down the bottom end like the bastard love child of the night Danko/Helm jammed with Peter Hook and Janet Weiss, while the three-guitar army weaves circles around each other. Glorious, kerranging, twisting and turning circles. Atop all that magnificence are soaring harmonies and lead vocals from Chuck Cleaver and Lisa Walker that are so simultaneously distinctive and awe-inspiring that, well, I lose control of my metaphors and resort to writing things like: all that great stuff that makes this band so stunning at a live show? This new album is buried in it. 'Nuff said about that. It's just about perfect. Buy it.

But when I took a ride down to Baltimore yesterday to see the band in a house concert, even though I was already over 24 hours into full immersion with Forever Sounds, and loving every second of it, I had little idea of what I was about to witness.

Let's take a moment to dispel the notion of the house concert as some sort of boring Kumbaya singalong session with musicians armed with nothing more threatening than an acoustic guitar and maybe a harmonica. There's certainly a time and a place for acoustic guitars and harmonicas. (Side One of this would be one of those). But this show was full-on electric.

"We may be a little loud tonight," Chuck said, with a smirk. "The neighbors are gonna shut us down." "I think most of them are in here!" Lisa corrected him. There were 50 of us crammed into the Special Secret Posh Neighborhood Location, and I think a not-insignificant number of the 50 fit that neighborly description. And then Wussy were off to the races....

The ensuing 90 minutes were glorious. It was a perfect night, even though I believe the total song count from the band's first three albums was exactly one. They hit the new album hard, and it hit back, like Muhammad Ali -- no, more like Ken Norton beating Muhammad Ali. The windows of the SSPNL shook hard during the hookline of "Sidewalk Sale," and the stops on "She's Killed Hundreds" sucked all the air out of the room right before the band slammed back in each time to restore our collective ability to breathe. They were on, way fucking on. If I had to pick one standout highlight from all the perfection of the live takes of the new songs, I'd say that somehow -- and I have no idea how this can be -- Lisa's vocals on "Donny's Death Scene" were even better than the on the studio version. But picking that one out serves only to minimize how great it all was. They are a band on a mission, and they surpassed all of the absurdly high hopes I had for them last night. Everything that they played from the new album -- and they played all but two songs -- was incendiary. But they also had that slapdash, adorable between-song banter and bickering between band members that always manages to make them more freaking endearing than their music already makes them. (A quick, nerdish aside: you just haven't seen an onstage look until you see that one that Lisa gives Mark when she has determined that he's gone "just too fucking far, dude," at the microphone between songs. I think I counted four of them during this show alone).

2014's Attica album was drawn on for a number of songs as well -- yes, of course they did "Teenage Wasteland," and of course it was the same mix of gorgeous, powerful and uplifting that every Who anthem that it evokes ever was. And "Pizza King," from Strawberry -- which I would have sworn was the best album they'd ever do, that is until Forever Sounds just came out and blew away that silly notion -- was another highlight, one which somehow keeps getting better on every tour.

But the secret weapon of a house concert is that it's likely to get weird and wonderful. Apparently the secret weapon of a Wussy house concert is that it gets really fucking weird and wonderful. On the weird end of things, there was Chuck's quick take on the B-side "Folk Night at Fucky's" and the band's amped-up version of a serious obscurity: the Twinkeyz' "Aliens in Our Midst."

And the wonderful? Well, it was all wonderful, but the highlight of highlights, the thing that made me say, "Holy shit" to a friend just as he said, "Wow,"  and we both went fucking bug-eyed with awe, was "Ceremony."

For me, "Ceremony" has the stature of, say, "Baba O'Reilly" on a hot date with "Sister Ray" and "Sympathy for the Devil." Iconic and anthemic don't begin to cut it as a description. Somewhere a few years ago, I heard a recording of Wussy sort of screwing around with bits of the song. But last night's version was not, in the slightest, screwing around. They nailed it, completely -- with Lisa and Chuck wailing away on the vocals, Mark Peter-Hook-ing the hell out of the bass, the guitars setting each other on fire and Joe perfectly harnessing the controlled dynamics of the drum part. My metaphors are again shot to hell, but really, it was one of those "Notch this one in your brain because it's top ten of all time, motherfucker" moments.

Really. Top ten of all time.

If you read this as "Everything was perfect, but Ceremony was more perfect than perfect," I will have successfully conveyed my thesis.

And then, when it was encore time, Lisa came out on her own for what surely must be a rarity: a solo, soaring "Majestic 12." Then the band came back out and reached way back to the debut album for a fierce "Airborne." And it was all over.

Afterwards, I shot the shit with Mark about how I first saw the band back in like 2005 at Twangfest, am going to see them again at the same festival this year, and other nerdish fanboy shit (shocking, I know), and I yapped John's ear off about the majesty of Scrawl, the success of the recent Ass Ponys reunion, and the perils of rock and roll parenting. (Someday I am going to wax seriously poetic about Scrawl, but this post is long enough already....)

If it's not clear, I had a religious experience of sorts last night seeing this band. If it's also not clear, you cannot go wrong with Wussy. Buy their shit. See their shows. Make them famous. I'll be slightly sad when they headline Wembley Stadium and forget about us little people, but I wouldn't be sad for long. They deserve to be treated like the best damn band in the world.

Because they're the best damn band in the world.