She makes a really good point; don't get too clever with paleo before you can handle it 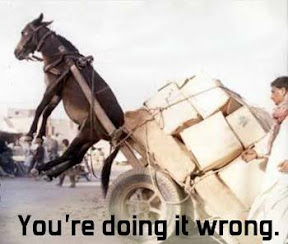 I generally try not to use this blog as a platform to simply repost something that someone else wrote, and chime in just with: "What (s)he said!" But there are occasional exceptions.

Amy Kubal, one of the talented, smart people over at Robb Wolf's site made a really good point recently, and, because Amy's piece addresses subjects that I have written recently about, skipping breakfast and carb backloading, I thought I would, for a moment, play Flavor Flav to her Chuck D.

(By the way, I found Amy's article via this edition of The Paleo Rodeo at Diana Hsieh's wonderful site, Modern Paleo: the blog. You might want to go there too and find paleo articles and sites that you might not otherwise have explored or known about.)

See, sometimes, we paleo/primal folks who have been doing this thing for a little while get in pretty deep. And that's cool. If you have dialed in your paleo-osity to a degree that it's all humming along really well, and there's just this little tweak that you want to play with, then, yeah, *that* is when you take a shot at things like delayed-breakfast strategies fueled by bulletproof coffee, or carb backloading to make your already pretty bodacious self just a little more badass.

But, on the other hand, if you are a newbie to paleo, as Amy points out, don't get distracted by my (and others') hyperspecific nonsense when it comes to specialty tweaks to the paleo routine. Lock it all down with the basics, for a good long while (she suggests at least a year, and that sounds right to me), and get your inner metabolic and digestive engine running at an efficiency and a beauty that you have never seen before. *Then*, if it's all working great, feel free to tweak away, dude.

So, anyway, I wholeheartedly say, "What she said!" to Amy Kubal's article. It is full of great points -- well, at least until she endorsed a Van Hagar song. I can't get behind that at all.... If I am going to leave my obscure/punk/indie music world for some Van Halen (and we all need "Panama" every now and then; let's admit that much) I want my VH to be as over the top and ridiculous as possible, and you can *only* get that with David Lee Roth.

"I used to jog, but the ice cubes kept falling out of my glass."
--David Lee Roth