How to start eating paleo 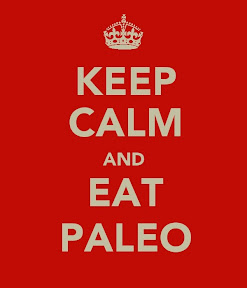 Maybe you just joined a CrossFit gym and some trainers there started asking you what/how you eat. Or maybe you have a friend who has seen amazing results -- triglycerides plunging, proper insulin management restored, body fat reduced and weight lost -- by eating only real food. Or maybe you just read the near-daily barrage of articles that seem to mention it, amidst some crap about cavemen. But, one way or another, you are -- to quote George Clinton -- "standing on the verge of getting it on," with "it" being (dramatic capital letters, and drum roll please...) THE PALEO DIET.

So how are you going to make this work?

Something to consider: any substantial dietary change can be tough. Try, for instance, dumping a multi-cup caffeine habit cold turkey. Owie. Double owie. You don't want to do that (think: crushing headaches of doom, like your grandma would feel in the front row of a Slayer concert). You would want to make that change *gradually*.

I think that for all but the most hardcore tough guys (and gals), the same holds true of starting paleo. No, I don't want to turn this into a yearlong project. It's your life and health that are at stake, so I want to see you make progress quickly, but I also want to see you *succeed*. And a successful transition from pre-packaged crapola into paleo can be a little jarring to the average person's psyche. You *could* dive right in and attempt to follow *all* the rules of paleo right off the bat, and if you can do that, have at it, Super(wo)man. But most people aren't quite that tough.

So what's the plan to make this transition a little smoother? I have two basic steps for you.

(Let me digress for just a second to say that the intent of this article is not to teach you what paleo is. I assume you know that already. If you don't, go here or here to get the basics from people much smarter than me about all this.)

First step: stop thinking about this change upon which you about to embark as a "diet." Diets are dumb. Diets are double-dumb. They are intentionally designed to put your system through the wringer for a short period of time, often achieving some weight-loss or body-comp results, and then (big effing surprise) losing all those good results as soon as the "diet" is completed. Is anyone shocked when people lose weight doing some sort of 500-cal-per-day minimalist diet? There are North Korean prisons that will do that for you too, but neither Kim Jong-un nor the people who put together those kinds of diet plans are worried about the sustainability of that "diet" over the long run. They are both trying to starve you.

But you *are* concerned about sustainability, or you should be. In fact, sustaining a "way of eating" -- note: not a "diet" -- is the most important goal.

If you are embarking on a paleo lifestyle, it isn't intended to be a "dip your toe in the water to see how it feels" change. Sure, I suppose it's possible that you won't love all the delicious food and the wonderful results you get, and decide to go back to Twinkies, Fritos, beer -- oh, and belly fat and manboobs too -- but otherwise this is it, dude. You are either on the bus or off it, and, right now, you are trying to figure how how to get on, and, even more importantly, how to stay on.

So stop calling it a "diet."

Second step ( and this is the big one): stop eating grains. All grains.

If you are not willing to do this, go back to the Twinkies/Fritos/beer routine and embrace your burgeoning (or present) manboobs and/or belly fat. Paleo isn't going to happen for you.

I didn't say this would be "easy." I am just trying to make it "easier" than a full-on head-first dive.

So, yeah, ultimately your goal is to comply with *all* the rules of paleo. No grains, legumes, dairy, etc. but to start: just kill the grains.

I repeat: to start, just kill the grains.

Trust me... As a guy who ate two sandwiches for lunch, plus what can only be described as a "metric shit ton" of pasta and pizza, for about 40 years of his life, this one thing is a giant -- make that "super-enormo-giant" -- step.

In fact, beyond easing you into paleo, just focusing on eliminating grains (*all* grains!) has another benefit: it teaches you that you are one tough, righteous mofo, because, really, if you can eliminate all grains successfully, you can likely (but eventually, not right now) ditch all the other bad stuff with ease. "God, I really miss my canola oil," said no paleo person ever. It's the elimination of grain that is going to be the Big Step for most people on this journey.

So, isolate that Big Step. Don't (unless you are the Henry Rollins of food) try to get all badass and dive into paleo in one dramatic move. Ditch the grains, and *then* do the rest.

"What's a grain?" you ask. Easy. Here is a simple list of the grainy stuff you are no longer consuming in a strict paleo lifestyle when you are trying to accomplish all the great changes of that lifestyle:

Beer
Bread
Tortillas
Pizza
Chips, even "multigrain healthy" chips/pretzels/cookies/etc.
Rice (although, and I shouldn't tell you this now, you *may* very well ultimately be able to eat white rice a while from now once your body comp is where you want it to be).
Pasta
Cereal

Considering that I just named the eight essential food groups of a standard American diet (SAD), you may finally understand that, while I am trying to help you out by suggesting you take this one step first, this is a really huge step.

That's all I have for you. Again, you can try to go full-on paleo in one shot. It is possible to do, but I think your chances of actually sustaining this way of eating over the long haul are so much better if you ditch the grains first. It is the biggest step. It is also the one that leads to the biggest results. Then you can start doing things like this and this.

Good luck. Some pretty amazing changes are around the corner if you do this right.