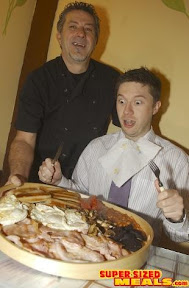 "Breakfast is the only meal of the day that I tend to view with the same kind of traditionalized reverence that most people associate with lunch and dinner. I like to eat breakfast alone, and almost never before noon; anybody with a terminally jangled lifestyle needs at least one psychic anchor every twenty-four hours, and mine is breakfast. In Hong Kong, Dallas or at home — and regardless of whether or not I have been to bed — breakfast is a personal ritual that can only be properly observed alone, and in a spirit of genuine excess. The food factor should always be massive: four Bloody Marys, two grapefruits, a pot of coffee, Rangoon crepes, a half-pound of either sausage, bacon, or corned beef hash with diced chiles, a Spanish omelette or eggs Benedict, a quart of milk, a chopped lemon for random seasoning, and something like a slice of Key lime pie, two margaritas, and six lines of the best cocaine for dessert... Right, and there should also be two or three newspapers, all mail and messages, a telephone, a notebook for planning the next twenty-four hours and at least one source of good music… All of which should be dealt with outside, in the warmth of a hot sun, and preferably stone naked."

If you are an aficionado of as many paleo/primal blogs as I am, you will quickly find that if you try to follow *every* piece of advice you are given on those sites, you will lose your mind -- all in a very paleo/primal way, of course, but you will go completely batshit crazy with contradictions and competing advice.

No, it's not that one paleo site is going to tell you to forego grains while the other has you at Pizza Hut five nights a week. They all agree on the *basics*, but it's at the fringes where you will learn that you have to collect the advice, sort through it and -- get this -- figure it out yourself, like a grownup.

And that's cool for a number of reasons. First, it makes you put on your big boy/girl pants and take responsibility for your own health. Secondly, it gets you out of the mindset of the average processed-carb-scarfing automatons on the street who just want someone else to tell them what to do with every aspect of their lives, including what to eat. You know... you get to *think*. And thirdly, it fits in well with a simple fact: we are all a little different from one another, and what works great for one person may not be the perfect solution for the next guy (or gal) in line.

Again, the basics of primal/paleo work for almost everyone, but at the edges, there is a lot of room for experimentation toward the ultimate goal of feeling and performing at a level of awesome you never knew you had in you.

And if you aren't trying to be awesome, as a friend of mine says, "What the fuck are you doing with your life anyway?"

Which brings us to breakfast.

I love breakfast. I love breakfast as much as Dr. Thompson, just with some, er, slightly different ingredients. So when I started reading recently on sites like the Bulletproof Executive and Dangerously Hardcore (intentionally provocative) phrases like, "Breakfast sucks!" well, let's just say that my initial reaction involved a two-word phrase -- the second word of which was either "you" or "off," depending on whether I was feeling more American or British in my usage.

But... one of the things you learn, after you realize that what you like is not always the same as what is really good for you, is that sometimes you need to open your mind and take a second look at what may, at one time, have seemed unimaginable.

Which brings us, again, to breakfast.

Here's the deal. It's not that I am not consuming *anything*. I have one cup of coffee (the vaunted caffeine experiment was cool, but, after three weeks I decided I really really like that one cup... Just one). That cup has a bunch of coconut oil and (unsalted!) grassfed butter (Kerrygold or Smjor) in it. The caffeine makes everything perky and the fat from the coconut oil and butter -- besides upping the deliciousness factor to eleven on a scale of one to ten -- keeps me full. I also seem to be much smarter and more creative (if I do say so myself) during those "fasted" hours. There was a day last week where I woke up at 5 or so, had that cup of fatty coffee and hit the computer for an epic morning of heavy-duty thought/creativity related to my day job (about which, you may recall, we never ever speak). My god, the big thoughts were bigger than usual. I was, for a brief time, The Most Clever Man on Earth.

Seriously, I got shit done. (And that's all you're gonna hear about *that*).

Really. If you told me a year ago that I could have *survived* that long without breakfast, let alone *thrived* that way, well, we would have been back to that two-word phrase, maybe both the British *and* American versions.

And it hasn't been the same every day. Sometimes, I got hungry sooner than that, so, y'know what? I ate. It's all about listening to your body. Just as every person is a little different, every day is too.

But the bottom line is that I like this no-breakfast thing.

It also, getting away from the "how I feel" part of the equation to more biochemical angles, has an added bonus: you burn fat like a mofo (not actually a biochemistry term).

See, as I understand it, everyone (except a diabetic) wakes up, after a good night's sleep, in a ketogenic state. In ketosis, your body and brain are using fat, as opposed to glucose, as the primary fuel source. You are burning fat.

If you want to continue that state of awesomeness that is already there when you first wake up -- and really, how many things in life are that free? -- a cup of coffee with good fat, particularly the medium-chain triglycerides (MCT) in the coconut oil, does the job for much, or all, of the morning. Then, eventually, when you eat a solid paleo meal, you go back to your normal state, until bedtime and it starts all over again.

I love it. I also don't do it *every* day. I do it most days, but if I have to be somewhere other than home or the office, i.e., a place where I might not have food when the Hunger Dragon finally comes knocking, I eat breakfast like a normal person -- but a normal paleo person, mind you, meaning it is pretty damn (good)fat-heavy anyway.

And, unsurprisingly, I guess, I don't feel as witty, clever, creative, awesome, etc, on the breakfast days as I do on the delayed/no-breakfast days.

So there you have it. Like I said, I love it. But I also make no claim that this will work for *you*. Perhaps I am a mutant; perhaps not. Go figure it all out for yourself, like a big boy or girl.