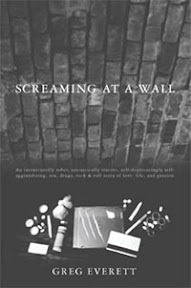 If you stop by this page with any regularity, you most likely are here from some sort of paleo/exercise/lifestyle perspective that may make the name Greg Everett a familiar one to you. Yup, he is the weightlifting coach/author who runs Catalyst Athletics and plays funny/sarcastic/grammar-and-usage-aware (to say nothing of smart/informed and knowing when to stay in the background) sidekick to Robb Wolf on Robb's weekly Paleo Solution podcast.

But who knew what he was all about before all that? Not me. Screaming at a Wall is Everett's "fictionalized autobiography" of his teens and early twenties.

Published ten years ago -- self-published under Everett's then-barely-scraping-by Grundle Ink Publications -- the book was long out of print until the January 2013 reissue, which is, quite honestly, one of the quietest reissues ever. (Christ, I can't even find a good online photo of the reissue cover, so the one you see above is of the 2003 version).

But never mind the word "quiet" in any other application to this book. It seethes with a Rollins-esque bitterness, but filtered, unlike Henry Rollins' books, through both a fairly appalling level of drug use and, strange as it sounds, a burning desire, somewhere underneath all the sarcasm, for a lot more human contact and love. Yeah, the author will tell you, for most of the book, that he is, first, a drug-using asshole who doesn't give a fuck about the feelings of people -- particularly the women with whom he has a neverending series of something just a little more than hookups -- and, second, once he gets (mostly) clean, a non-using asshole who hates everything about the drug and drink scene that he has ditched. Like Rollins, he is a fucked-up loner, but, even early on, there's a yearning there for love and respect amidst the cocaine/LSD/weed/booze/glue (glue?! Fucking glue.... good lord) binges. And, as he gets cleaner, he simultaneously cares more and more about real relationships, and opens himself up a little more with each of those relationships to getting hurt. He also starts to pursue his publishing dream.

My bottom line: I loved it. First of all, I am a big fan of Everett's sarcastic sense of humor on the Paleo Solution podcasts, and that shines through here, in a book written years before that podcast ever got started. The same wonderful funny-as-hell intolerance of folks who write into the podcast with questions written in third-grade-ese is present in Everett's disgust with the no-future losers he seems surrounded by in high school and then college (his anti-hippie rants against his fellow Prescott College students are particularly funny). Secondly, I love Henry Rollins' writing, and while Everett is no Rollins clone, his writing is clearly informed by Rollins, both stylistically and attitude-wise. He mixes his seething and his self-deprecation well. Thirdly, his punk-rock frame of reference -- Rollins Band, Minor Threat, etc. -- mirrors my own. Finally, let's just say that I can relate -- not precisely, mind you. I never took a boatload of drugs, but an unhealthy relationship with booze in my younger years and a sometimes-appallingly-casual attitude toward the feelings of a number of women in my life at certain points, and well.... A lot of this hit home -- particularly regarding a notion that is pervasive throughout the entire book: I am running out of time.

And, mind you, I found this probably more uplifting than it was ever intended to be when written. Realizing what the author survived back then to still get where we can all see he is now? Pretty inspirational, even if it's mostly a 20/20 hindsight, ten-years-later sort of inspiration.

This is a great book. It has nothing -- nothing -- to do with weightlifting, paleo, exercise or any of that stuff you otherwise associate with Greg Everett. But it's a "solution" of its own to some gnarly real-world issues of addiction, loneliness and self-worth. Get it.


Posted using BlogPress from my iPad
Posted by Steve Kirsch at Saturday, February 09, 2013