In light of the fact that I've been running around to Mekons shows, it's been a couple of days since I meditated. I woke up on this humid Sunday morning with a swirling miasma in my brain of ideas for things to do today. But I didn't have a plan.

By and large, I need a plan.

I also was feeling a little restless, so my standard seated meditation wasn't going to cut it today. I required a little locomotion. So I hit the pavement for a walk, sans phone, sans music, sans headphones. Just me and five miles of country roads.

My head cleared almost immediately. Ideas fell into place for what I really could accomplish today versus what was likely just too damn much.

The corners and crevices of my brain opened up so much that I noticed things that I might otherwise zoom past, like a family of Canada geese crossing a cedar-stained stream in the shadows cast by trees being beaten down by a fat old summer sun: 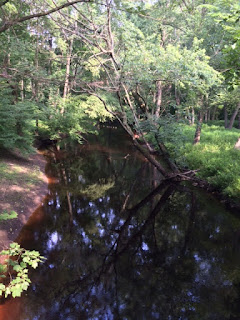 (See 'em waaaaay back in there?)

And all around me, people were going in circles.

That's not a metaphor. Or not entirely a metaphor, anyway. Really. I kept seeing the same cars over and over.

We live in a pretty rural area. Our "block" is over two miles around, with no connecting streets in the middle, and most of the roads around here are like that -- big old country two-lanes with high-ish speed limits. We live on one of the more "main" of those roads, a north-south highway that has a fair amount of traffic. During the portion of my walks that are on that road, I tend to stay way over off the shoulder. It's not worth the risk of getting hit.

This weekend's been a different story, though. Just a short way up from our house, the main drag is closed for road construction.

The highway department has been warning drivers about this for weeks with giant flashing solar-powered signs in both directions telling us all that the road was going to be "CLOSED" all weekend. And, now that the weekend has arrived, farther down the road there are "Road Closed Ahead" signs warning: "Local Traffic Only."

People apparently don't like to hear that sort of thing. Over and over and over today, I'd watch folks slow down, ponder the "local only" sign, and, apparently thinking, "Fuck it. That doesn't apply to me," they would go around it. Moments later, I'd see them coming in the other direction, post-U-turn, looking pissed-off, confused, appearing as if it'd all be different <angry get-off-my-lawn old-guy voice> "IF ONLY WE'D HAD A LITTLE WARNING!"

They had a lot of warning, both long-term and short-term.

So my walk was full of metaphorical splendor of many types.

Yeah, my own head cleared out and stacked the tasks of the day into a neat pile, ready for attack. But I also got to observe the madness of the modern non-mindful world in full bloom. I shit you not: people were circling back and forth and around and around, often more than once -- refusing to believe that if they had just made that damn right turn back at the "detour" sign, everything would be peachy. Nope, they were going to pound a square peg into a round hole. They were going to make the impossible happen. They were going to eff the ineffable... well, until they just plain couldn't anyway. As far as I know, no one tried to crash the barrier that was manned by law enforcement.

Slow down. Take a look. Breathe. Think. Your brain loves that shit.

Now it's time to get some things done.... 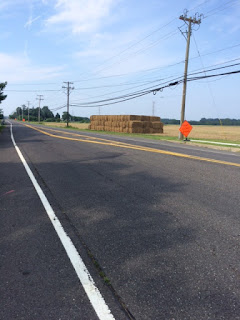 (The typical scene on this road involves a whole lot
of cars and no "road closed" sign. This is more fun,
hay bales and all).