Some people suck, so I took this photo.

My dogs seriously hate her.

She's a 60s-ish/maybe-older woman who walks around our rural "neighborhood" -- if you can call it that; it's just occasionally intersecting roads connecting old farm fields -- and she is always (always!) on the phone, talking REALLY LOUDLY.

In a nasally Long Island accent.

It's like Fran Drescher's rude cousin is loose in Mayberry.

"AND THEN I SAYS TO HIIIIIM: "NO! YOU GO FUCK YOURSELF," and similar of her shouted telephonic niceties are what generally set the dogs off.

So when I happen to be out for a walk and I occasionally run into her, I sort of begrudgingly wave hi. The little that I know about her makes me not like her, but I try just the wave. There's no use actually talking to her. She's on the phone. Always. She never returns the greeting, by the way.

But there was a change in the routine just yesterday.  It was going to be brutally hot and humid, so I went out for a really early a.m. walk. For the first time ever, I saw her before I heard her. She actually wasn't talking on the phone.

We were walking toward each other on a quiet empty road. As we got within 25 feet or so, I looked right at her and said, "Good morning," and she said nothing. There was no acknowledgment from her that I'd spoken. "Whatever," I thought and kept moving. Within seconds, she then popped headphones out of her ears. She still said nothing. Then, just after we passed each other, she laughed self-consciously and loudly exclaimed, "HA! THAT'S FUNNY. USUALLY WHEN PEOPLE PASS EACH OTHER WALKING THEY SAY HELLO. I.... GUESS.... NOT!"

Ten years ago, maybe even five, I would have read her the fucking Riot Act. I would have let loose with a verbal barrage that would have told her: (1) I said hi and she ignored me, like she always does, (2) she would know that if she weren't so self-absorbed, and (3) by the way, could you possibly shut the fuck up on your daily walks because we can all hear you inside our houses, and even my dogs hate you."

Instead, I didn't say a word. I ignored her, kept walking and stopped at the next bridge and took a photo of a bucolic stream. 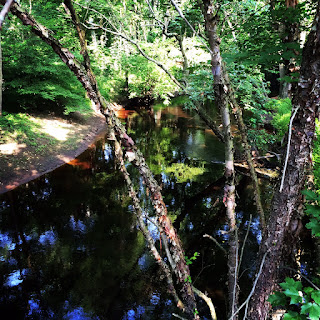 Life is short. It's probably not worth bothering. Move on.
Posted by Steve Kirsch at Saturday, June 13, 2015