I'm not one for regret. I don't spend a lot of time thinking, "If only I had...." It's counterproductive. But let's indulge in one tiny detour of regret for a brief moment:

I am a complete fucking idiot for never having seen Sleater-Kinney prior to last night.

In 1996, I bought Call the Doctor. I loved it. It was post-riot-grrrl angular feminist punk that reminded me of the Gang of Four mixed with the Runaways. I loved it so damn much that when Option magazine (R.I.P.) asked readers to submit their Top Five lists for the year, CTD was on mine and my list got published in the January 1997 issue (which, if you happen to have that lying around, I'd love to get a photo of that readers'-review page, but I digress. Hit me up).

And the next year, Dig Me Out floated my boat pretty damn well too.

But I didn't go to see Sleater-Kinney back then. And I mostly have no idea why. I was distracted? I have no clue.

Worse, I didn't really pay attention when The Hot Rock, All Hands on the Bad One, and One Beat were released to critical raves. "I'll get back to them," I must have thought.

Which brings us to The Woods. Holy balls, Batman. The Woods. By the time a simple thought crossed my mind to maybe check in on the women of SK to see what they'd been up to, they had released The Woods in '05, announced their impending split, done a final tour, engaged in said breakup and, oh, quite a few more years had passed. It was 2010 (maybe even 2011) when I finally bought my copy of The Woods. Let's go back to that moment and tap into Steve's brain on The Woods:

[Song 1 ("The Fox") plays]. Brain says: "I like it. Sounds like what I remember SK can do. Corin is really wailing. Nice"

[The rest of record plays. Steve's brain nearly explodes with that joy you get when an album just means the whole freaking world to you]. "Ohhhhhhhhhh wow. Somewhere along the line, they became a proto-feminist punk version of the Who live at Leeds, and.... I'm an idiot for missing all of this."

The whole damn album just slayed me. While I was doing something else, Sleater-Kinney had become a force of nature, a thundering beast of a cross between their old punk days and a Big Rock Band that had it all.... urgency, tension, guitar tones that tore my head off, and a drummer -- Janet Weiss -- who somehow perfectly balanced her attack right in the middle of an axis that invoked both the precision of George Hurley and the "I'm driving this boat right off the cliff in a glorious thundering cascade of awesome" approach of Keith Moon. She played with a strength and aggression on The Woods that blew me away. And the band broke up before I had noticed what they had become.

Regret. It was present in droves. I could have opened a store called Regrets 'R' Us.

So yup, timing is everything in life. Post-breakup.... that's when I, in the role of Genius Boy, got mightily obsessed with this band. I checked out live videos of what I had missed. I bought those three albums between Dig Me Out and The Woods that I had skipped. I was a major fanboy.

My highest priority as a music fan became, and remained, swearing to see Sleater-Kinney if they ever got back together.

In the meantime, when Carrie and Janet played Philly with Wild Flag, I saw them. They were great (twice!). I loved Wild Flag, but, as I said to a friend last night as the final chords of "Dig Me Out" rang out and Sleater-Kinney said goodbye to Philadelphia after their first show here in nine years, "Wild Flag were amazing, but that was something way past amazing."

Yeah, there's a concert review in here. It starts now.

Last night, at Union Transfer in Philadelphia, from the opening notes of "Price Tag" -- the lead track of SK's brilliant reunion 2015 album No Cities to Love -- the band was on fire. The Gang of Four analogies fit. The Who? Yup. Them too. Hell, SK even worked a Stones-y swagger straight out of Sticky Fingers into "Sympathy." They are fully and completely at the top of their game -- guitars slashing and burning and running circles over, under and around each other, vocals wailing and snarling, and drums? Oh those drums. I'm a drummer. Little in my life makes me as happy as seeing a fellow drummer just owning the freaking drum kit, quarterbacking the band, steering the ship, driving the truck in complete control; pick your metaphor, kids.... I watched the whole band last night, but there were times when I was transfixed with Janet Weiss' playing to the exclusion of all else.

The set list? Here it is. It was all nearly perfect, but the trio of "Sympathy," "Entertain" and "Jumpers" to close the set was one of those jaw-droppers that you want every band to pull off, but so few do. Other highlights for me -- the highlights of the highlights, if you like, because, really, the whole damn set just flowed perfectly -- were the swagger (there's that word again) of "What's Mine Is Yours," the understated tension of "Get Up" and "Start Together," the sinewy grit of "Ironclad" and that moment in "Light Rail Coyote" when it all kicks into high gear and Carrie snarls away at her vocal part. Yessss.

But really, I repeat: it was all nearly perfect. In fact, had they completely blown my mind and done my very favorite song of theirs -- "Let's Call It Love" -- which they played the night before in New York, my head might have exploded with just too much joy.

Sleater-Kinney. They are so fucking back. And I am really happy about that. Because otherwise there'd be a lot of regret. 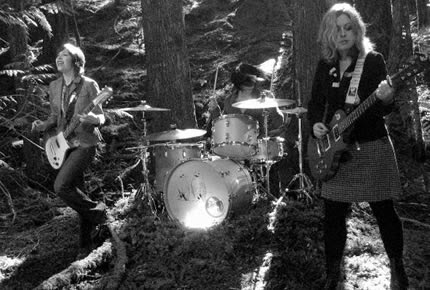