Squatting heavy past parallel: is it safe? Uhhhhh....

There are better ways to spend a Saturday afternoon than sitting in a hospital emergency room waiting to find out if you have a life-threatening blood clot, but, if you're the guy who might have that blood clot, there's actually, technically speaking, really no better way to spend your time than figuring that one out. And what does this have to do with squatting below parallel? Set yourself down, as Jed Clampett used to say. There's a story....

On a Sunday about two weeks ago, we took our dogs to one of those ridiculous "photos with Santa" canine events. I was fine with the concept for three of our four dogs -- it was a charity event, after all -- but Milo? He is afraid of everything, especially people he doesn't know. But my wife really wanted to try to get all four dogs in the pic. So we tried.

We failed. Milo hid underneath the bench that Santa and his helper are seated on. He's under there; I swear. 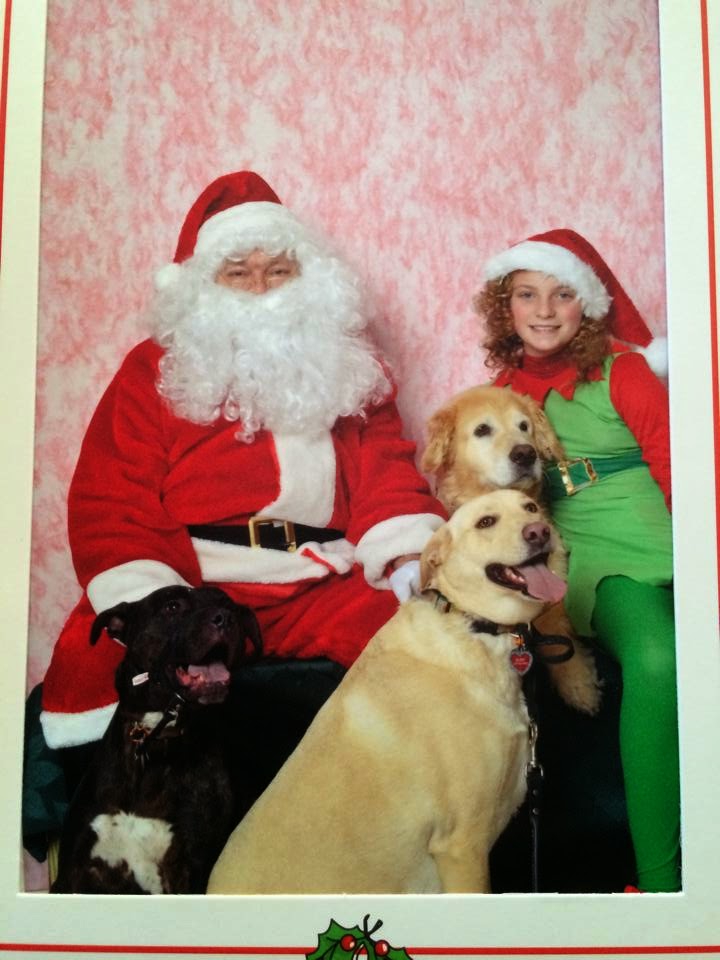 So we photoshopped him into the final product. You decide which edit is better. 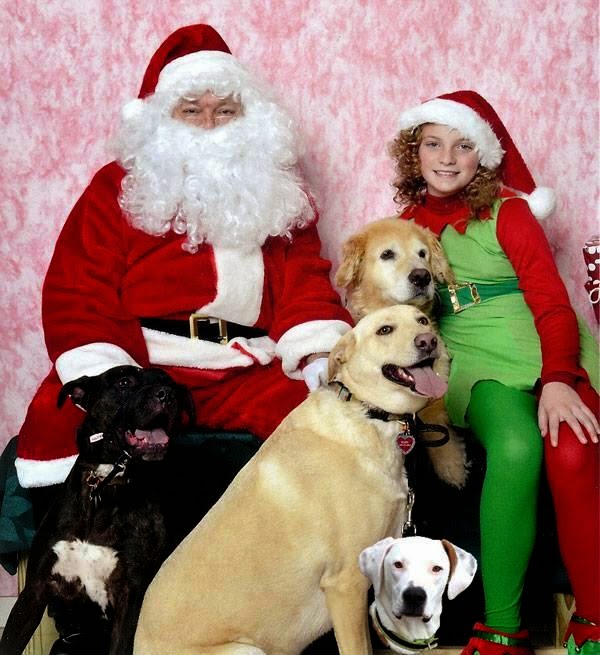 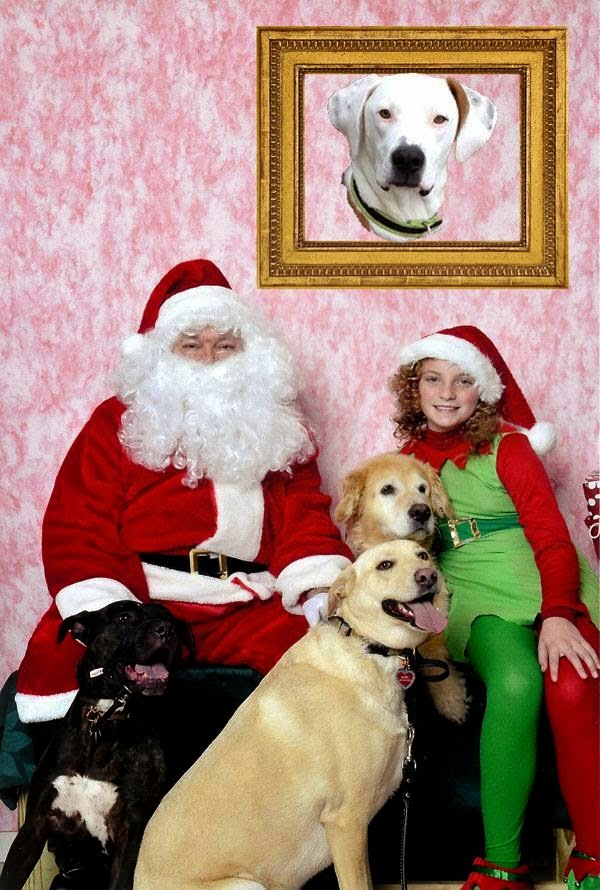 Anyway, he was not calm. At all. But we got him back outside after St. Nick and the photos, and, as we were headed for the car, a woman who fancies herself very much the Dog Person tried to greet the lad. I told her this was a terrible idea, because he is afraid of everything, and we tried to walk away. But she, remember, is a Dog Person. Dog People, whom I otherwise love, have one personality flaw: they do not believe that any of the usual rules about dogs apply to them, because, after all, they are Dog People and understand the inner workings of your canine's brain better than you, the owner, do.

She caught up to us, offering biscuits to both Milo and the other dog that I had with me. Holly, the hungriest golden retriever in the world, gladly snarfed hers down. Milo, however, was unconvinced that this enthusiastic individual was not The Person That Will Eventually Kill Milo Because That's What People Who Don't Know Milo Try to Do (At Least in Milo's Mind), and he tried to get away. She came closer. He tried much harder to get away. There was flailing, and leaping, and looks of sheer terror. Leashes got tangled and, for a brief second, he was loose and about to bolt.

I went horizontal, tackled him and grabbed the leash. He was safe. 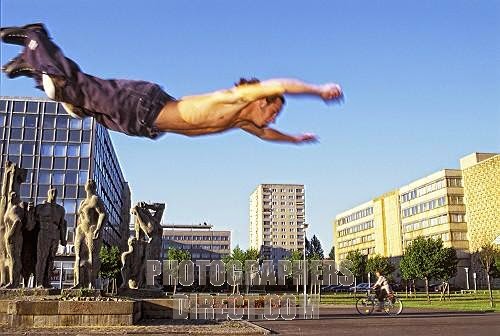 But, let's be serious, I'm 52 years old. You should not be shocked to learn that my chest was not, in fact, the first thing to hit the ground. My right knee was. Interestingly, it took a few days to really start hurting. Then it really started hurting. Then lower-leg swelling started. It wasn't extreme to my eyes, but when my son, the third-year physical-therapy doctoral candidate, was visiting on that Friday night, he was concerned. He pressed on the swollen leg. A large indentation appeared and did not leave for many minutes. He said, "I hate to tell you this, and I'm not going to insist that you go to an ER at 10 o'clock on a Friday night, but first thing tomorrow you are going to call your doc's office and tell them that you have pitting edema in your leg and that I think you need to be tested for a deep-vein thrombosis (a.k.a., a DVT, -- a blood clot that can lodge in the lungs and cause a pulmonary embolism). If you have one, it can't wait until Monday. Technically, this could kill you."

The next day, the doc complimented my son's diagnostic skills, and sent me immediately to the ER for an ultrasound with a similar warning that this issue could not wait another day. Six hours later, after the ER doc bestowed further compliments on my son's skills, and after I watched more ESPN sports documentaries than even I ever wanted to (god, those 1980s and 1990s Miami Hurricane teams were obnoxious jerks, weren't they?) , I got the verdict: I hurt my knee (I knew that) and it's draining fluid into my lower leg (I mostly knew that). But no DVT. Yay team.

So.... I still needed to figure out what was up with the knee. A couple days later, I got an appointment with a sports-medicine guy who specializes in knees. He was great. He seemed super-knowledgable about the troubled joint in question, and we shot the proverbial shit about CrossFit and the like. I got a diagnosis like this: "You strained, maybe even slightly tore, your meniscus, and it'll heal on it's own within a week or two. Just go easy on it. No weight-bearing exercises until it stops hurting, and take some ibuprofen at least twice a day until it stops hurting and the swelling is gone." And then I thought of a question: "Hey, while we are talking exercise and all that, what do you think of squatting below parallel?"

He prefaced his answer with: "Well, I want you to know I am a former powerlifter. You wouldn't know it by looking at me now [true, dat] but I was." Then, while demonstrating fairly awful mobility, he showed me an acceptable (to him) squat that didn't even make parallel, and he said, "And I hate to tell you but, unless you are competing, the risk of going below parallel just isn't worth the reward. You get slightly stronger that way while exponentially increasing the risk of injury. Squat right to parallel, but I don't see the point in going past it."

Shit. I was afraid he'd say that.

So I left wondering about all that. I then read a lot of viewpoints on the issue on the web.  I'm not going to cite to any of them, because, honestly, a couple minutes with your standard Googlemachine and you can find them all -- and leave as confused as I am about the right answer. But the competing points of view amounted to this:

1. What the doc said. The injury risk goes up a lot past parallel, and, unless you are a competitive CrossFitter, O-lifter or powerlifter -- and have to go past parallel for competition purposes -- there's not a sufficient reward-to-risk balance. Don't go past parallel.

2. All human beings should be able to squat past parallel. It's an essential movement. That changes a bit with a barbell, as opposed to an air squat, and, yes, there is an increased risk of injury if a heavy barbell squat is done wrong, but going only to parallel does almost nothing for your glute and hamstring development. It is totally quad-driven. For proper muscular balance, you need to squat heavy past parallel.

I'll be honest: I have no idea what the right answer is. Both make a fair amount of sense to me. But, based on a lot of conversations with my son the PT-to-be, who is also a skilled, strong CrossFitter, here's what I plan on doing: I'm going to keep squatting past parallel, but, in light of my age -- which has to matter in the equation, right? -- I'm going to be careful about moving too fast up the ladder in terms of weight, and I am going to put my knee wraps on from the outset of my squat sessions, rather than just putting them on when things go past 75% of my one-rep max, which was my former practice. I notice that I am so much more stable of a heavy squatter with wraps on, and so why not start off right away with that kind of stability? It can't hurt, right?

So that's my answer for now, and I fully reserve the right to change it at a moment's notice if contrary evidence/argument convinces me to do so. I also emphasize that, seriously, I have no fucking idea what the real "right answer" is. This blog is all about me muddling through and trying to find out what works for me. Not for you. If my quest for general injury-free strength and happiness influences your own, then that is awesome, but understand: I don't actually know any more about these things than anyone else. It's all about sensible experimentation, as far as I am concerned.