A return to the Pickled Heron for a spectacular pork dinner

A couple of years ago, I reviewed a Philly restaurant called The Pickled Heron. I ranted. I raved. I still stand by the notion that the foie gras I ate that night is the single most delicious food item I have ever tasted. It was a very good meal.

But Philadelphia has a lot of great restaurants, and, somehow, amidst going to a lot of those other places, we only made it back to The Pickled Heron once -- in 2013 -- for another great meal. So the other day when I saw an ad for this: 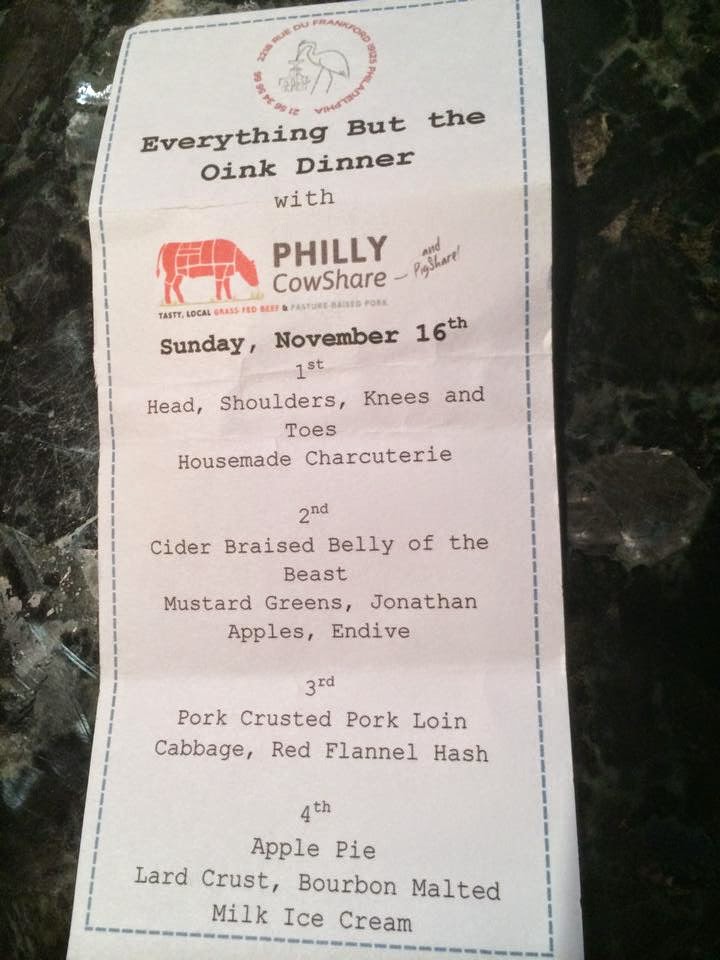 I made a reservation for my wife and me. Date night? Pastured pork from Philly CowShare? Done up right in a myriad of ways by Daniela D'Ambrosio and Todd Braley, the very same two chefs responsible for that foie gras? Sign us up. We even got a spot at the vaunted 5:30 p.m. seating -- "vaunted" to us because we are old and 8:30 on a Sunday night seemed like a really late dinner with work looming the next day. (Sleep is paleo).

The Pickled Heron is BYOB (but they now accept your Visa and Master Card, unlike the cash-only operation they were when we first went there; have I mentioned the foie gras we had back then?), and I am good with that. We splurged at the liquor store on a $35 bottle of Amarone for which most restaurants would have charged someone else (because we would never spend that much on wine) $100.

And into the restaurant we went. Todd and Daniela greeted everyone with a little spiel about the wonders of Philly CowShare (and they must be nice bosses because the same funny dude who was our server in April 2012 was our server again last night), and into the first course we were launched....

It was called "Head, Shoulders, Knees and Toes." There were three parts: head-cheese-filled croquettes, pork rillons on a small piece of semolina bread with mustard and a housemade trotter terrine with cranberries. I dig the nasty bits, so I loved it all, but particularly the first two items. The trotter terrine was also very good, but paled a bit in comparison to the other two. And the standout was the pork rillons, which took me briefly to a sunny hillside in my mind where I could gaze upon further memories of that foie gras. It was almost that good.

But, like a good first course ought to be, that was just a tame warmup for what followed: "Cider Braised Belly of the Beast." We both exclaimed, "Oh my god," on the first bite. I suppose that, in some sense, even a kitchen oaf like myself could find it hard to ruin pork belly, but this was so far on the "perfect" end of the scale that I can't even imagine making it myself. Daniela and Todd know their way around a kitchen.

"This one's called pork-crusted pork loin and, no, no one was drunk when this idea was made up. [Pause] I'm lying; of course they were." Server-dude then described the third course that he had put on the table. It was pork, wrapped in cabbage, wrapped in pork with corned-beef seasonings. And it sat on a plate with a "red-beet flannel hash" that exploded with flavor. You simply can't make this at home. You will fail in epic sorts of ways that will cause you to get drunk, but a drown-your-sorrows kind of drunk, not the celebratory one that must have followed (inspired?) the creation of this dish. This is why you sometimes go to places like The Pickled Heron and pay other people to make your food for you. 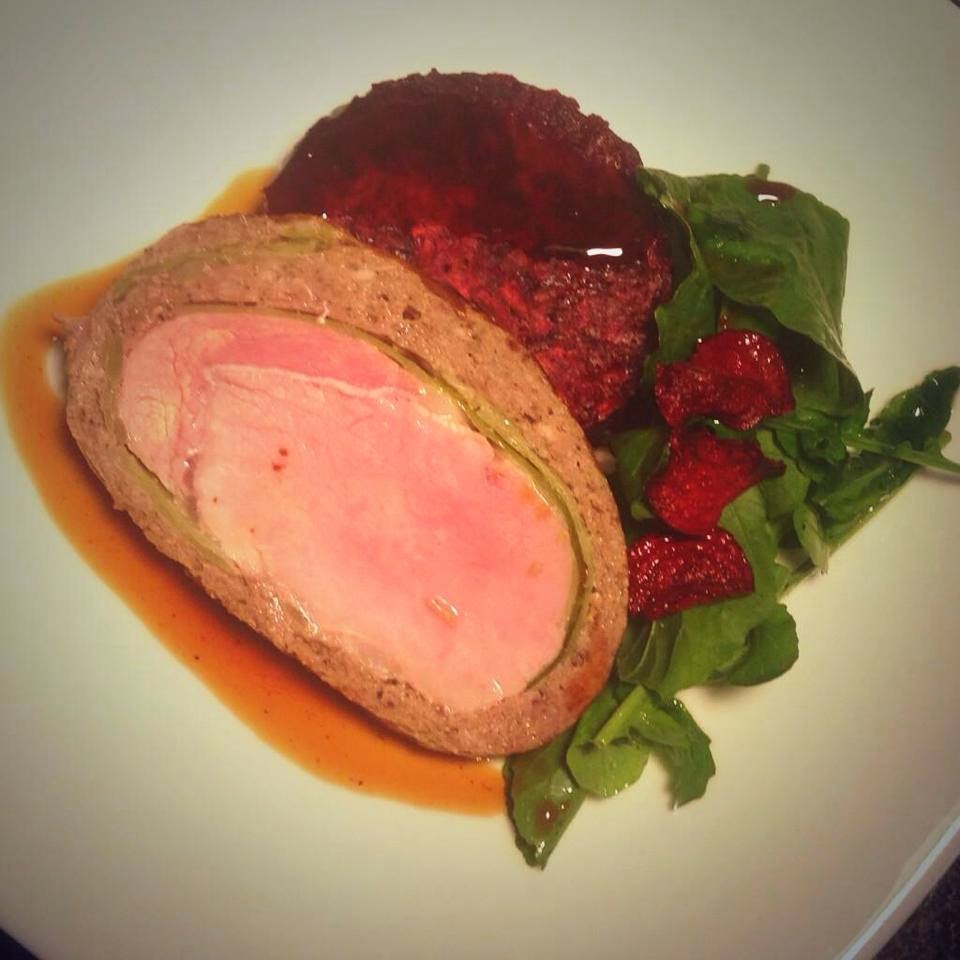 We were exhausted from all the deliciousness.

Dessert followed. Apple pie with a lard crust (from El Piggo, the real superstar of the evening) and a bourbon malted ice cream. Of course it was amazing.

In sum, they've done it again. The Pickled Heron has blown our minds with another meal. At the end of the dinner, we got to say hi to Daniela and Todd.  Of course they are absurdly nice people in addition to being talented chefs. (She said something like, "Yes! We know you. We follow you on Facebook! I love all your food stuff." I win!) And seriously, I've already placed a pastured-pork order this morning with PhillyCowShare. Everyone wins. Go eat at The Pickled Heron.

Having made it this far through this post without making jokes that involve the words "pork" or "head," I feel somewhat obligated to continue this unexpected venture into maturity and instead address a question that the paleoistas amongst us might have. I think that question goes something like:

Translated: some of you are likely pointing out that some of that meal wasn't very paleo.

Wellllll, sort of. Actually it was pretty paleo. And here's my deal with the parts that weren't: I wanted to eat them, and I eat whatever I want. It's that simple. I eat pretty close to a Whole30-style version of paleo at home these days. I never eat wheat at home (and almost never anywhere else either) and I have found that a number of things other than wheat bug the crap out of my stomach if consumed with any regularity. Lately those things have been dairy, coffee, black beans, tomatoes and red wine, so I hardly ever have them. But yes, I was pretty sure that the small doses I had of wheat and dairy and the not-so-small dose of red wine were worth it in terms of (a) having fun and (b) minimal hassle. So I ate every single thing on my plates. My wife ate every single thing on hers. This caused our server to say, "You guys are the ones I never have had to doubt during this meal."

And sure enough, by the way home I had enough of a burn in my stomach that some activated charcoal was my savior. (Seriously, it is the escape hatch from questionable food decisions).

As that wise man once said, "Buy the ticket; take the ride." Eat whatever you want; just know what you really want.