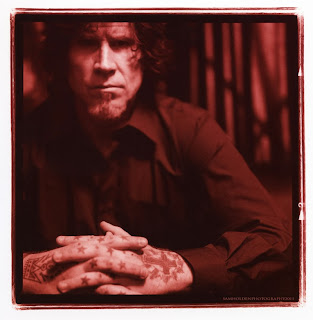 The first time I saw Mark Lanegan onstage was a late 1980s Screaming Trees tour when the band opened for fIREHOSE at a small Philly club, long since defunct, called Revival.

Until last Saturday night, that was also, somehow, the last time.

And really, I have no idea how that happened. That late-'80s show was cool, but, for my money, the Trees never hit their full-on groove until Barrett Martin signed on as drummer for the Sweet Oblivion record. Released in 1992, SO is, as far as I am concerned, the single greatest album to come out of the grunge era. It has competition, for sure, from the likes of Mudhoney, Nirvana and Temple of the Dog, but SO is flat-out perfect. The bottom end of that record undulates like the best Black Sabbath (which would be Volume 4, if we are keeping track), while Gary Lee Conner wah-wahs and wails on lead guitar and Mr. Lanegan finally fully discovers the power of the low-end range of his voice amidst songs that give the band a little space and room to move.

It may be a notion without any actual facts behind it, but it's been my theory -- and I am sticking to it -- that what finally flipped the Trees into awesomeness, from merely being a very good band prior to Sweet Oblivion to the zenith of that record, is that Mark Lanegan got musically out and about, courtesy of his first solo album -- a stunning, brooding piece of melancholy and anger called The Winding Sheet -- which was released in 1990. Very different from the Trees records that preceded it, TWS ditches most of the psychedelia in favor of an indie/Americana hybrid that just plain seethes. The Trees album that immediately followed, 1991's Uncle Anesthesia, hints at incorporating aspects of Lanegan's newfound style, but it is Sweet Oblivion where the whole deal gets fleshed out, fully hybridizing the strongest points of the Trees with the best of Lanegan's solo side, and, yeah, Barrett Fucking Martin on drums. (Yes, that's his middle name). It is a perfect record.

Anyway, I missed the Trees after SO came out, missed 'em again when 1996 brought a solid effort from them called Dust, and then... they broke up. In the meantime, Mark Lanegan released another great solo record, Whiskey for the Holy Ghost in 1994, and then he got really busy. There were numerous solo releases, and also collaborations with Greg Dulli, Isobel Campbell, Queens of the Stone Age and the Soulsavers. Every single one of those records is solid, and a few are pure genius. In fact, I don't think you can find any two better albums from the last ten years from anyone than Bubblegum (2004) and Blues Funeral (2012). Those two, while very different from the Screaming Trees, share one thing with Sweet Oblivion: they showcase all sides of Mark Lanegan -- a deep whiskey-drenched tone on the slower, quieter songs and a range from a whisper to a roar on the more uptempo ones.

But still, somehow, I never saw him live during any of that time.

So, with great anticipation -- for good reason -- I bought tickets for his October 12, 2013 show at Underground Arts in Philadelphia. But I was a little wary too. I had heard that he wasn't touring with a band this time. OK, much of the solo stuff burns so beautifully at a reduced level of attack that *that* was OK, but then there was the new album, a covers record that Lanegan seemed, from interviews, to really enjoy making, but it wasn't grabbing me like the rest of his catalogue. Yeah, I love the John Cale cover, and a couple others are cool, but I feared a covers-heavy set at the expense of a broad career-spanning setlist.

Let's be clear: I'm a dope, and my fears were completely unwarranted.

First of all, about those stupid fears, he only did a few from the new album. Three songs mid-show from it were a solid sampler, and their lessened level of grit, compared to the rest of the set, was a fine demonstration of a wide range of styles. Secondly... no band? It may have been even better this way. Everything buzzed with tension, except when it roared, and yeah, when you bring along a guitar player as accomplished as Jeff Fielder... wow. The dude can play. He was covering for a whole lot of sound on some of the Blues Funeral and Screaming Trees songs, and he did it brilliantly. And where he just needed to back off and smolder a bit, like on the B-side "Mirrored," you could hear the smoke rising from the strings. I was impressed.

And the man himself? Even on a stage bathed solely in red light that makes everything a shadowy affair, when Mark Lanegan speaks -- or, better, when he sings -- he commands your complete attention.  The room was duly enraptured, start to finish.The setlist featured songs ranging all the way back to the Trees' Buzz Factory album, his first solo record, many of the solo albums in between (with wonderful emphasis on Blues Funeral, Bubblegum and Field Songs), a Soulsavers song, and even a stunning take on a B-side. It was truly brilliant.

And it all ended with a trip back first to The Winding Sheet for "Wild Flowers" and then a "Halo of Ashes" from Dust that rose and fell with dynamic tension, astounding guitar-playing and Mark Lanegan vocally letting loose even more than before. He said, "Thanks for your no-bullshit attitude, Philly. I like it here." Right back at you, sir. It was a pleasure.

- Posted using BlogPress from my iPad
Posted by Steve Kirsch at Monday, October 14, 2013