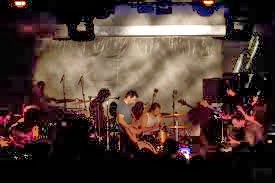 The drone starts before you know it.

I realized, while I was talking to a friend of mine, while we were waiting for Montreal "post-rock" collective Godspeed You! Black Emperor to take the stage, that a bass-heavy drone had already begun on the empty stage. And it was getting louder.

You could see -- and hear -- over the next ten minutes or so, people ending their conversations and turning toward the stage. And then the lights went out, band members appeared and the films began.

The only illumination onstage for the nearly the next two hours came from the red glow of amplifiers and the ever-present black-and-white movies that played behind the musicians.

It was arty and totally weird, and fucking amazing.

GYBE works a soft/loud/soft dynamic similar -- in a generic sense -- to other instrumental bands like Mogwai and Russian Circles. But sheer numbers -- there are eight members of GYBE (two drums, two basses, three guitars and a violin) -- and a sense of patience that other bands can't approach, mean that the soft-to-loud build of most of their songs is long, drawn out and ultimately more overwhelming. The listener that hangs in there through the early drone, into the build, and then beyond, is rewarded with a level of attack that is simply pummeling. The best description I could come up with was a melange of 1968 instrumental Pink Floyd with the late-1980's Butthole Surfers with a symphony along for the ride. But I'm not sure that's adequate. And the sheer disruptive chaos of the films behind the band only adds to the power of the performance.

That early quiet drone built over ten minutes or so into a frenzied roar and the word "HOPE" flashed intermittently on the screen, and remained in place only then to cede way to "Mladic." This band's politics can be a bit of a mystery, but its ability to convey the dread and fear caused by the title's namesake is awe-inspiring. When what appears to be the soundtrack to a chaotic Serbian war dance of some sort began (see: about 7:10 of the video below), believe me when I say that there was no one in the room doing anything but staring at the stage, in rapt attention.

Somehow, after that, the band kept it all going at that level through three more extended pieces that were similar in that they all rose and fell, rewarding the patient listener with brutal levels of volume and thunder. But "Gathering Storm," "Moya" and "Behemoth" each distinguished themselves with unique twists on the dynamic theme. And "Behemoth" was a particularly apt closer: nearly 45 minutes of a draining, pounding attack that took a break for a quieter interlude, only to return, even louder, and then drone to a close, with the band members individually leaving the stage and one of the drummers turning down the last guitar to signal the end.

It truly was a stunning spectacle that GYBE put on by simply walking onstage, playing their asses off in near complete disregard of the location, setting etc., and then leaving. It was my first time seeing them, but I don't think I will ever miss them again. This show was like nothing else I have ever seen or heard.