Review: Peter Hook and the Light playing New Order at the Troc in Philadelphia 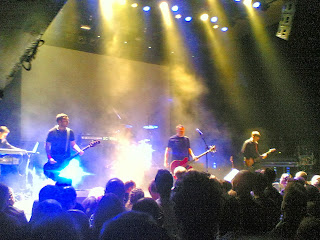 You may recall that a while ago I reviewed the reissue of Greg Everett's brilliant "fictionalized autobiography" of his formative years -- Screaming at a Wall. In it, there is a repeating theme: Life is short, and I am running out of time; so let's go.

I fully concur with that particular notion, and so it was with great interest that I read a few interviews with Joy Division/New Order bassist Peter Hook in which he seemed fixated on the same notion. In Hook's instance, a few years back, he started a project: play every song he ever recorded live, on tour, with his band The Light. He began -- as well he should have -- with Joy Division.

I could do three or four blog posts alone on what that early-1980s gloomy Brit scene meant to me at the time. I *liked* lots of it, but two bands -- Echo and the Bunnymen and Joy Division -- stood head and shoulders above the pack, for my tastes. Amidst a scene dominated by what Lemmy once called "a bunch of blokes in long overcoats moaning about how miserable the world is," those two bands -- while undoubtedly all that -- were full of raw power, especially in live recordings. They seemed to understand that gloom and grit were much more, well, *powerful* when harnessed together. I dug, immensely.

And I got to see the Bunnymen a whole lot of times (those memories could fill a whole 'nother blog post waxing about the one-two punch of Will Sergeant's guitar and Pete deFreitas' drum attack.... that'll be another day....) But Joy Division never got themselves over here to play. Right before their first U.S. tour, lead singer Ian Curtis committed suicide, and the remaining band members moved on, becoming New Order.

And then New Order quickly moved on as well, morphing from a very brief sonic foray into Joy Division Take Two (their first album, Movement), through a period of epic genius (the second album, Power, Corruption and Lies, and the singles of that era as well) that merged the JD sound with a more electronic approach, and thereafter into poppier, more *commercial* songcraft that, frankly, lost me a little.

So, in the last few years, having left New Order amidst some rancor, Hooky formed this band, Peter Hook and the Light, and his first move, a couple years ago, was to tour playing Joy Division songs, eventually expanding the band's repertoire to include, I believe, every JD song.

I missed those shows. I am somewhat unclear *how* I missed those shows. I saw the Bunnymen play their first two albums, raw and loud, on a reunion tour in 2011, but Hooky's JD appearance? I skipped it. Maybe I doubted his vocal skills (he wasn't the lead singer in either Joy Division or New Order)? I don't know, but I fucked up.

I heard good post-show reports from those tours, and then I heard an interview with Mr. Hook on the Sound Opinions radio show on NPR. What I heard from him there sounded nothing like what I expected, which was a jaded twat of a rock star bitching about his former bandmates. Instead, he seemed genuinely, and humbly, into a simple notion: Joy Division and early New Order had great songs, and no one had been playing them for years; so, life is short; let's go do something about that. Better yet, let's do it really spectacularly well and powerfully, with respect and, yeah, *joy*.

So, almost simultaneously upon hearing that interview, I did two things: bought Hook and the Light's Live in Australia album, where the band plays all of Joy Division's first album, Unknown Pleasures, plus some early singles, and bought tickets to see the band playing in Philly -- touring, get this, the first two New Order albums in their entirety, plus early singles.

Best decision I made all year? Quite possibly.

The live album is spectacular. The songs are, unleashed from the sterile production of the studio records, almost Who-ish in their scope. And the vocals are nearly perfect. No, Hooky doesn't have Ian Curtis' vocal range, but he has learned how to work brilliantly in the range that he has, often adding a gleeful "Yah!" as the band drives forward at full power. Highly recommended, particularly for curious JD fans wondering how these songs sound, 30-some years removed from their beginnings in Manchester.

But the live show? My god, man. Go see this band.

First of all, there are two bass players -- Hook and his son Jack. Jack plays all Hooky's parts when Hook sings, and then the man himself joins in, going, of course, way up high on that bass neck to deliver his trademark solos and riffs. The interplay between the two of them is wonderful to watch. At more than one point, Hook stood, poised to take over, as Jack pounded out his riffs and smirked, shaking his head, as if to say, "Hold on, dad. It's still my turn." And then, done with his part, Jack grinned, nodded his head and Hook took over, the two of them crouched down in the same stance, beating the living bejeezus out of the bass strings. The rest of the band are no slouches either, expertly (OK, mostly.... There were a few glitches, comically laughed off) recreating the full power of the early New Order albums. Let's just say that their epic post-punk glory has a fair share of right-now punk in it. This band roars and thunders.

But all of that wasn't even the best part.

I went into this show with only one regret: that it was, seemingly, entirely focused on New Order, and not Joy Division. I dearly love early NO, but Joy Division? Whoa, it's much more than love. So Hooky did us all one better than the already-epic step of playing the first two New Order albums: he and his band opened for themselves with a quick set of Joy Division.

Billed as the Slaves of Venus -- an early, thankfully rejected, name for JD -- they blasted out seven Joy Division songs, returned to the stage a short time later, and did all the early New Order, and left us with minds blown. The setlists? Slaves of Venus on the left, Peter Hook and the Light on the right:

Knowing about the Slaves of Venus in advance was great. It allowed me to make a request of Mr. Hook beforehand, via Twitter, for my two favorite Joy Division songs: Disorder and Twenty-Four Hours. It went like this, a few hours before the show:

As I left my house for the show, Hooky retweeted it. Totally geeked by this exchange, I was pretty sure I was going to get my wish, and I did, with the added extra of my *third* favorite Joy Division song -- Interzone-- sandwiched between those two. It was glorious,and, for my money, the finest use of social media ever.

Other highlights? I kid you not when I say that it was *all* a highlight. New Order's Movement is a brilliant record, but it can be murky. It's not murky at all when Hook and the Light get a hold of it. The dynamics of this band are unbelievable, and they turn a run of songs like, for example, all of side two of Movement--which is solid on album, but not mindblowing--into a force of nature that seems just a short leap to, say, Quadrophenia.

And the "big" songs -- you know, like Age of Consent, Leave Me Alone and Temptation? Let's just say that this is not one of those shows where the "hits" seem rote or by-the-numbers.

I may have even uttered the words: "Now I think I can die happy," after the band finished turning Temptation -- what is already one of my favorite songs -- into something even more. They put punch and guts and glory into a song that I didn't think had room for any more perfect than it already had.

Word is that, in pursuit of his noble goal of Playing It All Before He Dies, Hooky and band will be back next year touring New Order's Brotherhood and Low-Life. I don't love either of those records (although Sunrise is a serious keeper of a song), but I am pretty damn sure that I will be there front and center to see this band roar through them. Well played, Mr. Hook. Well played.