Another way to cheat the reaper: slowing down the clock 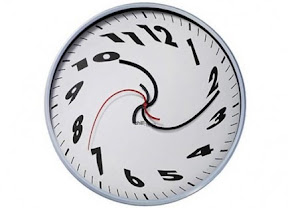 You may recall that, a few months back, I reviewed the reissue of Greg Everett's book "Screaming at a Wall." In the review, I wrote that one of the most pervasive themes of the book is the notion that the author is "running out of time."

I totally identify with that concept.

If there is one thing that turning 50 did for me last year, it was to increase my sense of urgency to seize the moment and enjoy life whenever possible. That trip you want to take? Do it. Whatever that thing is that you are thinking about doing to make your life better, get on that stuff now. Life is short. And it is getting shorter.

As a friend who had just turned 50 said to me at the time, "Steve, if we are lucky, we have 30 more really good years on this planet. Then *maybe* five more after that that won't be so bad, and then it's awful from there on out." Bleak? A little, but it's more likely true than false. And that bleakness is with a healthy life that goes until 85! Reality could be much harsher.

So, the concept of time is a heavy one for me. I don't like wasting it on stupid stuff. I don't like finishing a day, a week, a month, whatever, with loose ends hanging or shit that hasn't gotten done.

What does this have to do with skipping breakfast?

I swear to you that the whole skipping-breakfast thing -- which you can read about here as well as here -- is the most glorious gift of time that I have ever received.

Simply put, I had no idea how much time I was spending on that extra meal. Between the absence of prep, eating and cleanup, I think I am getting back at least 45 minutes a day.

It's huge. Add to that the mental clarity that comes in those fasted morning hours, and the amount of work that I churn out in less time, and I bet that it is more like 90 extra minutes a day on average that skipping breakfast is giving me. I am a pre-breakfast fasted king of TCB.

And I have sworn to myself that, as a general matter, I am not going to push myself to fill that extra time with bullshit. So far, I am doing pretty well with that pledge. I have done my best to *enjoy* the extra time.

Skipping breakfast is not for everyone, but, if it works for you, you may find that it isn't just a ketosis-fueled excursion into the land of extended fat-burning; it slows down the clock.