Sometimes, even the paleo/primal purists have to roll with the punches a bit.

As I just mentioned in the last post, we are doing a lot of high-altitude hiking in the Eastern Sierras over the next ten days or so. Most notably, we are hiking up Mount Whitney -- 22 miles total, elevation from around 8300' to about 14,500' and back down again, all in one day.

Standard-issue meat, veggies and fruit does it for me most days, but this Whitney excursion is going to require, glycolytically speaking, an ingestion of carbs and fat that would, quite literally, require me to carry way too much weight up that mountain if I were to attempt it with only real food. So.... In addition to a lot of lunchmeat (protein!) and water, what else, foodwise, is going into the backpack?

Gu. A *lot* of Gu. It is lightweight, gluten-free and it will give me a shot of much-needed carbs. Often. Some of the Gu is even lightly caffeinated. Nice.

A whole jar of peanut butter, flavored with honey. I don't normally eat either peanut butter or honey. But, almond butter is hard to come by where I am at (the grocery selection is pretty lame here.... No grassfed meat, for instance), and the ingredients list on the jar is basically just peanuts, palm oil and honey. Carbs and fat galore.

And, just to make sure I don't bonk, a few packs of that Starbucks Via instant coffee that you can mix with cold water.

No, much of it's not very "real" and I wouldn't normally eat this nonsense, but occasionally, when life throws you a huge opportunity to do something awesome, but off-the-scale in terms of its caloric/nutrition demands, you have to do the best you can and jump back on the paleo wagon as soon thereafter as possible.

I will let you know how it goes.

And yes, that really is the name of one of the flavors. 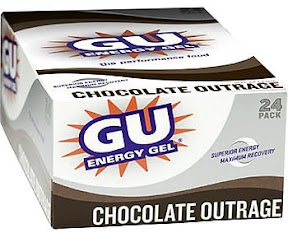