Back on October 10, 2010, right around the time my old computer gave up the ghost, my 16-year-old son Sean and I ran in the 3.15-mile Mid-Atlantic Warrior Dash, held at a paintball place in Quarryville, PA. I highly recommend these sorts of antics to anyone who likes to run and doesn't mind getting dirty. If, like us, you are a CrossFit person, you have double the reason to do it because it incorporates a lot of your CF training when it comes time to go over/under/through the various obstacles on the course.

You can check out a course map for the race here. But, basically, it's a whole bunch of obstacles scattered over the 3.15 miles. If you want to get any sort of decent time, you need to take off reasonably fast at the start, or else, as happened to friends of ours, you will get stuck in lines at obstacles. Not us, though. We weren't flying, but we were just fast enough to avoid the lines.

I should mention that the whole operation was really run smoothly. When you check in, there were a bunch of alphabetically arranged lines to pick up your number, timing chip, etc. There was a great, well-organized checkpoint for any gear you wanted to store during the race, and yes, they give you cool fuzzy Viking helmets. We didn't wear ours during the race, but a few people did. I can't imagine that those were anything but filthy by the end. 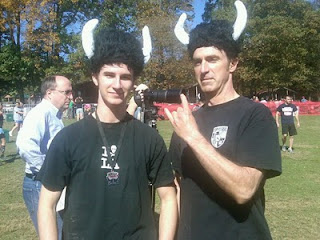 The good organization was even evident in the way the course was plotted out. You had to run for just short of a mile before hitting the first set of obstacles. That distance allowed the racers to sort themselves out really well, so the backups didn't begin until long after we were through. Of the first six obstacles that you'll see on the course map, none were particularly difficult. The "tankers" that you had to climb over had well-positioned ropes for assistance. I suppose the cargo net was the toughest of that first group, if only because I'm a klutz and got my feet caught on the descent.

But as soon as that section was done, there was a short sprint across a field (if you are a runner in real life, you can make up a ton of time on the open sections), a quick climb through some wires that were strung across the woods, and another dash through more woodsy trails. This pic makes me look faster than I really was: 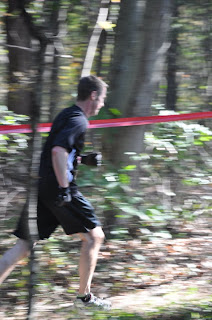 Then came the muddy stuff. There was a short blast through a tunnel, and then a big splash into the Breathless Bog. A word to the wise: don't do what I did and figure the bog can't be very deep. In this section you had to wade into the swamp and vault over a set of four or five logs. It turned out that it made a huge difference on which side of the log you were standing. The side closer to the shore was in only about 3 to 4 feet of water, whereas the side farther from shore was about 5+ feet of water. Stupid me was on the deep side of each log and it's an effing miracle that I didn't end up with a waterborne parasite thanks to all the swamp water I swallowed.

As soon as you cleared the bog, it was up and over a series of wooden boards/hurdles, into and out of another much smaller bog and up a muddy creek bank. Most people chose to walk these sections and the muddy parts in between, but I passed a ton of people by jogging these parts instead. It must've been a hell of a sight -- me staggering/running past my fellow mud zombies. The muddy creek bank was particularly interesting. You had to either hold on to tree roots or just jam your hands into the mud and hope to hang on as you climbed. Thankfully, that part was over quickly and, once we rounded a bend, there was a cheering crowd and a mud pit with barbed wire to crawl under! 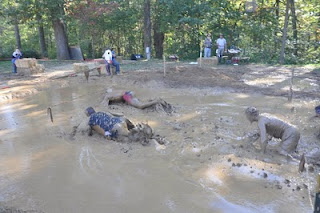 A few guys -- two of them are with me in these photos, dove in headfirst. Others (who got booed) tried too hard to stay clean and actually walked between the sections of barbed wire and just kind of ducked under the wires. That seemed lame to me, so I took the middle road -- sliding into the pit feet-first, but then crawling/splashing all the way across and under the wires to the end of the pit, after which the race ended with a leap over a "wall" of flames (really a bunch of Dura-Flame logs). 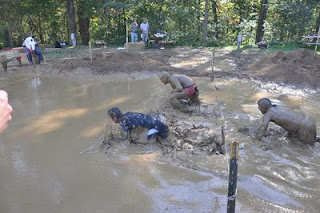 You end up muddy, and really happy. 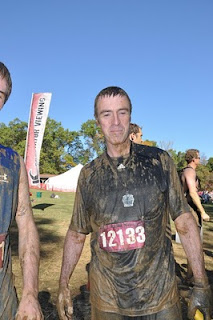 So, you might ask....how do I train for such a race? The best suggestion I have, and it's a CrossFit-inspired one, is to run as many 400-meter sections as will make up the race (in other words, for a 3-mile race, that would be about 12 400-meter intervals) and between each 400, do 10 of something (e.g., pushups, situps, burpees, push presses with a weight bar, pullups, ring dips, whatever). If you can do that, you will have no problem getting a decent time in a Warrior Dash. I was nursing a bad/recently-strained hamstring, and I finished in 27 minutes and change. My kid beat me by about 90 seconds. Neither of us are close to elite/fast runners. But we both finished up reasonably high in our age divisions, so we were happy.

We had so much fun that we are already signed up for the Poconos WD in June 2011. On the other hand, I am signed up for a "regular" 5k Thanksgiving weekend and may have to splash through puddles just to make it interesting.
Posted by Steve Kirsch at Sunday, November 14, 2010