Last night, I sat down with a freshly-bought copy of Mogwai's Burning movie. It's a 48-minute, black and white concert film spliced together from a three-day run the Scottish (mostly) instrumental quintet did at the Music Hall in Williamsburg, Brooklyn back in April 2009. The easiest way to get it is as a bonus DVD disc to the recently-released live CD Special Moves. 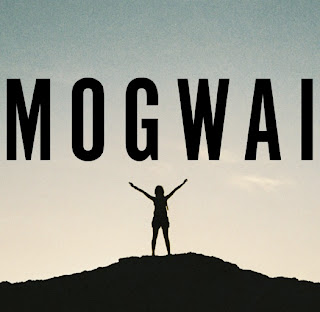 It's taken me a little while to reach this point, but, holy jebus, Mogwai is good at what they do. And the movie enhances every aspect of their considerable attack. My initial thoughts on the band were formed a few years back when I bought a couple albums, liked 'em fine, but dismissed them a bit as just another band working a loud/soft thing. Well, yeah, they are "working a loud/soft thing," but they clearly are not "just another band,' and there's a lot more to them than loud/soft -- particularly just enough rhythmic complexity to be interesting as hell without lapsing into proggy King Crimson-isms (not that I don't have an occasional weakness for those, mind you).

Burning takes all of that rhythmic and dynamic tension and ups the ante with wild/weird/closeup camera angles that start as disorienting and distorting and end up placing the viewer not merely in a front-row position, but onstage, up-close and personal. As a drummer, I particularly gravitated to the many shots that hovered just inches above a ride or hi-hat cymbal, or occasionally backed off just enough to give Martin Bulloch the chance to thrash and pound with precision, all seemingly only an arm's reach away from the camera.

You feel like you are in the band at many points of this film ... like on the super-quiet bit of "Mogwai Fear Satan" where the band members exchange knowing glances, after which feet tap pedals and the world of near-silence disappears into a cataclysmic explosion of sound and light. It is awe-inspiring.

And the pacing of the film could hardly be better. Things start slowly and deliberately with "The Precipice" and "I'm Jim Morrison, I'm Dead," falter ever-so-slightly with the only vocal song in the film, "Hunted By a Freak," and then take off, never looking back, and barely breathing for air, with a five-song run of "Like Herod," "New Paths to Helicon, Pt1," "Mogwai Fear Satan," "Scotland's Shame," and "Batcat" that left me reeling.

Interspersed throughout the between-song bits are shots of the area around the venue, jarring the viewer even more by quickly jumping back to the onstage closeups only seconds later.

It's an amazing movie, maybe even the best pure concert film I've ever seen, and it has me just a little sad that it's still five months until these guys come to Philly. I already have my tickets, and I suggest you get yours.