The Little Garage Gym That Could

In June 2010, I quit the standard-issue gym where I'd been keeping myself in okay shape, and I showed up at 7 a.m. at a one-car garage in the suburban town of Cherry Hill, NJ, ready to try CrossFit.

These were the early days -- for New Jersey anyway -- of CrossFit. At the time, there were two CF gyms in the area, and I chose the upstart for a really simple reason: I was fairly sure that I was a decently fast runner for an old guy, but I otherwise didn't know anything about barbells. So, my brain reasoned, I could embarrass myself a lot less at a smaller CrossFit gym, especially a new one. We'd all be newbies in this thing together, sucking toward some higher goal, right? Right.

When I say, "One-car garage," I shit you not. This wasn't one of those sort of 1.5-wide garages where you could keep the beer fridge on one side of the car and maybe a folded-up ping-pong table on the other side and still have room to open your car door. Nope. One car. One. (Count it). To make room, the car was parked outside. There was a pullup bar. One. There was a barbell and there were some weight plates. There might have been two barbells, actually. There were some dumbbells and a fucked-up-looking thing or two that I later learned was called a kettlebell.

I remember a few very specific things about that morning:

--Justin and Alycia, the owners, were really nice, enthusiastic, and ready to talk all things CrossFit at the drop of a hat. As a new convert, so was I, so the CF-oriented yapping was exactly what I wanted.

--Justin played loud music and also told me that he played bass in a band. Now we were getting somewhere. CrossFit and music/band talk? Sign me up. (I signed up).

--I deadlifted for the first time ever. Dude. Deadlifting. I felt like Barney in the Simpsons when he has that first drink ever and yells, "Whoa. Where ya been all my life?" It was like Jesus, the Buddha, and the Quaker Oats man had all shone their little lights -- or whatever it is that they do -- on me simultaneously. I was hooked. This deadlifting was a thing I could get into. It was nothing like Olympic lifts -- cleans, snatches, or jerks -- all of which seemed at the time more like magic tricks than actual achievable feats. Deadlifting was just digging in, with the right basic form, and standing up while holding a heavy thing that had been on the floor. I've never stopped loving deadlifts. Ever.

When I joined CrossFit Aspire, I think I was the fourth member. I learned a lot. I got really fit, not just runner fit. I eventually, a few years later, got a three-rep deadlift at 425 pounds that made my then-51-year-old self pretty effing happy.

But back to 2010. Fast forward to the end of that first year and there were enough people showing up on a regular basis that Justin and Alycia ditched the garage for a rented space. The new place seemed huge.

A year later the gym got even bigger, moving to a much larger space. That one seemed extra huge.

From 2010 through 2015 -- when an injury sidelined me enough that I quit CF altogether -- CrossFit Aspire, whether located in a garage or a giant warehouse, was a centerpiece of my life. CrossFit gyms are rarely just gyms. They have parties and dinners and pig roasts and generally become an important part of a member's social life.  Even after I quit, my wife remained an Aspire member and we still hung out with lots of CF friends fairly often.

My wife got an email yesterday that CrossFit Aspire is closing -- for good -- in less than two weeks. The gym world is rough, and never stays the same for long. A thriving enterprise one year is yesterday's news the next year. I don't even know all the details. I just know all that matters: that consistently, without fail, over the years Justin and Alycia ran a top-notch facility where the nice people were in charge and attracted a clientele that includes some of the best people I know.

Impermanence is a repeating-theme blues in all of our lives, and gratitude is not overrated. So you cherish the good times and the people that made them. And you move on, but always remember. Thanks, CrossFit Aspire. "You changed my life for the better" might sound trite. Nope. Really. You did. 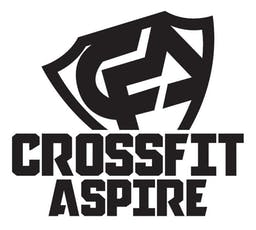