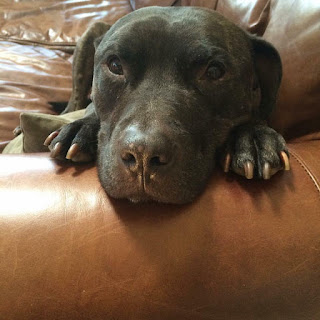 It's the little things, like when you go to prep their meals, and now suddenly there are only two bowls. Or when you go to give them their "right before bed" biscuit, and you grab three and, half a second later, you think, "Damn. Right...." and you put one back. Or when, for the first time in three years, you walk through your kitchen, free to change direction at will without being impeded by a knee-level nearly-concrete noggin, followed always -- always -- by a wagging tail, even when the knee/noggin collision was pretty hard. And then there's the middle of the night when you realize there's no longer the chainsaw sound of a pit bull snoring.

However, that rule goes out the window when you adopt an old dog.

All we knew about Cyrus when we met him in early 2014 was that his life had been miserable thus far. He and two younger dogs had been taken from a local home by the SPCA. The living conditions were awful. That house was filthy and there was not enough dog food. In fact, the lack of food was the source of Cyrus's facial cuts. His own daughter had attacked him over some scraps.

At the time, we didn't even really know how old Cyrus was.  We just knew that, although he looked like he'd gone a few rounds in a losing title match, he had good energy and tail-wags to spare. My wife and I volunteer at the county animal shelter where he'd been brought and so we got to know him over a few months of shifts there. We kept expecting him to get adopted based on his unfailingly -- some might say absurdly -- positive attitude. But a few things seemed to be impeding his adoption: (1) he was clearly not a young dog; (2) he was scratched-up enough that he looked like he'd been the victim of a fighting ring; (3) his paperwork said he didn't like other dogs.

With three other dogs in the house at the time, we initially didn't even consider adopting Cyrus. We'd walk him when we were at the shelter, but we couldn't bring a cut-up old guy who hated other dogs into our pack. But then we slowly noticed something: he didn't really seem to dislike other dogs. He seemed mostly indifferent to them. There are, generally speaking, two kinds of dogs: "dog dogs" and "people dogs." Cyrus was clearly a people dog -- he loved all people -- but, despite his history of getting his ass kicked at least once by another dog, he didn't actually seem to fall into that subset of people dogs that hate other dogs. He just didn't care.

So one day, my wife came home from the shelter and said, "I think I found a dog that we should take in." When I asked who it was, she said, "You're going to be surprised. It's Cyrus. He's kind of old and he's really hurting on the concrete floors at the shelter. He's suffering, and no one's adopting him. It's been months." I agreed. And so we developed a plan. 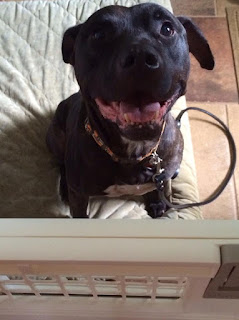 The system worked like a charm. They got all their suspicions out of the way over that time. Eventually, we'd let them hang out together as long as we were supervising. 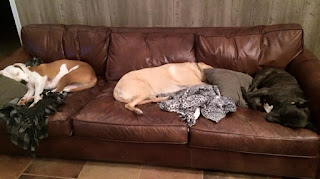 We had brought him home on July 14, 2014. When we took Cyrus to his first vet appointment, we got a surprise: he was even older than we thought. The vet guessed nine or ten years old. At the time, I remember saying that, in light of all his years of rough living, we'd be lucky to get two years out of him.

We were lucky to have him in our lives. Cyrus loved us both, but he spent every day with my wife, who works almost entirely from home, and so he established a regular routine for a pit bull: following his favorite person around. Upstairs, downstairs, outside, inside, from room to room to room. Only the basement was off-limits (the cat box is down there; the dogs aren't allowed), and so, if she went down there, he'd wait for her at the top of the basement stairs, wagging his tail. If she were out of the house, I would immediately become his favorite person, and he'd pull the same routine with me. If we were gone, he would deign to hang with the other dogs. But mostly, he hung out in my wife's office with her. 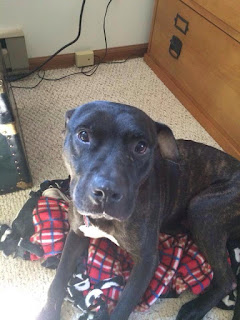 We used to joke that Cyrus's nightmare was to be alone with his thoughts. He didn't like to go outside alone. He could be bursting at the seams to pee, mind you, but he'd insist on waiting for another dog to accompany him. Solitude was not a priority for him; it was the enemy to be avoided.

Cyrus was also young at heart, but old of body. So he'd grind his gears trying to keep up with Milo, our younger male boxer/hound mix. And grind he did.... He came to us with significant arthritis, but it got worse. He played hard, and he slept more and more. Slowly, but surely, he picked up the nickname "Captain Naps." He'd build a pillow fort on the couch and settle in. 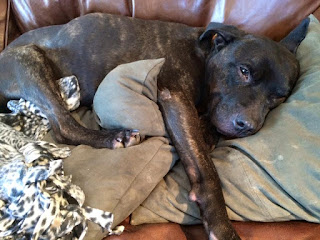 Sometimes his napping was so sound that he'd sleep right through the arrival of one of us through the door. Then suddenly he'd wake up, startled, barking an alert: "Invader! Invader!" <pause> "Oops. It's you! Hi!!" and he'd wiggle and wag.

Always the tail would wag. Cyrus was so pleasant that, in what turned out to be his final weeks, when he was going to a water-treadmill physical-therapy routine that he hated, he'd still wag his tail through every part of the adventure except the time in the water tank, and he'd even wag there a little. We used to joke that if we just took him on rounds through our town to meet everyone, he would have been elected mayor soon thereafter.

But old age is rough. Cyrus didn't just have arthritis. There was more going on inside. A few months ago, an ultrasound to try to figure out the source of stomach problems revealed a mass on his spleen. We spend a lot of money on our dogs' medical care, but we also try to take a balanced approach to pain management and comfort for them. And surgery to do a biopsy on that mass seemed like too much for a 12- (or 13, or 14) year-old dog. Back then, we knew the clock was ticking. (The clock's always ticking, by the way; hug your loved ones, canine and otherwise).

We had a few months after that of helping him through daily struggles. The stairs became a really big deal. Getting onto the couch required assistance. He was tougher than most dogs to read because his pain tolerance was so high. He never whined. But he grimaced and grunted a little. And he fell down the stairs more than he grimaced. He'd "run" out into the yard, and faceplant when his back legs would just stop working. The faceplants and grimaces were getting more frequent.

A few days ago, my wife -- who is really good at these decisions (I tend to wait a little too long) -- said to me, "I looked in his eyes today and I don't think he is happy anymore. He's still trying to be the tail-wagging guy that we love, but he's really miserable." And sure enough, Cyrus had begun spending almost all his time hunkered down on a dog bed, looking sad.

So yesterday we did the right thing, with a vet who loved Cyrus so much that she actually apologized at one point during the procedure for getting a little emotional herself. "Sorry guys, I'm probably not helping here," she said at one point. No, she was definitely helping.

We're getting awfully experienced at handling all these end-of-dog-days decisions. In less than four years, we've had to make the tough call on three different elderly dogs. But every time, as you hear that big sigh as they let their last breath go, you know you made the right move. He was sad and hurting; he's not anymore.

Thanks, buddy, for some great times. It was the shortest stay ever, but you packed a lot of love into three years. 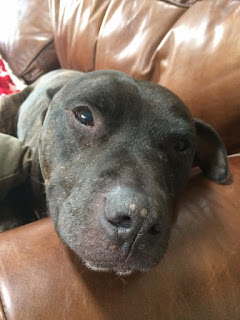 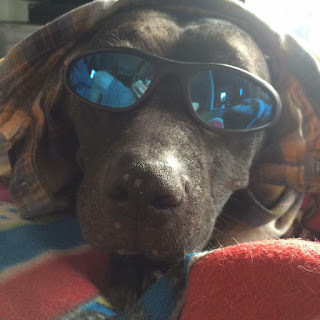