Three quick facts about me:

1. I'm one of those people that is inexorably drawn to self-experimentation.
2. I can start a habit -- good or bad -- in the time in takes most people to eat a meal.
3. I can quit that habit, purposely, with relative ease.

Here's a fourth: I'm not great at what I'll call "extreme moderation."

All of this plays into the fact that, at age 54, for the first time ever, I have just lived 55 days on this big blue orb without taking a single drink of alcohol.

And I am really and truly sorting out how I feel about the whole damn endeavor, so this post is going to be a bit more of a ramble than usual, I'm afraid. ("Is that possible?" you might justifiably ask yourself).

I've done Whole 30s previously alcohol-free. I've even gone as long as six months with incredibly infrequent alcohol (like about five or six drinks during that time), but this is the most, er, absolute I've ever been about my abstinence.

And I kind of love it.

Weirdest of all -- particularly for a guy that digs peaty scotch whisky and red wine as much as I do -- I am not consumed by a burning urge to revert to boozing anytime in the near future.

Weird stressors that happened while I was teetotaling:

1. Donald Trump got elected president.
2. Thanksgiving.
3. We had to euthanize a lovable, but very ill, elderly dog.

I still didn't drink. A number of people remarked to me that they have no idea how one or more of those events did not alter my no-drinking plan.

But this stunt of mine was never about addiction. Yeah, I had re-established a bit of a habit of what I call "reflexive" drinking. You know... come home from work and pour one, and it's down the hatch before you've even really considered what you're doing. But, like I said, I can quit most habits as quickly as I can start them. (Ask me about the dark-chocolate-covered sea-salt caramels that somehow made their way into our house over Thanksgiving. Habitually eating them since then? Oh yeah. Fear not, though; the package will be empty soon).

Rather, it began as something about something about sleep and fat loss and just feeling great. I'm not fat, but I could tell my body fat was up a bit in the early fall. I also knew -- as I told you here -- that I had pretty much firmly established a pattern of always waking up in the middle of the night if I'd had alcohol, and then having trouble getting back to sleep. When all that happens, I know that hormonal levels get effed up (a technical term) and reduced testosterone also means increased cortisol. Cortisol is a fat-storage hormone. This stuff's all interconnected beginning with how alcohol makes your T levels drop.

To quote myself at the time: "Oh fuck it, I'm not going to drink at all for a while and see how I feel."

55 days later, I am goddamn annoyingly rejuvenated. I have considerably more energy, feel ten years younger, less sluggish, have lost minor "love handles" of fat, and look pretty fucking good naked for an old guy, if I do say so myself.

I even got a "mindfulness" tattoo to celebrate. 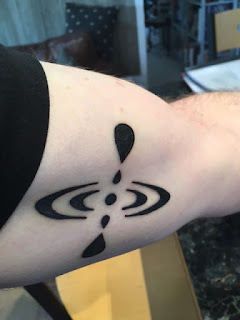 I have no idea. I'm not currently in a drinking mood at all. I am most certainly in a feeling-good mood -- and looking pretty good naked is OK with me too.

Conversely, I'd be shocked if I didn't drink again. Conversely to that, I don't really want to drink again yet.

It's all pretty confusing.

So I am arbitrarily going to check back in with myself around the 75-day mark, and, if no alcohol is in my present or my (near) future at that point, I will check in again at 100 days. And so on.

Basically I have no fucking idea, and I'm rolling with the good feeling.

Someone said, "The best revenge is living well." I'm not getting revenge for anything. But living super clean feels absurdly great at this exact juncture in my life. It wouldn't have five years ago. It definitely wouldn't have before that. But this "life" stuff is all a constant exercise in self-improvement, right? Or at least that's always been my take on it. And right now -- in this very mindful present moment -- I feel fucking fantastic.

The only certainty is that the tattoo is permanent. And I'm good with that.