Maybe it's because I've spent most of my adult life in them, but there's an organic thing -- a chemistry thing -- that happens in a real honest-to-bejeezus band that's way different than just some guy (or woman) fronting a bunch of hired guns who don't particularly have anything invested in the whole operation. In its ideal form, a band is a living and breathing entity that stumbles and falls and soars and swoops and dives with a beautiful, freakin' noisy, but coordinated, purpose. To employ an entirely different metaphor, it's also a beautiful machine, and every member is an essential cog.

When I bought tickets a few months ago to see Aussie singer/songwriter Courtney Barnett, I remember thinking, "I dig the first couple EPs. I really dig the new album. But I'm curious to see how riveting this whole 'singer/songwriter' thing really is going to be live." 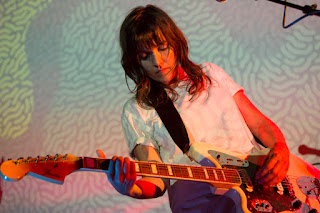 Yeah, I'd heard a few live clips, and I knew that Barnett and her bandmates -- drummer Dave Mudie and bass player Bones Sloane -- definitely turned up live and that it'd be.... well, good, but great? I was a little skeptical. Seriously, it's that "singer/songwriter" tag, I tell ya. I didn't really go into this with hopes super high for a mindblow.

So much for pre-show prejudices. Really, I had no idea what I was in for.

This band has been on the road a lot lately. Bands -- real bands -- get road-tested and road-worn and road-awesome. The CB3, like it says on the drum kit, is definitely road-awesome at this point.

At Union Transfer in Philly last night, the set went like this. And I'm not going to drag you through every moment. But let's just say that if you showed up hoping to hear clever Courtney play whimsical folk songs, you'd have been sadly disappointed. From the opening, "Hey!" this was a band -- a fucking band -- on a mission. What they did, for instance, to "Canned Tomatoes (Whole)" was nothing short of captivating. You could see that they were still perfecting all the twists and turns of an amped-up arrangement. Courtney bounced all over, working sheets of distortion and volume swells out of her guitar (no need for a second guitarist in this band). Bones leaped and locked in tight with Dave, who controlled all that dynamic tension with power and skill. They killed. I was sold.

I'm an asshole for ever having doubted them in advance.
(In retrospect, I should have known when they were playing "I-94" by Radio Birdman through the PA beforehand that this wasn't going to be an ordinary show).

Almost everything was a highlight, but if you want the cream of the crop, it was the aforementioned "CT(Whole)," the big build in "Kim's Caravan," the opening "Elevator Operator,"the predictably grunge-o-licious "Pedestrian at Best," the always manic/sloppy/wonderful "History Eraser" and an unexpectedly more-gorgeous-than-the-original solo take on You Am I's "Heavy Heart."(There's your clever "singer/songwriter" vibe, I suppose, on that last one). To give you an idea of how much Courtney and the boys revved up the originals, frankly their cover of "Cannonball" by the Breeders seemed unnecessary; they rocked harder than the Breeders anyway....

I went into this show thinking that, yeah, it'll be good. I left committed to catching this band every fucking time they come through my fair city. Hells yeah, CB3. I raise my glass to you, and apologize for my pre-show doubt. I'll be there next time, and you'll be even better, I bet.

**************
A quick "Nice work!" goes out to the two openers. Aussie Darren Hanlon walked up onstage with an acoustic guitar, sang a bunch of songs that would make Billy Bragg a little misty, and left everyone in the place thinking, "Yes, I would totally hang out with/shoot the shit with/get drunk with that guy." Chastity Belt, from Walla Walla, WA, pretended to be from Melbourne, played a Liz Phair/Scrawl hybrid that left me wanting to hear more and generally looked like they were having the time of their lives on this tour. Yeah, I would dig it even more if the drummer rocked out a little heavier and left the low-fi Maureen Tuckerisms behind, but they were cool and full of dynamic tension and I would see them again. What is more fun than seeing a band -- there's that word again -- enjoying the ride? Nothing. That's what. It was a Monday night. And it fucking ruled.