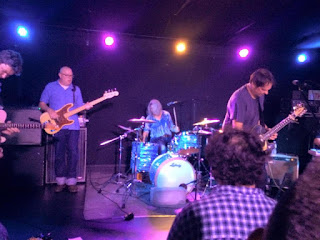 I was outside in a line waiting to get into the club to see the Meat Puppets. Guy #1 in front of me asked Guy #2: "Hey man, you know anything about this opening band Eleventh Dream Day?" He didn't. I interrupted them: "They're awesome. They are at least half the reason why I'm here. I love the Meat Puppets, but these guys are killing it. Their new album is all I've been playing lately. Just layers and layers of guitars. It's like X and the Velvets mixed with Crazy Horse." The two guys, in their best Philly accents: "Whoa. Noice!"

Fast forward to the end of the EDD set that night. Guy #2 comes crashing/careening through the crowd to find me. "Duuuuuuuuuuuuuude!" he shrieks to me, grabbing my shoulders, and shaking me. "That was fucking unbelievable!"

Guy #2 was right on the money to get so wound up. At the time the band was touring what is still, for me, a Desert Island Disc called Beet. From its opening salvo of "Between Here and There" about the joys of "the MC5 way past midnight" through the closer, "Go," the album roars and rumbles and twangs and slides and shouts and just fucking rocks like little else from the time period. The X/Velvets/Crazy Horse comparison that I gave that night? I don't think I can do any better than that. They carved out a special part of the musical universe all their own on that record. The harmonies are gorgeously jagged, the guitars overdriven and the tales of the seedier side of life are spot-on observational genius. (For no finer example of those lyrics, check out: "Teenage Pin Queen"). And live? The ante was upped considerably from the album. I was, instantaneously, signed up as a fan for life of this band.

So I've seen them a bunch of times over the years since then, but while they've never lost the intensity of their live shows, the frequency of their tours has dwindled quite a bit from the early days. Kids and marriages and divorces and jobs and all that heavy shit of life can seriously get in the way of a band. Many have collapsed under a lesser weight. But EDD keep soldiering on, just not quite so often. They'll give us a new album every three, four, maybe five years since the mid-'90s, and maybe a really short tour thereafter. In fact sometimes the "tour" is just a New York City show or two plus whatever they put together a little more frequently in their home base of Chicago.

So when I saw there was a new album -- called Works For Tomorrow -- coming out this summer, I started checking for a NYC date. They hadn't played Philly in years, so I was expecting to have to travel. Sure enough, August 21 at the Mercury Lounge! I was in. Tickets were bought; plans were made. It was even an "early show" with doors at 6:30. (I'd be lying if I didn't fess up that my old self dug that part).

Then, two weeks later, a Philly date was announced at Johnny Brenda's the night before the NYC show. In the spirit of YOLO, I said, "Oh, what the hell. It's been a few years. I'll see them twice in two nights."

I chose well. Philly was great. NYC was several levels of stunning way past "great."

Little things, like where you happen to choose to stand, really matter at a concert, especially in a small club. I picked a spot in Johnny Brenda's -- at the bar only a few feet from the side of the stage -- that has served me well in the past. But that night, I lost a little in the sound mix. I was stationed a bit too close to Mark Greenberg's keyboard amp and a bit too far from Jim Elkington's guitar amp on the other end of the stage. I could see that Jim was playing different, complementary riffs to Rick Rizzo's slash-and-burn ones, but I couldn't always hear them in Philly as well as I wanted. They were getting lost in the keyboards. (I know... why not move, dumbass, you might ask? Uhhh, because I was settled in nicely at the bar and the venue was crowded enough that I would have either had to go to the back of the room or plant my 6'3" frame right in front of someone already standing in a premium spot -- a dick move that I try to avoid. So I stayed put). And let's not overstate the sound issue; the show really was great. The set focused heavily on the new album, highlighting just how clear it is that this band may have just released their best record since the mid '90s. But "Bagdad's Last Ride" (from Beet) seemed a little less urgent than usual, and the Wipers cover ("Taking So Long") seemed a little flat, energy-wise, as well. The show finished, however, on a huge uptick in energy, with "Orange Moon" building into a wall of power and fury and "New Rules" letting Rick take us to places on the guitar solo that sounded a whole lot like Weld/Ragged-Glory-era Neil Young. Sandwiched in between those two was a chance for Janet Bean to get out from behind the drum kit, replaced by Greenberg, to sing a bluesy wailer that had her bouncing all over the stage.

I left thinking, "Damn, they still have it going on." But I also thought that maybe I could do even better in NYC with a little strategic placement of myself a little closer to both guitars. 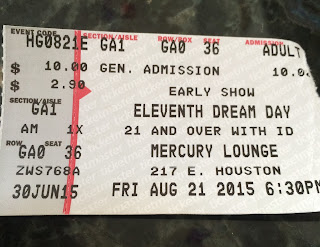 After arriving at the Mercury Lounge the next night and having a quick drummer's conversation with Janet (It began: "OK, so I saw you guys last night in Philly and I have a totally dorky question: what is up with that bent-up ride cymbal of yours? It's wild!" Seriously, I never ask "gear" questions, but that crazy cymbal warranted some inquiry, and possibly now warrants some shopping....), I declared to my friend Pete, with laser-like focus on the sonic prize at stake: "OK, so we can hang back here for Antietam, but then let's go up there for EDD," pointing to a spot in the front just between where I knew Elkington and Rizzo would each be attacking their guitars. I explained the sound-mix issue of the previous night, and Pete agreed with my ultimate conclusion: "What we lose in hearing will be made up for in rock."

That turned out to be the understatement of the year. I shit you not when I tell you that even though the NYC set differed song-wise from Philly only in one respect -- swapping out "New Rules" for a burning slide-guitar-filled encore of "Tarantula" instead -- every single song was better in NYC. You could simply chalk that up to getting our heads torn off in NYC by the Verlaine/Lloyd guitar interplay of Rizzo and Elkington, and you'd be mostly right, but it wasn't just that. Janet was attacking the drums with a little extra energy at the Mercury Lounge. Everyone in the band looked, and sounded, more "on" at the NYC show. Did the earlier start time play into that? Maybe. I can personally testify that rocking out in one's forties and fifties requires considerably more caffeine than it did in my twenties, and I'll always take an earlier start time to a later one. (In fact, I read somewhere recently that the Mekons simply will not take the stage later than 11 pm anymore, which is about when EDD started in Philly). But whatever it was, it all just fucking smoked at the Mercury Lounge. They were a force of nature.

The new album shone mightily, with particular nods to "Go Tell It" and "Cheap Gasoline" as standouts, but, really, the NYC versions of every song that they played from that one -- and they played nearly all of it -- made it clearer than ever that the new record is nearly the equal of their late '80s and early-'90s perfection. Bands that have been around that long just don't pull off that trick very often, but EDD has done it. And the rest of the set had a little extra kick as well. "Bagdad" shook off the cobwebs from the Philly version and, instead, Elkington and Rizzo transported us right back to 1989, as if Rizzo and his old guitar partner Baird Figi were wielding their frantic firepower of yore on the Beet tour. The Wipers cover had all the urgency of the original, and "Orange Moon"???? Whoa. I thought they had done a mighty version the night before, but I had no idea what we were in store for in NYC with that one. "Matt Rizzo! Your momma wants you onstage right now!!" Janet Bean called from behind the drums, summoning her and Rick's son to the stage to add to the roar with a third guitar. The steady build of "Orange Moon" into a kerranging thundering beast is ordinarily a thing of beauty, but add to that the beaming looks of the proud parents as their kid joined them to make some noise and, damn it, I thought that it just doesn't get much better than this. Janet hit the drums a little bit harder on that one, and I thought Rick's slashing and soloing were going to rip every string off his guitar by the end of it. Passion, enthusiasm, dynamics -- really... that rendition of "Orange Moon" had it all. I've seen them a lot over the years, but they've never been better than that single moment. 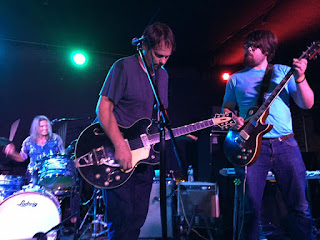 By the way, special kudos to the two openers from Philly and NYC whose sets I caught in full. Chris Forsyth and the Solar Motel Band put on a riveting clinic on the art of the well-focused jam. I think they played only four songs in their 45-minute set -- a potential recipe for self-indulgent disaster -- but, instead of wandering too far into excess, the band locked down in hard jazz-influenced grooves that gave the two guitarists just enough room to explore without ever losing the attention of the listener. I hadn't run into them before, despite the fact that they're centered in Philly, and I'll be seeing them again as a result of that set. And Antietam? I have seen them so many times over the years, often opening for other bands, like Yo La Tengo, and they are always solid -- with the noteworthy guitar skills of Tara Key prominently displayed each time -- but this set, with horns on some songs, a backup singer on many others and a hook-filled selection of songs, was the best I've ever seen them. It was the perfect lead-in to the glory of the EDD set.

It was a hell of a 24 hours.... I imagine that, their busy lives being what they are, it may be a few more years before I get to witness another Eleventh Dream Day show. I'll be there, and this pair of them will carry me through for quite a while until then.