A Scottish-tinged Tale of Thanksgiving 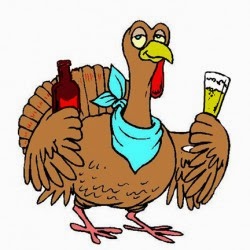 Thanksgiving is always the holiday most likely to bring American extended families together to laugh, cry, smile, fight, and generally run through the whole gamut of available emotions in one long day of food, gratitude and, quite possibly, something a little more unsettling. But one particular Thanksgiving a few years back had an extra potential air of chaos about it. We had a lot of people at our house. Every bedroom was full of guests and there were extras around for meals. It had the makings of a circus to it.

But really, like Bob Dylan once sang, we had "no idea what kinda shit was about to go down."

Dinner was early and relatively uneventful, but then a bunch of us settled in for a post-prandial board game of some sort. Trivial Pursuit, I think it was, or maybe Apples to Apples. Anyway, the gaming  went pretty smoothly, but an astute observer of the evening's festivities would note an undercurrent of, er, Scotland creeping into the proceedings.

See, a few of us were already fans of single-malt Scotch, but a couple more joined in the imbibing that evening, and, while my own consumption was pretty mild that night, I noticed that Phil -- an older relative -- and his 40-something son Mike were pouring Phil's favorite brand with abandon. We have these stubby glasses that appear perfect for a beverage on the rocks, but one needs to be careful. The glasses are short, yet exceedingly wide, and their width is so deceiving that they hold 500 ml of liquid when appearing to handle only maybe half that amount. That's half a liter, kids, for those of you who speak Canadian -- or a bit more than a (U.S.) pint for the less-traveled Americans among us. When used as a whisky glass, even with the room taken up by the ice with which they were polluting their beverages (yes, golden rule of Scotch whisky: neat, my friends… neat), "careful" was plainly the operative word.

But both of them were staying the night -- with their wives -- so I wasn't terribly concerned when the board games ended and the on-their-way-to-soused father and son stayed up a bit later. They had a long history of getting along well, but in recent years they hadn't seen each other as much. So when they launched into another tale of their days at a friend's hunting cabin in the north woods, it seemed both like time for the rest of us to go to bed, and a good opportunity for them to bond at the kitchen table over a pair of quickly-draining bottles of single-malt. "Those two are hilarious," I remarked to my wife as we headed upstairs to bed. "Oh, let 'em have their fun," she replied. "It's good to see them get along so well, and they are reminiscing up a storm about the old hunting trips up north."

A couple hours later, long after we fell asleep….

"Steve… what the hell is that in our doorway?" my wife asks as she nudges me awake. I look over and then hear Phil, who is supposed to be sleeping downstairs, but who, instead, is at our bedroom door, mumbling: "So. Confused. It doesn't make any sense at all. Where? Steps? There aren't steps...." Before I can compute exactly what he is talking about, and say any more than, "Oops. I think Phil's loaded and wandering the halls," my wife says, "Phil!? Phil, what are you doing in the hallway outside our door?"

Phil doesn't really acknowledge her until she actually goes over to him, and then he says, as if delightfully discovering a winsome lass with whom he would just love to converse at a garden party, "Oh! Hello, miss! Well, who are you?" This sends me into spasmodic fits of laughter that I try to bury in the pillow.

It turns out that Phil had so many glasses of whisky and had shot the proverbial shit for so long about the hunting cabin that he awoke from his eventual drunken slumber believing that he was, in fact, in the hunting cabin -- where there is no second floor, and where my wife has never been.

Hence... Phil's understandable confusion that he was "upstairs" talking to "Jamie" in "New Jersey."

But, after a few moments, the dust settles and Jamie manages to walk Captain Confusion back downstairs to his bedroom where, at this point, his wife Louise is filled in on the details of Phil's liquid-fueled somnambulance. She says she will close their door, so he won't wander anymore.

<CRASH><CLATTER><CRASH> sounds from the kitchen wake us up.

J and I lie in bed for a couple minutes. first listening to Phil talking to himself in the kitchen and bumping into things, and then wondering if Louise -- who we also thought we heard -- had this one under control. But, unclear that just rolling over and going back to sleep would be a satisfying or sensible choice at that moment, I say to my wife: "You handled the last one. I'll get this one."

It's hard to adequately convey what goes through one's mind when in the middle of one's kitchen at 2 a.m. stands a man -- a very drunk and confused elderly man wearing only a not-very-dry-at-all pair of tight whiteys -- who has emptied two things onto the kitchen floor: (1) his bladder and (2) the entire contents of the cabinet under the kitchen sink where he believes (actually quite correctly, somewhat quixotically) the cleaning products are stored with which a hypothetical person who is actually in control of his faculties might begin the process of cleaning up item #1.

But I can assure you that that hypothetical person was not going to be me.

Louise appears and, fortunately, agrees that, because it was her beloved, not mine, who had decided to mistake the kitchen for the bathroom, she will handle the cleanup. So while she gets Phil a dry set of clothes, I corral the dogs who were dancing in circles, fairly shocked that Some New Guy could just let it rip in the kitchen like that when they would certainly get clobbered for the same behavior. I put them outside, and Louise sets out to clean up Lake Urine while I talk to Phil.

"Phil. Dude. Had a little whisky, did we?"
"I think I need to go to the hospital. I think something's really wrong. I am losing my mind."
Louise chimed in, her mood, er, dampened by her current task: "PHIL!! You are stinking drunk!! THAT'S the only problem!! No one is going to the hospital!!"

What then ensues between them is a rather lengthy soliloquy by Phil on what he claims to be a prevalence of dementia in his family history, punctuated almost rhythmically by Louise's increasingly irate -- yet undoubtedly correct -- retorts that Phil is "just loaded" or "completely fucking drunk." Phil is convinced he is suffering from some sort of rare, acute (make that really acute) early-onset Alzheimer's. Louise is, rightfully, unconvinced of the crisis nature of the matter, but is getting nowhere with him. I decide to try to play The Voice of Reason while she cleans more:

"Phil, those glasses you guys were drinking from? Those are half-liter glasses. You drank a lot of whisky."
"Oh my god. I had four or five of those. With a lot of ice, but still…."

"But," deep and abiding concern comes across his face again, "I don't want to lose my mind. And I think I am. I need to go to the hospital."
"Phil, you need to go to sleep. You drank too much."

He pauses again, and -- as serious as a patient who just received a terminal-illness diagnosis -- looks me in the eye and says, ignoring what has to be my severely strained attempt not to bust up laughing: "Steve, do you really think it could have just been the Scotch?"

Phil shuffles off to the bedroom. Louise had just finished The Big Cleanup and asks me if I would just hang out in the kitchen for a minute or two while she grabs a smoke outside, just in case Phil makes one more appearance.

I agree, and, sure enough, just a couple moments later, out stumbles Phil from the bedroom, both fists full of … prescription-pill bottles, some already open. He dumps them onto the kitchen counter. It looks like Keith Moon's dad has showed up to party.

"Holy shit, Phil! What are you doing?!"
"Gotta take my heart medicine. I got so drunk I almost forgot."
"LOUIIIIIIISE!" I yelled. "I think we need you in here!"

There appear to be 15 different, undoubtedly contradictory, medications on our counter, and Louise springs into action, putting the kibosh on Pharmacy Time, doling out what I think was just an ibuprofen to Phil, and confiscating the rest "until you sober the hell up tomorrow." This time Phil goes to bed and stays there.

Somehow my wife had fallen asleep upstairs during this whole episode ("I figured you had whatever it was that Phil was doing under control," she said later in her typical calm way), and so, when I return to our bed, exhausted, full of Thanksgiving gratitude that we hadn't reenacted a drug-overdose episode of C.S.I. New Jersey in our kitchen, and she asks: "What happened?" all I can muster is a promise to fill her in on the details the next day. And so Friday morning, I tell her all about what Arlo Guthrie might call the Great New Jersey Thanksgiving Kitchen Masacree while Phil and Mike sleep in late and nurse all-day unenviable and utterly predictable hangovers.

Postscript: Phil and Louise have been back to our place for many a Thanksgiving dinner since this episode, and I don't think he has once opted for anything stronger than a glass or two of red wine. Heh.